If all goes according to the government’s Food Truck Pilot Scheme, Hong Kong will be seeing distinctive food trucks on its streets by the end of the year. Though with a restrictive policy, confused intentions and an utter lack of context, it would appear the trucks are heading into nothing more than stationary traffic.

Parked in an orderly row along the waterfront, the trucks’ individual colours and decorations emitted an almost carnival-like atmosphere. Many had arrived before noon to set up shop and by 1 pm, long queues had formed outside the trucks, each person waiting their turn to grab one of the many lunch options on offer; from a simple grilled cheese sandwich to the more elaborate Spanish paella still simmering in the signature giant wok. Those just arriving went from truck to truck, looking at the menus on offer  to pick their fancy while those with lunches in hand searched for sitting space among the wooden patio furniture that had been set up to one side. A few simply dug into their lunches standing on the spot, the aroma of the freshly cooked food proving too tempting to resist. This could have been what Hong Kong was anticipating when the government announced the food truck scheme in the 2015-2016 Budget Speech; an alternative option to brick-and-mortar restaurants, serving delicious food at an affordable price. Unfortunately, the scene described above is in Canary Wharf in London, not in Hong Kong, and given the way in which the government intends to implement food trucks, it is unlikely such a scene will ever occur here.

Since the announcement of the initiative in February 2015, Secretary for Commerce & Economic Development Gregory So has been developing the idea of food trucks – complete with visits to Sydney to see them in operation – finally culminating in the Food Truck Pilot Scheme announced on 30 March 2016. Looking at his proposal, however, it would appear the time spent on research has been a complete waste, with the proposal demonstrating a fundamental lack of understanding of what makes food trucks work. The success of food trucks does not rely on the novelty of food being served from a kitchen-on-wheels – as the government seems to think, judging from the way it wants to regulate licences – but is dependent on offering an alternative food option, provided by the proprietor directly to the customer. 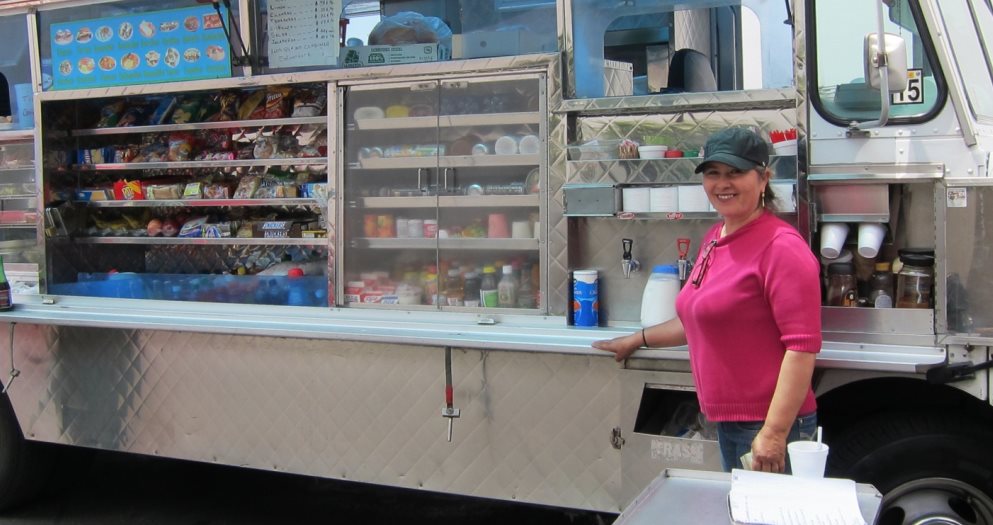 The development of  modern day food trucks traces their history back to very humble beginnings, as pushcarts filled with snacks and drinks for cowboys and workers in the American Wild West during the late 1800s. Later, with the development of the automobile, trucks with basic cooking facilities parked outside construction sites, factories and other blue-collar locations to serve workers looking for a quick and inexpensive way to fill up during the day. Because of the simplicity of these early trucks, most of the meals served consisted of basic processed foods such as hot dogs, sandwiches and pies.

It was not until the last decade that the gourmet food truck emerged on the scene. Originating in Los Angeles – the city most associated with automobile culture in the US – chefs out of work from the 2008 economic depression took to food trucks as a way to get back in on the culinary scene. With their ambition and talent, the food coming from food trucks was transformed from simple hot dogs and hamburgers to food you might find on menus in hip restaurants, such as pulled pork sandwiches, BBQ steaks and the standout Korean-Mexican fusion kimchi burrito. The food truck became a symbol of liberation from the often corporate and tightly regulated restaurant scene; an example of a grassroots response to the public’s desire for good food at reasonable prices.

Crucially, the start-up and operating price of a food truck was much less than that of a brick-and-mortar restaurant. Often, the person working inside the truck was the owner and chef of the food truck, cutting out a lot of the hassle related to a full-scale restaurant and allowing him or her to focus on the food. Independent of landlords, food trucks were also free from the high rents which often choked young and developing restaurants, a story all too familiar in Hong Kong. The low cost of starting a food truck business also meant it provided a way for chefs to get in on the culinary scene. It was not unheard of for food truck businesses to expand over time into a fleet and branch out into storefronts as their reputation grew, as was the case with Los Angeles-based gourmet ice cream vendor Coolhaus.

And therein lies the problem of food trucks in Hong Kong. For the pilot scheme, those wanting to try their luck at operating a food truck in Hong Kong need to prepare a proposal outlining the type of food they would be offering, the design of their truck and their financial soundness. The entire process reads like a case of over-management and a complete contradiction to the grassroots spirit that gave rise to food truck culture. For food trucks to work, the chef needs to be independent and free to manage the business, something that is highly unlikely given the government’s tightly regulated approach to licences. When questioned about the seeming difficulty in joining the scheme and the possibility of corporations having a monopoly on the licences, So emphasized that the screening process would consider cuisine creativity and the design concept of the proposed trucks in addition to the amount of funds put in. Sadly, even this response seems to go against the “get your hands dirty” and experimental culture of food trucks. Part of the excitement of food truck dining comes from the improvisation and spontaneity of the individual chef, not a menu that has been pre-vetted by the government. Given the difficulty in obtaining one of the food truck licences, who would be willing to take the risk and experiment with their menu, so crucial to making food trucks appealing?

In the pilot scheme, the Hong Kong government is limiting licences to twelve food trucks operating in six locations around Hong Kong. Of the six locations, two are Disneyland and Ocean Park, presumably in the parking lot outside the entrances. The others are the Bauhinia Square in Wan Chai, Central’s Harbourfront Promenade, and Salisbury Garden and Art Square in TST. The locations are so preposterous that even a Google search didn’t reveal where Art Square was.

These six locations were presumably chosen because of the ample space they have available for the food trucks to operate, a key factor in the success of food trucks in cities overseas. It is no coincidence that the rise of the gourmet food truck came from Los Angeles, a city well known for its automobile culture. Los Angeles is a city built around the car, with ample infrastructure such as parking, allowing for food trucks to thrive. Inversely, Hong Kong is a city more known for its lack of space and traffic congestion. It is hard to not see the government’s initiative for food trucks as a mere superimposition of foreign culture into Hong Kong, taken hugely out of context without considering whether such introductions are suitable for the city. Should the government finally decide to wake from its “everything-imported-is-better” mentality and promote authentic street food culture in Hong Kong, the city has a treasure trove of history on which it could draw. Traditional street hawkers serving curry fishballs, cart noodles and for the more adventurous, deep fried pig intestines, may not be the government’s idea for Hong Kong’s image as a “world city”, but these comforting snacks and meals are undoubtedly part of Hong Kong’s heritage. Arising from the demand for quick snacks and affordable food options, while aided by the low start-up cost (sound familiar?), street hawkers filled a niche in Hong Kong’s culinary options and became part of its urban landscape during the second half of the 20th century. As they grew in numbers, their often poor sanitary conditions became a cause for concern, leading to their eventual demise as the government cracked down on street hawking.

Certainly, the reintroduction of hawkers, food carts, and by extension, dai pai dongs may send the Director of Food and Environmental Hygiene tossing in her bed at night, let alone the promotion of them to tourists from around the world. Yet with proper regulations, these forms of street food could be brought up to an acceptable health and safety standard. Their method of doing business in the past may have been seen as unsanitary, but with proper monitoring, how are their methods of preparing food different from the food trucks being promoted today?

And who’s to say hawkers and dai pai dongs must be limited to offerings of unhealthy comfort food? As food trends develop, could street hawkers and food carts be offering organic New Territories grown vegetable buns and fresh tofu fa with locally produced honey? Hong Kong may be striving to become a world class city, but that doesn’t mean having to destroy its own identity in doing so.

Perhaps it is time for the government to stop its habit of seeing all foreign imports with a tinted lens and actually embrace local culture for a change. Rather than looking at the streets of Los Angeles or Sydney for inspiration on the next food craze, look instead at the streets of Yau Ma Tei and its famous Temple Street. Sure, it means there won’t be any more photo ops on business trips to Sydney, but we might at least end up with something local that we can uniquely call our own. And who knows, maybe before long overseas officials will be visiting Hong Kong’s streets for photo ops with our very own street hawkers and their humble food carts as an example of providing quality street food.

Food trucks: Why the government’s scheme completely misses the point