The brother of a Chinese dissident has allegedly issued a statement and appeared in an ‘interview’, denying the claim that he and his family members were kidnapped. The dissident has stated that he believes neither, and said that a television interview with his father is due to be broadcast soon.

Germany-based journalist Chang Ping, whose real name is Zhang Ping, said his two brothers and a sister were kidnapped in Sichuan province last Saturday, after he wrote a commentary for Germany’s Deutsche Welle (DW) regarding an open letter calling for the resignation of Chinese President Xi Jinping.

On Monday, Chang claimed that his younger brother Zhang Wei had passed on three requests the police had asked for in exchange for their release. One demand was that he must ask for a withdrawal of his DW article – which Chang said was proof of “political prosecution“. Sichuan’s provincial police later said that his father and two brothers were being investigated for causing a forest fire. A statement and a photo of Zhang Wei, Chinese dissident Chang Ping’s brother, were posted on a Chinese semi-official website. Photo: scol.com.cn

The statement, allegedly from Zhang, was posted on a Sichuan semi-official news site scol.com.cn on late Tuesday night.

In it, Zhang claimed that he went home to Xichong County in Sichuan on Saturday for his father’s birthday and that he heard from family members that Chang had posted speeches attacking the Chinese Communist Party and the government from outside the country. He then asked him through multiple channels to stop.

Zhang then admitted responsibility for a forest fire which caused “huge losses”, but was allowed by the police to celebrate his father’s birthday on Sunday morning, before going to police station to assist in an investigation.

“We are very thankful for the respect and understanding the police station has given us,” Zhang wrote. “The police at the station did not ‘kidnap’ our family and did not harm us physically.”

He said that he was “very disappointed” after unsuccessfully urging his brother to “stop publishing speeches that are untrue” and “maliciously attacking relevant authorities and officials”. 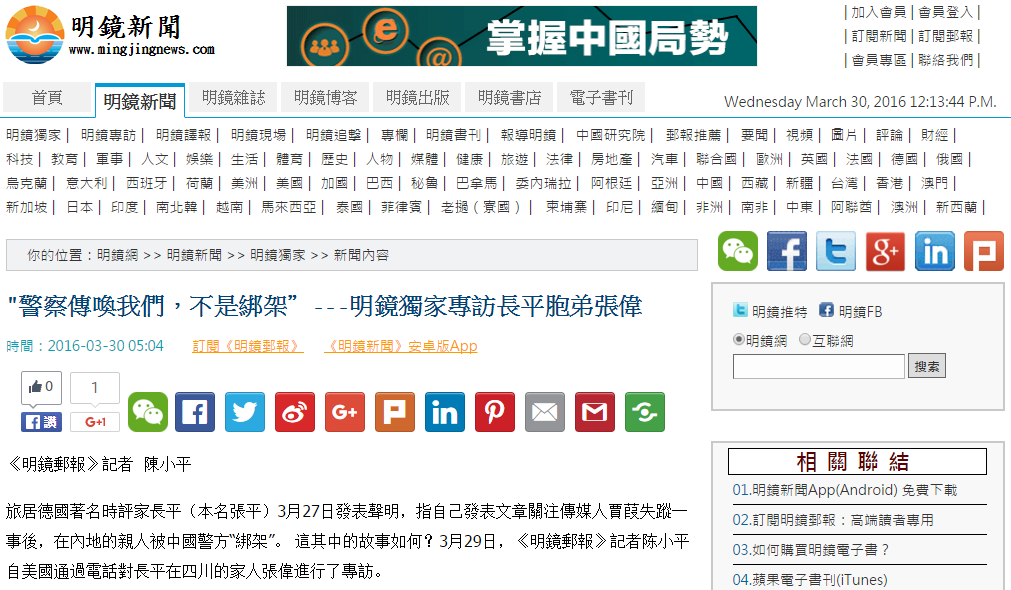 The interview posted on Mingjing News.

On Wednesday morning, New York-based Mingjing News – which is banned in mainland China – published a phone interview with a person who claimed to be Zhang Wei.

In the interview, Zhang said that the five members of his family would assist with the arson investigation, even if they were not summoned. He said that the the police officers did not talk to them about anything other than the forest fire during the investigation, and added that no one had given them instructions on what to say.

“[Instructions] do not exist, we are wise people, we speak only based on facts. No one has taught us,” Zhang said.

When asked how did he know about Chang’s articles, Zhang said police officers talked about the “libelous” articles accusing them of kidnapping, only after the investigation ended. He said the five had now been released. In response, Chang posted a sarcastic Tweet saying that the statement was “written very well”.

“You manipulate a person, force him to do whatever you want, and think people will believe in such a performance?” Chang asked.

“Just like the statement from Zhang Wei made under manipulation was not his statement, it was a statement from the police,” he wrote. “My father’s television interview is due to be broadcast soon. My father is not even an actor, but a hostage.” The open letter to Xi Jinping.

In early March, the semi-official Wujie News published an open letter calling for Xi to step down. It was signed by “loyal Communist Party members” but was deleted a few hours later. More recently, outspoken Chinese journalist Jia Jia and family of New York-based dissident Wen Yunchao were detained, reportedly in relation to the letter. The BBC reported that, including them, 20 had been detained as of last week.

Jia has since been released but he and his lawyer did not give any details on his detention.