Confidence in the future of Hong Kong is at its lowest since April 2003, according to the latest University of Hong Kong poll.

The HKU Public Opinion Programme interviewed 1,001 Hong Kong people between 14 and 18 March in a recurring poll held once every three months.

The results showed that Hong Kong people’s net confidence in the future of the city and One Country, Two Systems dropped “significantly” by 13 and 15 percent to -9 and -8 percent respectively. Hong Kong people’s trust in the local government also plunged 14 percent after an upward trend last year – it now stands at -6 percent. Between March and December 2015, the net trust figure in Hong Kong government went up from 0 to 8 percent.

The net percentage “swings” are calculated by deducting negative feedback from positive feedback. 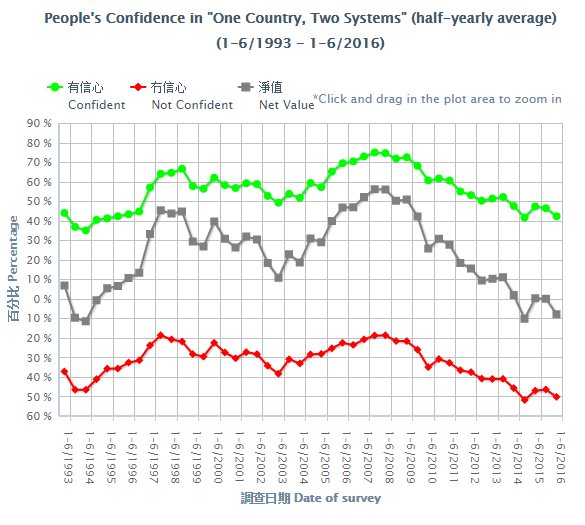 Meanwhile, Hong Kong people’s trust in the Central government plunged 9 percent – now at -10 percent. The figure went up from -9 to -1 percent last year. 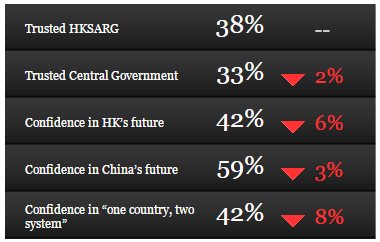 People’s confidence in China’s future remained the highest among the three governments, with a net confidence of 26 percent, although it decreased by 8 percent in the past three months.

“Further analysis shows the younger the respondent, the more one distrusts the HKSAR and Central governments, and the less confident [they are] in One Country, Two Systems’,” Frank Wai-Kin Lee, research manager of the programme, said.

Over 70 percent of the interviewees between 18 and 29 years old said they did not trust the Hong Kong and Central governments, and 80 percent of the same age group said they had no confidence in One Country, Two Systems.