Wong Tai Sin looked to try and move themselves away from danger when they took on high-flyers Eastern at Hammer Hill Sports Ground on Sunday, before a relegation “6 pointer” between Yuen Long and Rangers rounded off the fixtures.

Jeff Hardbattle rounds-up all of the action.

Dreams moved back into the top four after a wonderful display at Hong Kong Stadium to leave a shell-shocked Pegasus lingering in 6th place in the league and in danger of falling out of contention for the AFC Cup play off places.

Former Nagoya Grampus and FC Tokyo striker Kenji Fukuda put the visitors ahead right on the stroke of half time with a shot from a tight angle, and late second half goals from Wong Tsz-ho and Chung Wai-keung ensured that the newcomers’ fine form in the league continues.

Pegasus, a regular top 4 side in recent seasons, now drop to 6th place and on the basis of this performance may endure a difficult season unless they can find some consistency in their results. Dreams sit two points and two places above them, though they have played a game more.

Kitchee moved into second on goal difference after a 3:0 victory over arch-rivals South China on Saturday night at Tseung Kwan O Sports Ground, in what was a fiery yet thrilling encounter that saw Kitchee goalkeeper Wang Zhenpeng save a Borja penalty and Bojan Malisic sent off for violent conduct, with the latter venting his anger towards the away fans as he left the field.

Two goals from new Spanish striker Rufino and a header from Akande sealed the points for the home side to lift the spirits of the disgruntled sky blues fans after perennial striker Juan Belencoso was released from the club last week, with banners with “We want Belencoso” and “#GarciaOut” being clearly visible in the stands.

Kitchee are now 4 points behind league leaders Eastern, having played a game more than their championship rivals, whilst South China slip into third place.

Eastern‘s march on for their first title in over 20 years continued at Hammer Hill Sports Ground on Sunday, as the blues overcame a gutsy yet ultimately unsuccessful from Wong Tai Sin.

Both Yuto Nakamura for Wong Tai Sin and Xu Deshuai for Eastern hit the woodwork in the early exchanges, but the latter made amends for his missed opportunity by teeing up Affonso Junior from a free kick, and the Brazilian duly nodded the ball into the net.

Giovane grabbed his 9th goal of the season just after half time with a well-worked goal into the bottom-right corner to put coach Chan Yuen-ting’s men 2:0 up, but there was time for the hosts to grab at least a consolation after Yuto Nakamura put away a penalty a minute before the end of normal time to leave the score at 2:1 to Eastern.

Eastern can go 7 points clear of Kitchee in second place if they can win their game-in-hand, whilst Wong Tai Sin remain just above the relegation zone courtesy of their superior goal difference over Rangers.

Yuen Long tasted victory for the first time this season, and put some much needed breathing space between themselves and the danger zone as they came out on top over Rangers at Yuen Long Stadium on Sunday evening.

Stefan Pereira opened the scoring for the home side after bundling the ball home from close range, but a well-deserved Chuck Yiu-kwok header just after half time restored parity for Ricardo Rambo’s team. Yuen Long rallied, however, and were soon back in front thanks to Stefan Pereira grabbed his second of the game on the hour mark, and Ip Chung-long ended his team’s long wait for a victory eight minutes later with a low-driven shot that eluded substitute Rangers keeper Siu Leong.

Yuen Long remain in 7th place, but are now 4 points clear of both Wong Tai Sin and Rangers who occupy the two places below them respectively. Rangers remain win-less and in big danger of the drop. 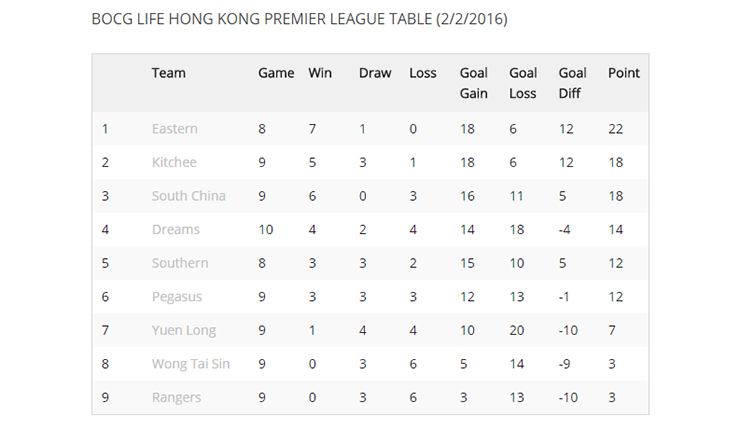 Football round up of the week: Hong Kong Premier League