A little girl shrieks with excitement as she strolls along the beach: “Oh look mummy. Hong Kong snow.”

Despite the cold snap what she’s pointing to is not a meteorological anomaly — but in fact swathes of polystyrene thrown out as rubbish.

The city is suffocating under a film of plastic: “Each day the equivalent weight of two A380 Airbus planes is discarded” in domestic waste, says Lisa Christensen, co-founder of HK Clean Up initiative. Add to this trashed industrial and commercial plastic, and more than 2,000 tonnes of the material is thrown out daily in Hong Kong — saturating landfill sites but also clogging up country parks, coastal areas and waterways.

“For our supermarket generation the focus is on convenience, issues of pollution seem very far away,” says local environmental campaigner Jo Wilson, whose daughter highlighted the “Hong Kong snow” problem.

“People produce double digit pieces of trash — especially plastic — just by having lunch. Hong Kong has an army of cleaners and helpers so perhaps some people are not used to taking care,” she explains, adding a long hours culture, excessive packaging by the food industry, and lack of public education are exacerbating the problem. Globally plastics production has surged from 15 million tonnes in 1964 to 311 million tonnes in 2014 — the weight of 900 Empire State Buildings —  and is expected to double in 20 years as demand grows, according to “The New Plastics Economy” report presented by the Ellen MacArthur Foundation at the World Economic Forum in January.

The situation in Hong Kong is pronounced because it is “an extremely consumption-based society,” Christensen says. “On average we generate 1.36kg (3lbs) of domestic waste per person, per day. Tokyo, on the other hand, only generates 0.77kg.”

– Cheaper to buy new -While there has been some success encouraging people to recycle paper and some metals, the situation is deteriorating for plastics: Just five percent of plastic was sent for recycling in 2014 — compared with 25 percent in 2005, according to government figures.

Recycling is not mandatory in Hong Kong, but efforts by authorities to push the practice have been undermined by media reports revealing items separated after use by consumers have ended up being mixed up or dumped. There is also little incentive for plastics recycling contractors in the city,  — their profits are dented by costs of transport and sorting, and with low global oil prices new plastic is cheaper for manufacturers to buy than reworked material. Due to limited facilities, most items are processed in mainland China.

People should adopt the “reduce, re-use, recycle” philosophy argues Louisa Ho, executive director of The Nature Conservancy, Hong Kong, calling for a wholesale change in the public’s consumption patterns, and warning the city is at “saturation point” with landfill due to reach capacity in 2018.

Plastic bag use has dropped since the government introduced a levy on them last year, but in a city where supermarkets routinely wrap individual fruit and vegetables, campaigners want legislation restricting packaging.

“Plastic wrapping leaks harmful chemicals into our food and bodies, and into the environment,” argues Megan Tanner, who is petitioning authorities and food retailers to take action. A spokesman for the Environmental Protection Department (EPD) said it had to consider “food hygiene” when setting rules.

Critics say there is a lack of joined-up thinking on the issue of waste — for example visitors to the popular “Out to Sea? The Plastic Garbage Project” at Hong Kong’s  Science Museum are given plastic single-use covers for their wet umbrellas, and can only buy water in bottles.

Christensen insists consumer attitudes are changing. The 2015 Hong Kong Clean Up initiative saw tens of thousands of volunteers collect a record 5.6 million pieces of trash in just a few weeks.

“This is the equivalent to dumping the contents of one garbage truck into the ocean every minute. If no action is taken, this is expected to increase to two per minute by 2030 and four per minute by 2050,” it stated.

It also warned that within 35 years there would be more plastic than fish in the ocean, measuring by weight. 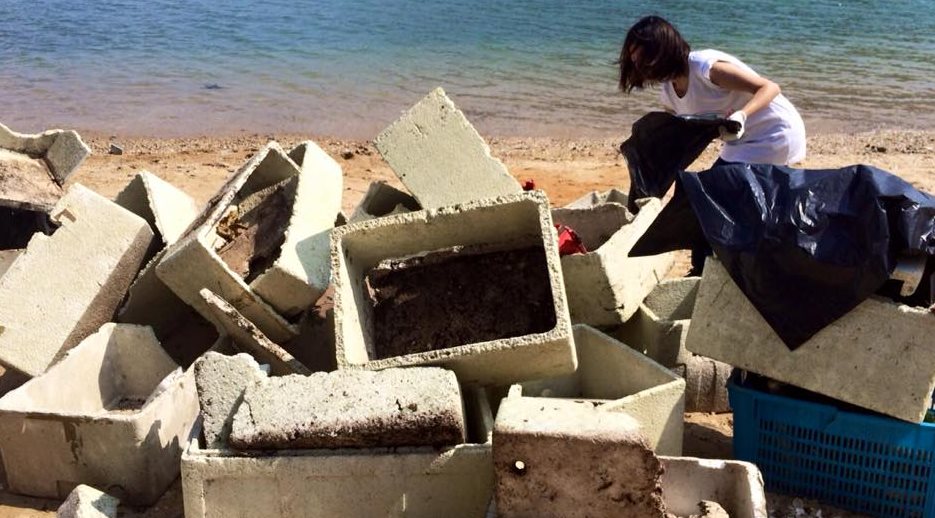 As well as fish and birds, recently green turtles, a protected species, have washed up on its beaches after dying from ingesting rubbish.

“They found a 50cm long string of trash in a turtle’s stomach which included nylon threads and plastic bags. Turtles often confuse floating plastic bags for one of their favorite food sources, jellyfish,” says Christensen, adding that humans too are at risk.

“It’s not just plastic bottles and pieces of Styrofoam that are threatening our marine wildlife, tiny micro plastics contained in our toiletries, cosmetics and washing detergents are having hugely detrimental effects and making their way into our food chain.”

Canada and the US have moved to ban microbeads in personal care items due to environmental concerns.

A spokeswoman for the EPD said its marine data for Hong Kong showed “levels of toxic substances did not exceed” international standards, but local campaign group Plastic Free Seas warns action is needed now to avoid toxins building up.

Overall, Wilson remains hopeful attitudes are shifting: “I believe there will be a time when overusing plastics and packaging will be seen in the same way smoking inside is now.”