Four miners who had been trapped underground for 36 days in a collapsed Chinese gypsum mine have been rescued, state media reported Friday.

The operation to save the men trapped more than 200 metres underground took two hours as each was hauled up to the surface one by one, according to state broadcaster CCTV.

Dramatic footage released by CCTV showed rescue crews applauding as the men were brought to the surface in Shandong province, in eastern China, one by one on a narrow capsule. The men were shown being wrapped in military blankets, and put in ambulances.

The four were among 29 trapped when the mine collapsed on December 25. Of the 29 miners, 11 were rescued the following day and one was pronounced dead while 13 remained unaccounted for following the rescue, CCTV said.

Rescuers managed to contact the miners on January 8, the broadcaster reported, and sent down food, clothes and lamps through a tunnel.

However, complicated geological conditions made the rescue difficult with crews having to face structural instability of the tunnel and falling rocks.

The incident was the latest deadly accident in a country where safety rules are often flouted to cut costs.

The mine owner drowned himself at the scene soon after the collapse while he was helping in rescue efforts, Xinhua reported previously.

The cause of the collapse is under investigation, but industrial safety regulations are often flouted in China and corruption enables bosses to pursue profits at the cost of worker safety.

Video: The first of the four #miners is rescued after 36 days trapped underground pic.twitter.com/Mvqtd3tasS

Four officials in Pingyi, where the mine is located, including the county’s party chief and head of government, were removed from their posts in the wake of the accident.

The gypsum pit and other mines in its vicinity were ordered to stop production in October by local authorities because of a risk of sinkholes, but it kept operating secretly, the Beijing Times reported earlier. 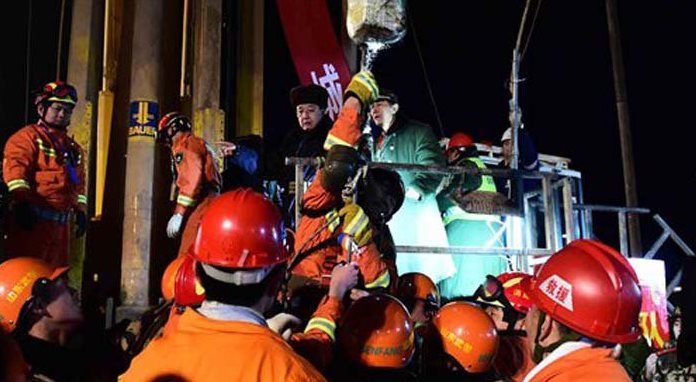 Accidents linked to lax industrial safety enforcement have seen hundreds of people killed in China this year, including this month’s landslide in the southern commercial hub of Shenzhen and chemical blasts in the industrial city of Tianjin in August.

The government says the number of fatalities is declining, but some rights groups argue the actual figures are significantly higher due to under-reporting.