A photo showing Carrie Lam, the chief secretary of Hong Kong, standing on the nose of a Chinese white dolphin painted on the ground at Taipo Coastal Park has gone viral in the past few days — for all the wrong reasons.

For netizens, the snapshot captures authorities’ destructive attitude toward the marine mammal, which has flirted with extinction due to a series of government-led infrastructure projects that involve large-scale land reclamation. The photo was first uploaded to the the Hong Kong government’s Facebook page on January 10, 2016. As the government is set to go ahead with the construction of a third airport runway located in the heart of the Chinese white dolphins’ habitat, Carrie Lam’s pose was interpreted as her taking a “step” to “kill” the iconic animal.

Below are some of the most popular comments on the government’s Facebook page:

The Chinese white dolphins have been killed by your construction projects, how dare you make use of them for your propaganda?

They have forced the dolphins into extinction. Then they painted some fake dolphins and pretended to be excited at the seashore where there are no more dolphins. So hypocritical, so banal. People can be fearless when they are shameless.

You don’t want the real one and kill them all. Then you step on the fake one and take a photo while laughing. What kind of mentality is this?

The Chinese dolphin was used as a mascot during the handover of Hong Kong to China [in 1997]. Now when you go to Tung Chung, there are many ads making use of the white dolphins. I feel sad just by looking at the posters. People don’t care about their right to survive, but keep using them for promotion, they keep exploiting them. Now the white dolphin is turned into a painting on the ground, and the shameless government officials are stepping on their noses. What does that mean?

The Chinese white dolphin has inhabited the area near the Pearl River Estuary since the 1600s. It is listed as a “Grade 1 National Key Protected Species” in mainland China and is protected under the Wild Animals Protection Ordinance and Protection of Endangered Species of Animals and Plant Ordinance in Hong Kong.

However, the population has steadily fallen since the mid-1990s because of land reclamation, water pollution and heavy marine traffic. The IUCN Red List of Threatened Species lists the dolphin as “near threatened.”

According to Hong Kong Dolphin Conservation Society, only 61 dolphins appeared off Hong Kong’s shores in 2014, while in 2003 the count was about 158. The decrease was believed to be related to the construction of the 42-kilometer-long Hong Kong-Zhuhai-Macau Bridge. 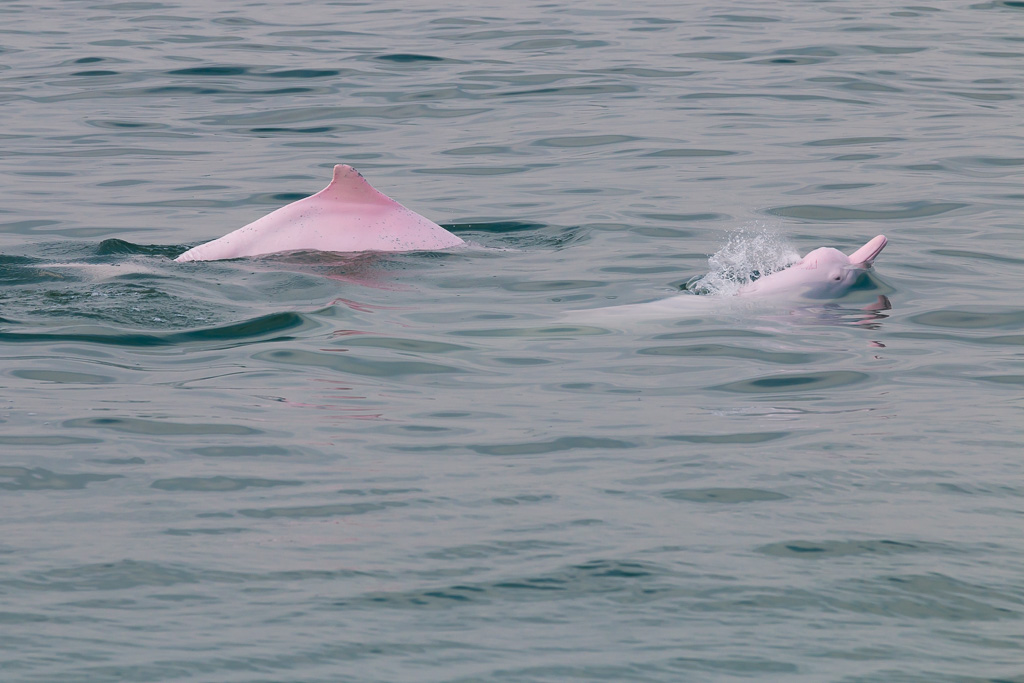 If the Hong Kong international airport’s third runway construction project is approved, the white dolphins could find that their already shrinking habitat is made even smaller. Another environmental watchdog, the Hong Kong World Wild Fund,pointed out in its environmental impact report:

“Over the past 20 years, at least 2,000 hectares of dolphin habitat in Hong Kong alone has been damaged or destroyed through dredging, dumping and reclamation works. The construction associated with the third runway will reclaim 650 hectares of the sea. During the construction phase an additional 981 hectares will also be heavily impacted.”

The location of the proposed third runway is at the heart of three Chinese white dolphin hotspots […] A new runway would firstly create a physical barrier in the water, disrupting dolphin activities and movement between these important habitats.

Regardless of all the environmental concerns, the government’s airport authority is determined to build the multi-billion-dollar third runway, claiming that the construction project is the only way to maintain the city’s competitiveness in the Pearl River region, even though the Hong Kong airspace is already too crowded and there is not yet any agreement made on the regional air traffic management that gives more airspace to the city.

The step that the Hong Kong government takes may not only end up killing the Chinese white dolphins, but public trust as well.