In a study published earlier this year, China Media Project director Qian Gang found that Chinese leader Xi Jinping had a much higher profile in the People’s Daily, the flagship newspaper of the Chinese Communist Party, than any of his predecessors going back to Mao Zedong and Hua Guofeng. Isolating the first year and a half of the terms of leaders past, Qian Gang found that mentions of Xi Jinping in pages one through eight of the People’s Daily were more than double figures for Jiang Zemin and Hu Jintao. 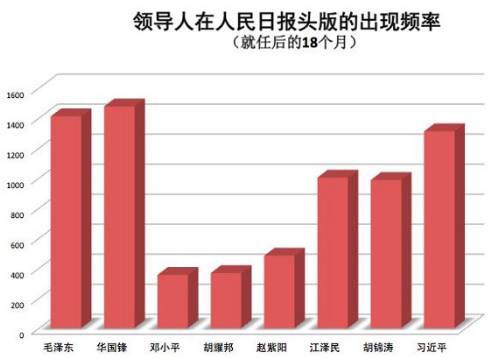 When isolating front-page coverage, Xi Jinping’s frequency in the flagship newspaper remained more than 20 percent greater than Jiang and Hu both. The graph to the right, “Leader Frequency on the Front Page of the People’s Daily,” shows Qian Gang’s results for each 18-month period of leadership, with top leaders listed left to right beginning with Mao Zedong and ending with Xi Jinping.

There are a many other examples, outside the pages of the People’s Daily, showing how Xi Jinping has been elevated on all propaganda fronts. In the latest edition of Southern Weekly, once the standard bearer of a more freewheeling style of professional journalism in China, praise for the glorious leadership of Xi Jinping is marquee coverage. Read the Southern Weekly piece, which runs more than 10,000 words, and weep: Oh, how far the mighty have fallen into the pit of positivity! 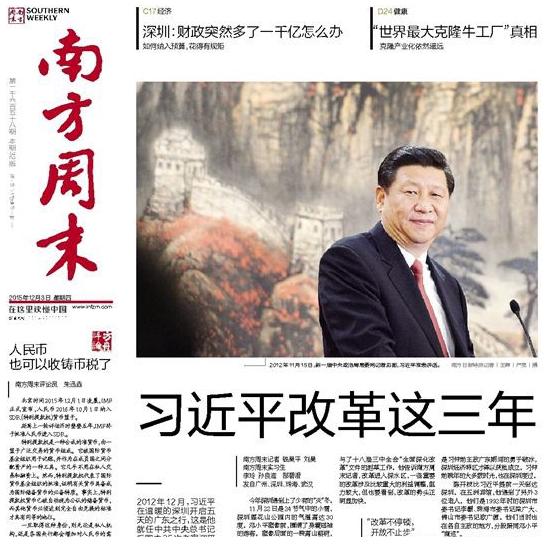 A 13,000-word paean to the reform leadership of President Xi Jinping is the cover story in Southern Weekly this week, with the headline: “Three Years of Reform Under Xi Jinping.”

The propaganda is also more interactive than ever before. But don’t take my word for it. Scan the QR code below and begin your first Xi Jinping knowledge quiz.

How do you stack up against the 200+ thousand others who have so far run the gauntlet of ten questions like the following: “When he led the 15th collective study session of the Politburo, Xi Jinping said we must learn to correctly use the ‘invisible hand’ and ‘visible hand’ in order to properly drive _______ ?” 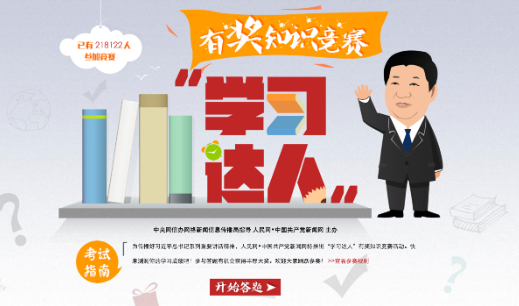 If you have kept your eyes trained faithfully on the headlines, the answer should come naturally enough: The relationship between the government and the market. For thus spoke the toweringly wise (and yet, so cartoonishly approachable) President Xi.

But topping the many, many recent examples of Xi Jinping’s growing profile in China’s media is today’s edition of the People’s Daily, in which Xi Jinping’s name appears in all but one of the twelve headlines (and makes it into the subhead of the last). 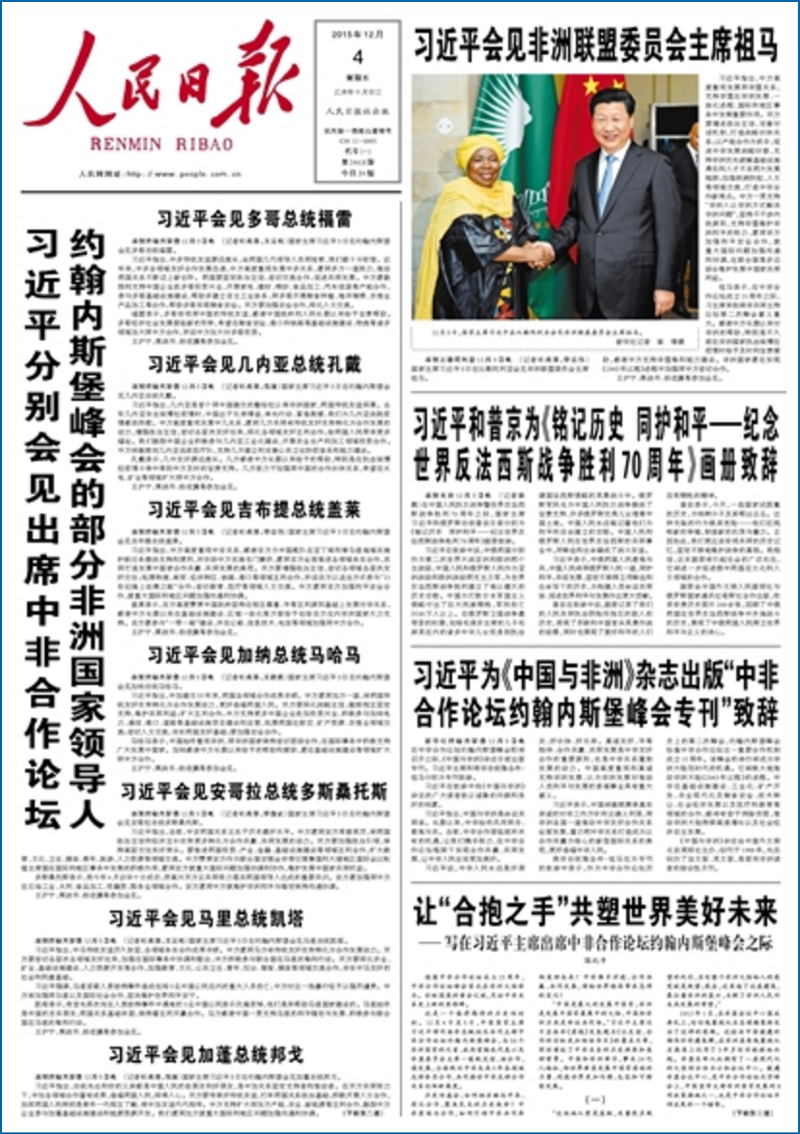 The parade continues on page two of the newspaper, on which Xi’s name begins each and every headline — and the entire page is a photo gallery of the president meeting with various African leaders: 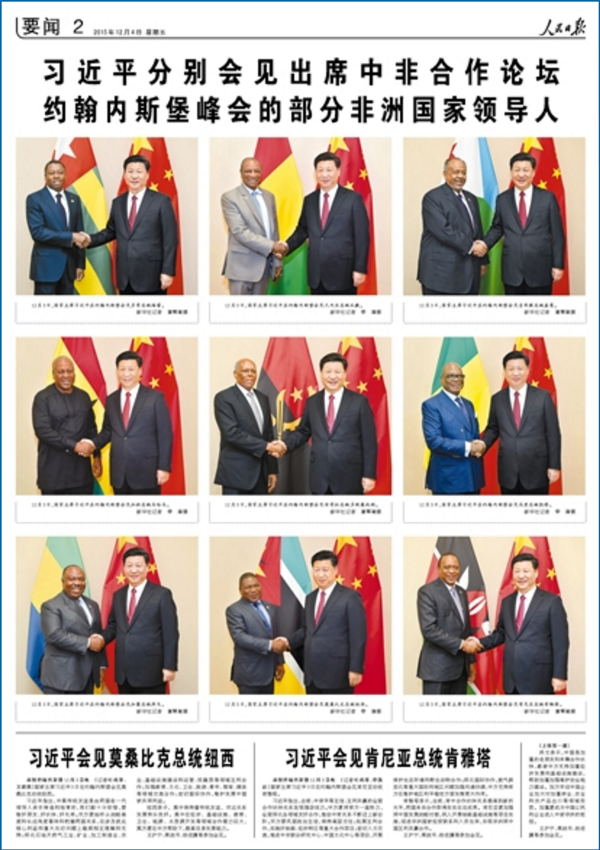 African Summit content from the front page then spills over to page 3 of the newspaper, occupying the bottom half. At the top of the page, there are three more headlined pieces, of which two are about — you guessed it — Xi Jinping.

HEADLINE: “Book Exhibition Themed on Xi Jinping’s The Governance of China and Other Works Opens in South Africa”

The third headline on the page is for a separate piece on poverty relief written by a professor from Singapore. Mercifully, it does not mention Xi Jinping.

From that point on, the flagship newspaper of the Chinese Communist Party gives us a rest from the parade of Xi Jinping headlines. Pages four and five move on to other Party business. We see for the first time on page four themention in a headline of Premier Li Keqiang (李克强). Right next to that article is a headline mention of Zhang Dejiang (张德江), another member of the powerful Standing Committee of the Politburo.

It is too early, perhaps, to formally call Xi Jinping’s personality cult. But it is a perfect time to review Clause 6 of Chapter II of the Constitution of the Chinese Communist Party:

Marquee Xi: The man in the headlines