When the Chinese president and African leaders meet this week to bolster economic ties, the elephant in the room will be the trade in ivory — and conservationists want the issue on the table.

China is the major consumer of illegal elephant ivory, and demand for tusks is threatening Africa’s elephant populations with extinction. Chinese President Xi Jinping and leaders from around 50 African countries open two days of talks in Johannesburg on Friday at the Forum on China-Africa Cooperation.

Discussions will centre around industrialisation and development and are expected to culminate in major deals on infrastructure and agriculture.

“You cannot discuss development without talking about the natural resources and primarily wildlife,” said Philip Muruthi, of the African Wildlife Foundation, adding that China consumes three-quarters of the ivory poached in Africa.

“Africa and China hold the keys to the future of elephants,” he told AFP. 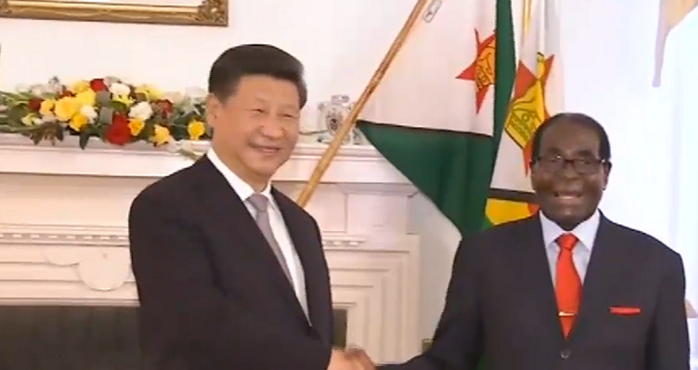 International wildlife conservation group WWF urged the meeting to “incorporate clear goals” in its final declaration as well as an action plan to push for sustainable use and trade of natural resources.

Between 20,000 and 40,000 elephants are slaughtered in Africa each year, fuelled mainly by demand from Asia.

“In the four years up to 2014, the wholesale price of raw ivory in China tripled, reaching a per kilo dollar price of $2,100,” according to the conservation group Save the Elephants.

“Without China’s leadership in ending demand for ivory, Africa’s elephants could disappear from the wild within a generation,” warned the group’s founder, Iain Douglas-Hamilton.

China’s ballooning middle class has created a population of wealthy shoppers with a penchant for ivory trinkets, or “white gold”, as a sign of financial success. “This hobby of ivory craving should be changed because it drives the African elephants to the brink of extinction,” said Fei Zhou, director of China’s branch of the global NGO Traffic.

Change in China?
Chinese film star Wang Baoqiang and Tanzanian musician Alikiba are leading the push to have the Johannesburg summit incorporate wildlife conservation into their talks.

“Look at the efforts that China has done to recover the giant pandas, the rules are very stringent,” said Muruthi. “We will not be preaching to people who do not know what the rules are”.

The Chinese government has supported efforts to protect elephants in Africa, having granting $10 million in 2014 to fund vehicles for game rangers and other protection measures.

The country also imposes severe penalties on ivory traffickers, with an average sentence of 15 years in prison, Fei told AFP.

One problem, experts say, is the coexistence of legal and illegal trade in ivory in China.

The international trade in ivory has been banned since 1989, but China was authorised in 2008 to import 62 tonnes of ivory from Africa in an attempt to dry up the black market.

The legal ivory objects are supposed to have an authentication certificate, but “most vendors ignore the regulations,” says Zhou.

“Legal trade serves as a cover for illegal trade.” Ivory trade in East Africa during the 1880s and 1890s. Photo: Wikicommons.

One proposal is to ban all ivory trade in China, with Zhou citing the example of tiger bones.

“In 1993, the government banned their marketing and demand plummeted,” he said.

In September, President Xi pledged “to take significant and timely steps to halt the domestic commercial trade of ivory”, a move described by conservationists as “historic”.

There are about 470,000 elephants left in Africa, compared to 20 million in the early 20th century.