A Hong Kong ivory shop owner who was targeted in a conservation protest last month has denied wrongdoing after he was secretly filmed discussing the export of ivory in a clip obtained by HKFP.

Joe Lee, owner of Antiques & Collectibles in Sheung Wan, was photographed in a standoff with ivory protesters who came to his shop holding pictures of dead elephants two weeks ago.

‘We are not bad people’
In a separate incident this week, a secretly filmed video obtained by HKFP shows Lee implying to an undercover activist posing as a customer that he can help to take small ivory pieces across the border into mainland China.

“Most people will just buy it from me, then smuggle it back into China,” Lee says in the video without mentioning the word “ivory.”

When the customer asks how he can transport ivory products out of Hong Kong, Lee says he can ask others to help take them to Shenzhen first. “In Shenzhen we can use SF Express.” Sun is confronted by demonstrators during a protest in November. Photo: Todd R. Darling/Polaris Images.

After seeing the video, Lee told HKFP that he was just trying to make a sale. “You have a customer come inside your shop, you also want the customer to buy… I need to eat rice. We are not bad people.”

When asked if he intended to help export ivory, he said: “No, never, never never… [I] just tried to make business only.”

Lee said he has a stock of three to four tonnes, which are more than three decades old and have all been certified by the government. “This business is coming from my father, they have [a] licence… All the stock is old stock.” 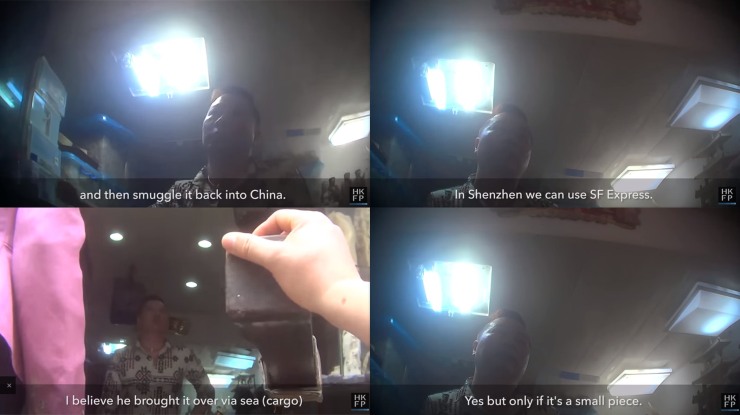 Lee’s case underlines the confusing legal state of the ivory trade in Hong Kong, where ivory stocks older than 26 years can still be traded if they have been licensed by authorities. However, taking ivory out of Hong Kong is considered risky if the ivory is not old enough or properly licensed.

Grey area
The Hong Kong government told HKFP that it is an offence to re-export any ivory out of the city except for stock which was held in Hong Kong before the international trade of ivory was banned in 1989 under the Convention on International Trade in Endangered Species (CITES).

“The import, re-export and trade in pre-Convention ivory are allowed under the CITES when the specimen is accompanied by a pre-Convention certificate,” The Agriculture, Fisheries and Conservation Department (AFCD) said.

The Society for the Prevention of Cruelty to Animals (SPCA) said the problem with Hong Kong’s current legislation is that it allows domestic trade of ivory within the SAR territory, yet there is no clear definition of what constitutes domestic trade. “Logically if you sell to someone from overseas or the mainland they are likely to want to take it out of Hong Kong,” Sandra Wong, SPCA’s Hong Kong spokesperson, said. A poster and licence displayed in Lee’s store. Photo: HKFP.

Conservation groups and lawmakers have been calling for the total ban of the trade in ivory, which are taken from tusks of elephants and other animals. Hong Kong is the largest elephant ivory retail market in the world. It has been criticised for fueling the slaughter of African elephants to meet the demand of customers, most of whom come from mainland China.

Legco debate
This week, the Legislative Council is set to discuss a motion to tighten the crackdown on the smuggling of wildlife products including ivory. Legislator Elizabeth Quat, who tabled the motion, is calling upon the government to further restrict the trade in ivory with a goal to ultimately ban domestic trade.

The AFCD says it has been working closely with the Customs and Excise Department to combat the smuggling of ivory. “In addition to routine inspection at border control points, sniffer dogs trained to detect ivory have been deployed at import control points to assist screening of passengers and parcels. Such operations have also been extended to screen passengers departing Hong Kong to tackle possible illegal export activities of ivory. ”

Lee insists he is doing honest business and that conservationists are being unreasonable. “Sometimes they are not fair. Even last Saturday, they had many people coming – in your situation, would you be happy?”

“If the Hong Kong government say ‘stop the business’, [I will] just close.”