Chinese artist Ai Weiwei will set up a network of collection points to receive Lego block donations, he said Monday, after he set off a social media storm by accusing the Danish company of refusing a bulk order on political grounds.

The children’s toy became embroiled in controversy when Ai — who used the bricks to create portraits of political activists from around the world for a US exhibition last year — said the firm had told him it would not sell directly to users with “political” intentions. Chinese artist Ai Weiwei poses for photographers with his work “Tree” during a press preview at the Royal Academy in London on September 15, 2015. Photo: AFP/Leon Neal.

Ai is China’s most prominent contemporary artist, who helped design the Bird’s Nest stadium for the Beijing Olympics and his work has been exhibited worldwide, but he has also run afoul of Communist authorities.

Fans offered online to give him their Lego blocks, and a post on his Instagram account said Monday: “Ai Weiwei has now decided to make a new work to defend freedom of speech and ‘political art’.

His Instagram account also shows a picture of Lego bricks in a toilet bowl with the caption “Everything is awesome” — the tagline of the Lego movie.

One supporter posting on Twitter told the manufacturer: “Your execs need to go watch the @TheLEGOMovie and think about what they’ve done.”

In a statement to Britain’s Guardian newspaper, Denmark-based Lego said: “As a company dedicated to delivering great creative play experiences to children, we refrain – on a global level – from actively engaging in or endorsing the use of Lego bricks in projects or contexts of a political agenda. This principle is not new.” 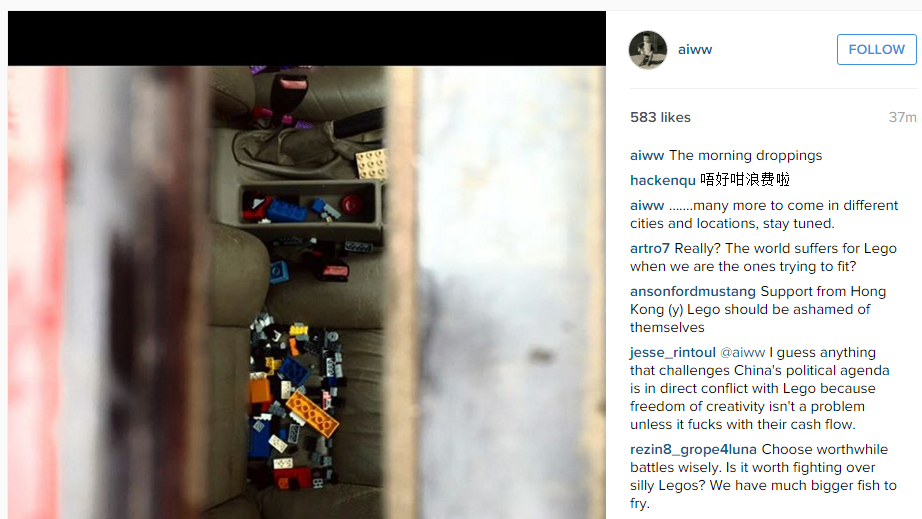 Ai has been targeted by authorities for his advocacy of democracy and human rights as well as other criticisms, including the aftermath of the deadly Sichuan earthquake in 2008.

He was detained for 81 days in 2011 and subsequently placed under house arrest, with his passport taken away. The document was only returned in July this year, enabling him to travel to Europe.

An op-ed in the Chinese edition of the Global Times newspaper, affiliated with the Communist Party mouthpiece People’s Daily, praised Lego for “refusing to be implicated in a political statement” and being motivated by “good business sense”.