Residents in a small coastal city in China have clashed with local authorities over the construction of a pier during protests over the past four days. Injuries have been reported on both sides, according to a government statement and pictures posted on social media. 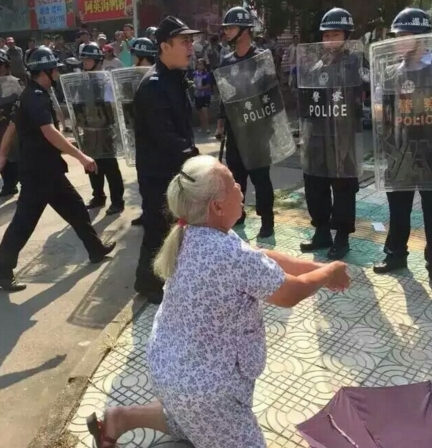 Violent clashes occurred at demonstrations on Thursday, Friday and Saturday in Beihai, Guangxi province in southwestern China. Protesters, many of them middle-aged and elderly people, demanded the government stop building a pier on a local beach, which they said was the “last public beach” on their once-beautiful and natural shoreline.

On Sunday, the government issued a statement saying that 62 people had been arrested and 16 remain in custody. In the statement, the government said protesters had attacked workers at the pier construction site and injured “multiple law enforcement officers” on Thursday. It also said about 50 “elderly women and onlookers” blocked the entrance to a police station on the same day but were later “persuaded to leave” and no conflicts occurred. A protester was injured in clashes on Thursday. Photo; Weibo.

But pictures posted on the Twitter-like Weibo platform showed that some protesters were badly injured while others were taken away by medics at the sit-in in front of the police station. Residents also hit back at government claims that they were violent. Many on Weibo accused the government of defaming protesters, using tear gas and police dogs on old people and blocking their messages on the internet. A woman being taken away by medics after a protest. Photo: Weibo.

In a widely shared article, a local resident said the government had already built “many” piers and sold them to private companies. The piers seriously affected the livelihood of local fishermen and residents were unhappy about the way the government spent the money earned from selling the piers, the article said. The elderly people were defending their home and their “last piece of beautiful beach”, it said.