China has pledged to improve benefits for army veterans, following widespread protests by former soldiers over unpaid pensions and a pledge to slash troop numbers by a further 300,000.

China has laid off more than a million troops since the 1980s, but still has the world’s largest standing army of more than two million people.

The central government will fund a “basic pension allowance,” the official Xinhua news agency cited officials as saying on Thursday.

Tens of thousands of army veterans have staged protests in recent years against local officials who they accuse of denying them benefits.

Veteran protests are one of the biggest threats to social stability in the country, Xue Gangling, dean of the China University of Politics and Law, told Chinese media outlet Caixin in 2013.

This week’s report did not go into details about the pension scheme, which comes a month after President Xi Jinping announced a new 300,000 troop reduction. 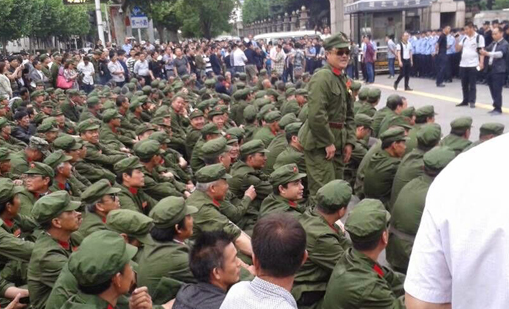 It was the latest in a series of giant cuts to the bloated People’s Liberation Army as Beijing seeks to craft a more efficient fighting force.

Many laid-off soldiers, with little formal education, have found it difficult to readjust to normal society and find jobs in the civilian economy.

Demonstrators, who have gathered outside government offices sometimes in army uniforms, have often been treated harshly by state security officers.

Most of those losing their jobs are thought to be in non-fighting roles, such as logistics and entertainment.

But the PLA Daily newspaper said last month that the difficulties of implementing the latest cuts were “unprecedented.”