In the last few days, amid memorial services for Occupy, the pummeling of a prospective pro-vice chancellor, the granting of theological status to the Chief Executive, the appointment of a government under-secretary on a salary higher than a US Assistant Secretary of State and a Hong Kong abandoned by tourists, my old school friend Simon came to visit. Simon has done awfully well. He is an English judge and he came with a group of other senior lawyers, to talk shop with local counterparts.

Of these curious crises crowning Simon’s visit, the tourism one has been worrying me most. I worry it might stop. The quality of life in First Class on MTR’s East Rail has risen blissfully since it started. Hopefully, it will probably continue because the huffers and puffers in charge of tourism won’t admit to themselves that Hong Kong has got boring. But I wanted to liven it up for Simon in the short time he was with me.

On the Mid Autumn Festival afternoon, I took him for a walk out of the upholstered dreamland of the Conrad towards Sheung Wan. It’s recommended online but I remembered, from being rash enough to do it once before, that it would need embroidering. I told Simon of how the whole of the old Victoria Barracks had been promised as a ‘green lung’ for the people of Wanchai. I told him how half the lung had been removed for Pacific Place, three hotels, the British consulate and the Supreme Court and how it did not matter anymore because ordinary people could no longer afford to live in Wanchai and those who did took Virgin Upper Class and picnicked in Hyde Park.

The people’s park was looking sweaty and provincial so I explained how couples attending the marriage registry could wed underwater and swim with dolphins and how special hunting nights are laid on in the aviary. Flagstaff House, shut up with its teapot collection and an air conditioning refuge for damp families, needed treatment. Simon was amazed to learn that, in winter, its shutters are flung open to the light and breezes it was built to catch, period furniture comes in and actors play the roles of generals and their ladies planning wars, bossing Gurkhas and being carried from room to room by coolies. On the way across to St John’s Cathedral, Simon asked how long the elevated walkways had been around. Since the earliest times of the colony, I said and this one over Cotton Tree Drive had been constructed in 1849, originally all in teak, with punkahs pulled to cool pedestrians. Mercifully, Anglicanism’s natural habitat is an earlier century so the Cathedral played its part without need of any supplement.

The ‘transcendence issue’ had fascinated the incredulous visiting lawyers so, passing Government House, I explained that Chinese culture and kung fu readily embraced people flying over objects. Had we not just celebrated a princess flying to the moon? All Chief Executives have flown; the first for lack of breath, too low and smack into public opinion, the second into the wrong people’s windows and this one direct to China. Up Staunton Street where the slope is steep, the sidewalks are narrow and the steps short and severe, the less than agile walk in the road to the surprise and outrage of the dumb, spoilt class of person who drives around those parts. I explained to my endangered judge that as Pamplona has its Running with Bulls, Hong Kong has its Fleeing from Punks in Porsches. I had no fantasies to spin about ‘PMQ’ as we walked by except to say that two of the flying Executives were brought up in it. ‘It’s meant to be for creative start- ups but there are quite a lot of shops and restaurants…..’ My explanation trailed away as does Hong Kong’s pursuit of excellence against the chance of a fast buck.

The Man Mo Temple was a symphony in scaffolding and gauze. Simon’s one observation was, “It’s so small!” I told him they were adding a floor to take an expanding congregation.  A note to Taoist and Buddhist operators. Westerners hear ‘temple’ and they think ‘church’ and then they think ‘big’ so expand, charge an entrance fee and rack up the tourist dollars. 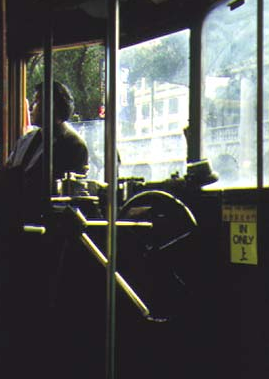 For Cat Street and the hushed walk through Sheung Wan to the tram terminus, I had to be really creative.  I explained to Simon that this had always been a packed area, historically the victim of contagious diseases. Current worries over outbreaks of bird flu, dengue and cosmetic surgery underlay the paucity of stalls, the shuttered shops and the empty streets. The tourism pooh bahs might think of ways of putting it out that to visit Hong Kong during a Chinese festival is to court depression.

Like the Cathedral, the tram back to Admiralty spoke for itself but not to me. It had been a long time since I had been slim enough to get on one and avoid genital assault from the turnstile. God, those things are slow. I toyed with the heresy that the consultant from nowhere who told the government to effectively tear up the guts of the system may have had a point.

Before he left the city, I arranged for Simon to visit the Nan Lian Garden in the depths of Diamond Hill and maybe walk on to the Flower Market afterwards. I told him, ‘In doing so you will be walking through the immanent Hong Kong; neighbourhoods where live some of the 190,000 households of working families totaling  640,000 people who are below the poverty line- an increase of 10% over five years and 9% of the total population. It’s very well hidden.’

Simon looked doubtful. ‘Your Honour,” I said, “ this last bit is under oath. There are actually over 1.3 million below the line. It’s a lot to transcend. Come again soon.’

Taking a tourist on the trail to transcendence