When discussing the concept of identity, one of the most important distinctions to make is whether or not this identity is chosen.

Whether or not we feel we have a choice fundamentally alters both our understanding and our relationship with our Hong Kong identity. Is it an external identity, a construct separate from our own person that provides the framework? Or is it an idea that is itself foundational to our own sense of who we are on which our own personal identity is construed? In other words: is our Hong Kong identity from an external reference, or does it come from searching within ourselves?

When I interview people on this subject, in almost all cases they are not aware of this distinction. There are however a few markers that I have come to recognise. I often ask people to describe when they first became aware of their Hong Kong identity. It is not just when, but also how they describe their first experience of making a conscious identification that is interesting. Answers fall broadly into two categories: those who point to a personal and transformative moment when “Hong Kong began to feel like home,” and those who experience a realisation that they are not alone, who find meaning in an identification evolved from a shared experience.

When people talk of “realising how much I like this city” and of “deciding to stay,” Hong Kong is understood externally from who they are. Their personal identity exists separately, and is not inherently tied to the choice. This Hong Kong identity is engaged and understood not from within ourselves, but from projecting who we are already outwards. There is also an underlining presumption that there is an alternative. Hong Kong is understood comparatively. To decide to stay and call Hong Kong home, suggests that there is a choice.

As a choice this identity is then rationalised. Thus, we often hear of the city being “safe” and “efficient,” or of the “great food.” This is identity as fashion, something outside of us that we select as we feel it, to best represent us at a moment in our lives. It is pleasing to our eye, comfortable on our skin, at tune with our values. But for it to be pleasing to our eye is quite different than for it to have shaped how we see. 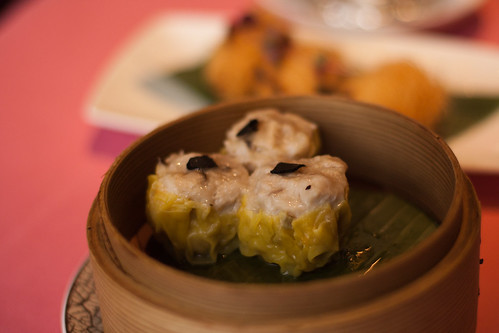 “…we often hear of the city being “safe” and “efficient,” or of the “great food.” Photo: TomEats.

For others a Hong Kong identity is not what fits their existing self, but what is. For such people it is not a choice but an acknowledgement. It is also often, though not always, a reactionary position: an identity realised as much in reaction for what it is not than from a sense of solidarity with what it is.

For many Hong Kong is not the context in which they have found a home, but the only context they have known. Without choice, it is Hong Kong that alone defines their concept of home. As such they are often blind to much that others may find either particularly attractive or repulsive about living here. The trains are not efficient, the summers are not that hot and the streets are not too crowded because this is how they are. When a comparison is made, it is within the context of Hong Kong. Thus a summer day may be hot and the streets of Causeway Bay might be crowded, not because this is Hong Kong, but because Hong Kong is (or was) not usually so hot nor so crowded.

Without an external comparative framework, such Hong Kong people tend to make fewer generalisations of Hong Kong. They talk less of “Hong Kong food” as of specific types of cuisine found in Hong Kong; and when passing judgement the context remains local – it is specific dishes at a specific place serving a specific cuisine that is good. Thus, even if the talk is of Hong Kong food being good, what is referenced isn’t that the food in Hong Kong is necessarily “better” than elsewhere, but that only in Hong Kong can one get a certain (local) dish of a certain quality that has a meaning and value that is particular to the people of this city.

Those who identify in this way commonly describe their sense of belonging to Hong Kong as a “feeling” rather than reasoned calculation. The word “family” is often used when describing this relationship. If those who choose their identity often describe a moment when they “fell in love” with Hong Kong, many without a choice describe instead a moment when they first became conscious of the importance of their sense of home.

It is a “love” for that is familial in nature that need not be reasoned. It is a bond that exists regardless of action. Thus, whether they like Hong Kong, or show an interest in their home or openly care is irrelevant to this relationship. When they do act it is not to “make Hong Kong better” but to “preserve” the core of what already makes Hong Kong home. This distinction is apparent in the various forms of activism that exist within the city. Contrary to popular belief in both sides of the political spectrum, I do not believe that the recent protest movements has given birth to a new Hong Kong identity. What it has done is amplify a feeling that was already there, and provide a sense of solidarity among many people who share a similar understanding as well as values and relationships with Hong Kong. For many younger people the protests were also the first opportunity for them to engage with issues that are of extreme importance to their sense of self – issues that had up until now been discouraged or ignored by the mundane cycles of daily life. In this way what was once a personal identification has become part of what they believe to be a distinct Hong Kong identity. To have a choice though is to lose this certainty of being a Hong Kong person. Needing to rationalise their choice, those with a chosen Hong Kong identity almost invariably view Hong Kong positively. This is especially true of those who have come to identify with Hong Kong since the 1980s, when this city became more a beacon of opportunity than a place of refuge, and to call Hong Kong home became an increasingly positive choice.

It is not that those who so identify with Hong Kong have neither the imagination nor the means to picture a home outside of Hong Kong. Many do, and in recent years many have looked longingly towards Taiwan. But they still look outwards from a perspective that is very much set by their identity as Hong Kong people. Like family, we still feel bonded to them, and realise that to sever this bond is to discard much that has shaped the person we are today.

To choose our identity and to be a Hong Kong person