The government has announced that the minimum wage for domestic workers will increase by 2.4 per cent, or HK$100, to HK$4,210 per month. Domestic workers groups had been campaigning for a HK$400 increase to HK$4,500.

For employers of domestic workers who opt to give their helpers a food stipend in lieu of free food, the allowance is set to go up by 3.2 per cent from HK$964 to HK$995 per month.

The increases – which are below inflation – will only apply to new contracts signed on, or after, October 1. 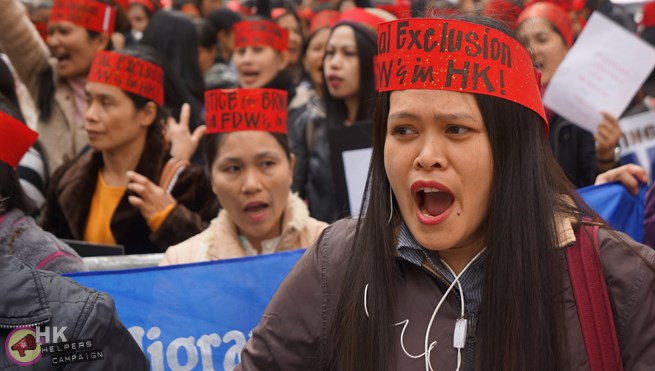 Eman Villanueva of the Asian Migrants’ Coordinating Body told HKFP: “The 2.4% increase is disappointing and is significantly less from what is due to migrant domestic workers. The demand for a HK$4,500 minimum allowable wage has been forwarded to the government for the past three years and is already long overdue. The decision of the government to only give a measly $100 pay hike only shows how low is their regard to the value of our work. The AMCB will continue to lobby and fight for a more substantial and meaningful increase.”

Chairperson of the Indonesian Migrant Workers’ Union, Sringatin, told HKFP: “The increase is disappointing and less than our long demand. They didn’t respect and didn’t appreciate the value of our work and our contribution to Hong Kong’s economy and society.”

In reference to the wage increase, a government spokesperson said that it had “taken into account Hong Kong’s future economic outlook in the near-term, as well as the need to strike a balance between affordability for employers on one hand and the livelihood of FDHs [Foreign Domestic Workers] on the other in reaching the decision.”