Zeman, who had not long ago given up his Canadian citizenship to be a Chinese national, spoke to HKFP about the future of Hong Kong, his views on the pro-democracy Occupy movement, and the relationship between China and Hong Kong. When Zeman first came to Hong Kong from Montreal, Canada at the age of 19, he says it was “like being on the moon because it was the other side of the world, no one really knew where Hong Kong was”.

“I just loved the energy – it had a low tax base, and Hong Kong is a place with little government interference. You had a dream at night and you can wake up the next day and make it happen – that’s something that really attracted me and brought me here.”

Zeman observes that China is a different place from when he first got here. He said that for the past 35 years, the lives of people in China improved drastically, and that the majority of people there are quite happy. He believes, however, that the “one country, two systems” concept has been misunderstood.

“I think [people do not understand that] we really are one country from both sides… The hardest thing for many Hong Kong people to adjusting to the fact is that there are two different cultures – the Chinese culture and the Hong Kong culture… It is one country and two systems, but with limitations.”

He admits that “one country, two systems” has led to many problems but believes that the two systems will become closer in time, as both sides grow to understand each other’s aspirations while maintaining an open mind.

In order to bridge the chasm between the two places, Zeman joined Tung Chee-hwa’s think tank, the Our Hong Kong Foundation, as one of its founding members.

“[The foundation] was set up during Occupy Central – Tung was at that time trying to do his best to bring people together and bring Hong Kong people closer to china… The Foundation is aiming to become more of a research think tank in different areas of how Hong Kong can go into the future, trying to break down the challenges, whether it is education, IT, commerce or culture.”

‘Too far and too long’
Zeman calls the pro-democracy Occupy movement last year a protester’s dream. “Occupy Central was the first time students were able to come out and get together [to] made a statement. People from all walks of life in Hong Kong joined in, anyone with a problem joined in, because it was a protester’s dream.” By that, he said, he meant that the movement was able to carry on for so long, that one could just go out to protest to make their point heard, and choose from different camps and options, from Central to Causeway Bay.

“I think it really made China realise the problems that do exist, especially for young people – the high property prices, the shortage of land, the different problems they face on a daily basis – that they need to be addressed. Especially when you’re at that age when you’re very idealistic – every generation has gone through it… It was again a misunderstanding between the older and younger generation, and the so-called establishment – so many students were crying out to be heard.” 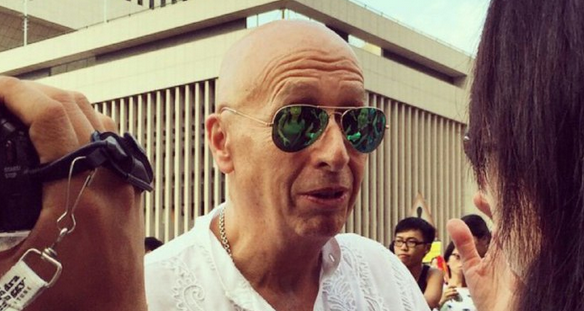 Zeman said that the protesters were making a good and peaceful statement unlike some countries’ social movements, but thinks that on the whole the movement did not do Hong Kong a favour. “It just, a bit, carried on too far and went on for too long. The professors had an idea that people joined in, and then they lost control, nobody had control. The problem you have with mob rule is that nobody controls the mob. And that’s exactly what happened – there were so many factions and groups and Occupy Central just lost its impetus. Originally it was just a short period of making a statement, and it would have been a lot more effective, than carrying it on for too long. It just kept going on without ending – and some students, some people, thought they could just move in here, and it was fun.”

He also said it had an effect on the economy. “Obviously Occupy Central was not a good thing for Hong Kong, especially for the commercial world. Number one, it caused a lot of hardship…the roads were blocked off, it caused a lot of problems getting home [and] getting to work in the morning, and in that respect it really inconvenienced a lot of local people. Second thing I didn’t like about it is that, while I respect the reasons, it brought Hong Kong into the world limelight in a negative way. Many media had a way to turn the story around to fit what they’re used to… They were expecting people to be fighting and they couldn’t believe how peaceful it was, but some reports coming out of here – they didn’t understand Hong Kong. “Somebody sitting in New York in business that wants to invest here or come here thinks this is totally unstable. This was not the case of what was really happening, and it gets portrayed in a way that was wrong, and in fact it hurts the whole economy, it hurts everyone, because if people stay away jobs will suffer and business will decline… And then of course they take young leaders who have their opinions and put them on the cover of TIME Magazine – it just makes Hong Kong look like we have revolutionaries here and that it was not a safe place to come, and people just go elsewhere.”

Press freedom
Zeman also dismisses the idea that press freedom has been declining in Hong Kong. “Don’t worry about press freedom,” he said, “It’s an invention by some media to say we’re being attacked [for] what we’ve been saying – so far everything that happens gets out there. No one’s ever said, you can’t publish that, most journalists are just paranoid when something happens. The attack on the editor [Kevin Lau Chun-to formerly of Ming Pao] who knows what that was from… to this day we haven’t really found out who did it or why, and [we haven’t really had proof], but it’s unfortunate – I don’t really like to see people get attacked.” The future of LKF
The suave businessman dubbed the Father of Lan Kwai Fong recently unveiled the new California Tower, which he believes will be the new heart of LKF. However, he is critical of the famous “Club 7-eleven.”

“What I really don’t like about 7-eleven is that they sell alcohol to high school kids – it just creates a really bad image. They don’t need an alcohol licence to sell liquor. You can’t drink on the premises, but you can go outside. It’s not good for the area,” he said. He also talked about the drug problem in LKF, which he said was not there until a year ago. “We complain to the police because it was just blatant – they just came right up to you, they were overstayers on their visas, from some African country.” It took a while for the police to act, but Zeman said that the situation was under control now.

Bright future
Despite the problems that the territory faces, Zeman thinks there is a bright future for the people of Hong Kong.

“For young people, Hong Kong is still a really great place – it has a low tax base, it’s international, it services the world, there are big opportunities… I encourage young people to go to China a lot, because Hong Kong is a small market, and people are able to do business and supply your idea to a much bigger place. Hong Kong is an international city that works with the world and I see a bright future for young people. I always tell them, if you have an idea, just do it, follow your dream, and don’t be afraid to fail.” And as a board member of the Hong Kong Tourism Commission, does he agree with Chief Executive Leung Chun-ying’s view that demonstrations against parallel traders are hurting Hong Kong’s tourism?

“People are hurting because the property prices are so high – the average person is trying to find a scapegoat, so they turned around and said it’s mainlanders that are causing me to wait five trains for the MTR… Parallel trading, the milk powder, and other things came up, and suddenly there was a backlash against the mainlanders.”

“It was a small group, but through social media it gets transcended very quickly to the mainland, who say you don’t want us… and because the Hong Kong dollar is tied to the US dollar, it’s getting expensive for the mainlanders.” Zeman believes that eventually tourism will recover, and that the growth will be much more sustainable.

Overall, he remains optimistic about the Hong Kong’s prospects: “It’s still one of the greatest cities in the world.”

Interview: Occupy was 'a protester's dream' but not good for Hong Kong - Allan Zeman