In 2012, I graduated in the inaugural HKDSE cohort, as one of the first batch of students to take Liberal Studies as a mandatory core subject. Since then, I’ve completed the undergraduate core curriculum at the University of Chicago, a pioneer of liberal education in the United States. Having been through both, I’ve thought more about how exactly Liberal Studies fell short and how we should construct this city’s social discourse. Liberal studies is a mandatory subject in the HKDSE, Hong Kong’s university admissions exam taken by people in Form 6 (Grade 12). Aside from a two-year project, 80% of your grade comes from your performance on a timed test, where you write short responses analyzing data, policies, and current news events across six modules – from personal development to energy issues. Here’s why the subject was misguided from the start, and even worse in practice.

A subject of parochial scope

“Teachers,” the EDB Curriculum Guide implores, “may consider starting with everyday events and personal experience to arouse student interest in enquiry.” But in my experience, even in an English medium-of-instruction school with a reputation for progressiveness and liberalism, lectures were so inadequate that they were irrelevant to our personal lives. 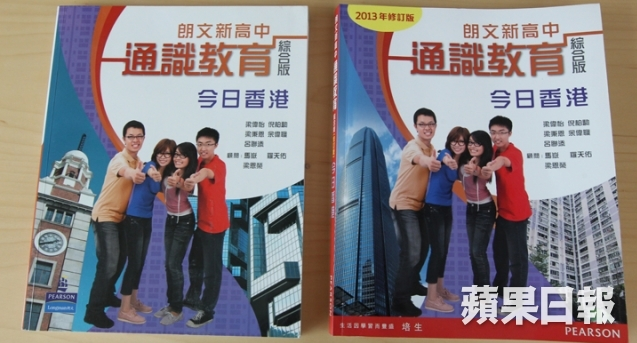 Our lectures on Personal Development, for example, omitted any mention of sexual identity aside from discussions about romantic partners holding hands in public. Issues about sexual orientation were greeted with ambiguous prejudice while, among teenagers, they circulated in private discussion. Transgender issues were never brought up, even if we were taught the “normal differences between the two sexes.” Barring any contentious issue, good responses meant speaking like a well-meaning but clueless social worker. Teenagers have issues with discipline; wouldn’t it be great if they did more community service?

This type of curricular myopia also casts clouds over the other sections. International issues were seldom raised, except under the umbrella trope of “globalisation.” Students are handed a stereotype of the “east” and “west,” which export “cultures” to produce economic profit and cultural resentment. Specific details of cultures aren’t covered, except for Hong Kong and China. Neither are important accounts of political, cultural, or colonial power – say Hobbes or Mill – studied.

Lacking support, cosmopolitan thinking is discouraged. The only examples of “Western cultural power” mentioned in 20 pages of the Curriculum Guide on “globalization” are Hollywood and American football. When in response to an essay question about how actively citizens should participate in protest movements, I brought up the example of American activist Malcolm X, our school’s instructor circled the “X” I had written, assuming Malcolm’s surname had slipped my mind.

The incoherence of power and conceptual positivism

When topics were relevant, they made for engaging lectures. These were the Modern China and Hong Kong Today sections. The tutors – many of them student protesters during the Tiananmen incident – fumed candidly about the complexities of Chinese statehood, history, and governance. These instructors fairly exposed both the banalities behind righteous rhetoric and the deceit behind brute power. But how do you test critical thinking about China?

The most common argument against liberal studies is that it is impossible for instructors, as politically minded citizens, to judge opinions objectively. “Take the ‘establishment’ opinion in your exams,” well-meaning mentors said, “because you will never be able to convince the examiner.” Yet examiners in other humanities subjects, from language to literature, have assessed students’ quantity of knowledge, quality of rhetoric, and matters of opinion without much backlash.

The most insidious problem about liberal studies is not the perspectives it espouses, but that it is unwilling to admit its agenda. This makes for an incoherent syllabus. In the US, high school civics teach the values of liberalism, democracy, and liberty through American history, alongside constitutional texts. But what really are Hong Kong’s values, and according to who? What are the texts that we should be reading? By failing to commit to an answer, the EDB has failed to give students a compass to navigate civic life, and hence fails to catalyze and assess their learning. 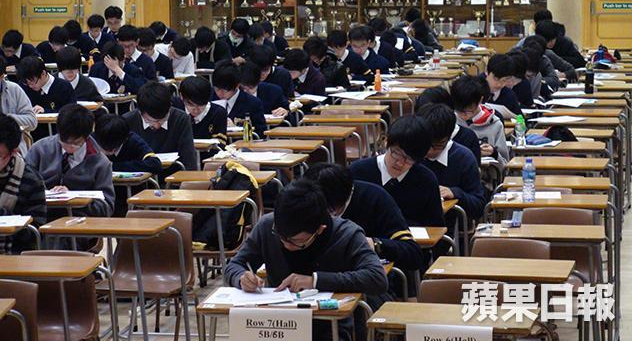 To remedy this, the EAA judges student responses on how accurately they define and deploy a set list of “key concepts” – like “justice,” “compromise,” “soft power” and “rule of law” – which often originate from European legal and enlightenment thought. But students aren’t exposed to the legal treatises the concepts come from, or given a rigorous treatment of their historical formulation. Instead of encouraging students to debate what they mean, the EAA assesses students on how well their definitions correspond to those of the graders.

In addition, Chinese power does not operate on law, values, or even capital, but through translucent guanxi (relationships). In Hong Kong, the Basic Law is regularly contradicted by its top officials; as a contemporary example, Beijing’s chief liaison officer Zhang Xiaoming stated that the chief executive enjoys a special legal position that puts him above the legislature and judiciary. This puts liberal studies students in a quandary where “key values” are expected of them in exams, but essentially ignored by those who matter.

Indeed, the best explanations for events in China would be dismissed as conspiracies in nations with more transparent political processes. Is Hu Jintao ill, and how does that affect the standing of the Shanghai faction? What does this omission of a detail from this press release from Xinhua, or this event from this military ritual, mean? Why was this selective application of the law overturned overnight?

In short, students are given a choice. If you were the cynical sort, you could try to convey these trickles of trivia leaking out from behind the iron wall, explanations which markers are likely to dismiss as “insufficiently clear.”

Or you could answer with the vocabulary and methods already mandated by the examination authority, inferred from the marking schemes they’ve provided as reference. In an official briefing of PP2014 Paper 1, a sample student wrote that China will rise peacefully because Premier Wen Jiabao said so “in a speech at the University of Harvard.” The grader awarded full marks to this “proper use of example.”

The exam becomes not a study of critical thinking or political processes, but a game to find out what the markers are looking for. Knowing this, test-setters sometimes rely on toothless issues like the smoking ban (PP2012) where public consensus has already been firmly established.

A Costly Failure of Assessment

So our students lack self-awareness, receive scant international exposure, and are disturbingly inducted into the ranks of impotent salarymen. But isn’t that what we were asking for?

This focus is rooted in the origins of liberal studies. Different groups are free to hold different ideas of what liberal studies is, the EDB claims, but today’s students have to expand their knowledge base, adaptability, and independent thinking to “face an ever-changing society and a knowledge-based economy.” This pegs student self-worth to their earning potential; it wants students to think enough to hold a job, but not much more than that.

Education in Hong Kong has never set out to instill a love of knowledge, or to make students explore their innermost selves, but to separate strong academic performers from the weak to allocate them fairly to competitive degrees – its sincere ruthlessness is charming.

However, almost a decade since its formulation, the EAA has not been able to establish what ability Liberal Studies is assessing, beyond test-taking and project management skills. Still it occupies 250 hours of lesson time, along with 7 out of 35 points in the 4C+1X ranking system for undergraduate applicant selection. This is too high; the Theory of Knowledge (ToK) course in the International Baccalaureate (IB), which covers some similar ground, occupies 3 points out of 45.

Thus, HKDSE students are also disadvantaged in undergraduate admissions to elite universities and degree programs at home and abroad. Students in foreign boarding schools, alongside those with non-JUPAS qualifications like GCEs and IB diplomas, routinely squeeze out local NSS students of higher academic calibre when they apply for degree places.

From Key Concepts to Critical Thinking

NSS Liberal Studies was entirely different from the liberal education offered at the University of Chicago. In one course sequence I took, Classics of Social and Political Thought, we charted a genealogy of thinkers from Plato to Arendt through expertly directed, heated discussions which merged theoretical concerns with present political issues. Instead of identifying quotes and examples – say, Plato’s “allegory of the cave” – we wrote essays to argue, with line references, what a thinker really thought about an issue like consent of the citizenry, and if another philosopher would agree. In doing so, we thought.

I have no illusions that there is enough political will, or even human capital, to overhaul liberal studies in the right direction. One thing we can do is to establish a set of core texts. To become educated thinkers, citizens must be able to read and understand what writers really mean. Instead of asking students to tell Hong Kong’s fortunes, we could ask them to argue what a thinker really says about democratic organization. We could train teachers to mentor students in the same way we should train students: through active and enabling discussion. This, at least, would make for concrete assessments of cultural knowledge and “critical thinking skills.” 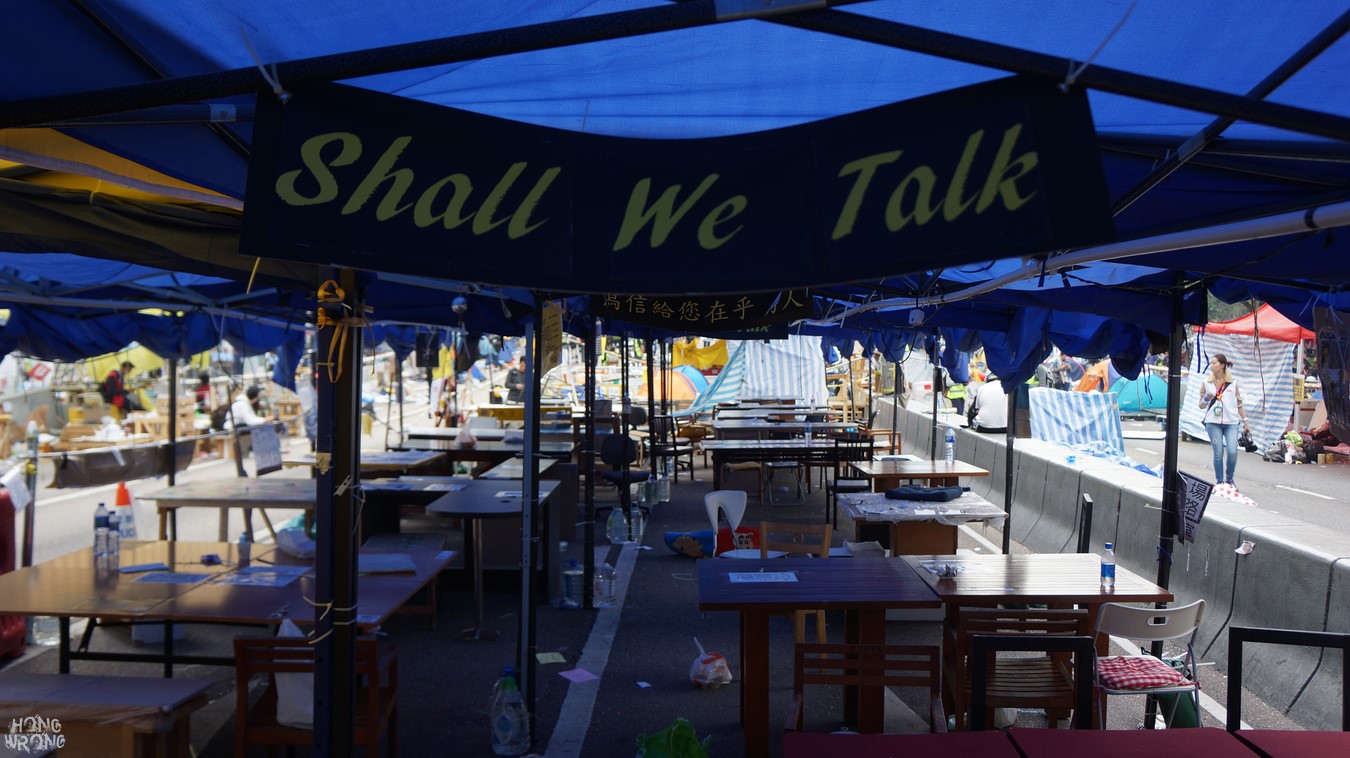 The Umbrella Movement study centre moments before it was dismantled, December 2014. Photo: HKFP.

But liberal studies isn’t, strictly speaking, a curriculum. A critical discourse is formed when people in a state think and collaborate freely on issues of personal and political meaning, finding areas of difference and common ground. During the Umbrella Movement, we saw an impassioned young citizenry that proudly displayed opinions that the state could not suppress. We saw – through the articles, ad-hoc libraries, poetry, Facebook posts, sit-ins and teach-ins – a citizenry with the capacity and zeal to understand who they really are.

It’s not as if Hong Kong’s young people can’t, or don’t want to, think for themselves. The state should realize that.

Wing Kui Brian Ng is a student at the University of Chicago, where he co-directed a public symposium on the Umbrella Movement with Regina Ip, Alan Leong, and American academics. His writing has appeared on Cha: An Asian Literary Journal, Business Insider, the Chicago Maroon, and the South China Morning Post. A Hong Kong native, he's interested in poetry, economics, aesthetics, software development, and food.

I took the Liberal Studies HKDSE exam; here’s why it’s a waste of time