The boys and girls at the Chinese Association of Hong Kong and Macau Studies don’t burn the midnight oil much. They like to be up bright and early with the broad accusation, the sweeping generalization and the overarching condemnation, all of which takes a lot of energy. So when Chen Zou’er, its chairman, comes to give one of his speeches on Hong Kong, as he did on Saturday, with wave after wave of criticism of our sins rolling in off the top of his head and crashing onto the rocks of Communist Party certainty, then you are compelled to listen and know that he must be right. ‘De- colonization has not been implemented in accordance with the law’, he claimed. Now, I did not know there had been a programme of de-colonization with laws to cover it. I suspect that when Chen’s back was turned for a year or two, the colonialists and their agents hid it in a secret annex. Now it has been rediscovered, there is a lot of work to be done because colonialism is, as Chen said, ‘on the streets’.

And he is speaking literally. The new consul-general for Ireland, bumped up to full-time status to get more Chinese trade, pointed out – with all the diplomacy of a late night session in Delaney’s bar – that everywhere he turned, the streets were named after his deceased compatriots: Pottinger, Kennedy, Hennessey. If Mr Chen hears of that, there’ll be not an (Irish) euro shifting. Up and down the streets too goes the police band from time to time, stamping their way along to British regimental marches, hoping that no one will notice. In what part of China do they wear kilts and play bagpipes, Chen might like to enquire?

Set back only a little from the streets and up a hill, there is the city’s most distinguished teaching hospital, named after Victoria Mary Augusta Louise, princess of Teck in the Kingdom of Wurttemberg, later Queen Mary of England.  Indeed there is barely a hospital of any size that is not named after a member of the British royal family, the only consolation being that the most locally excoriated of them, Prince Philip, got left with the dental hospital in Sai Ying Pun.

I am wondering whether to tell Mr Chen that a Wanchai government social welfare headquarters building still bears the name of the feckless, foolish, fascist Duke of Windsor. It might bring on an even more engaging apoplexy in his next speech but I am not sure that it is merely the relics of colonialism that bother him. He seems jolly upset at a continuing ‘de-sinofication at work’.

Apparently, Mr Chen is one of a school of thought which believes that the departing British left behind cells of colonialists to arrange for the rejection of the Mainland’s influence in Hong Kong. They have been devilishly clever and diverse in their doings. As a small example, there is a group of Muslim domestic helpers who sit in in a circle near the Tai Po railway station on Sundays and wail from the Koran over a midget amplifier. Although all I want to do is find a policeman and complain, you can see that the hundreds getting off the train who put up with it are being de-sinofied. 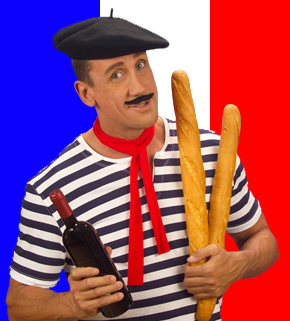 Cleverer still, the sneaky Brits who, having failed in London and exhausted FILTH, are now covertly encouraging FIFTH- ‘Failed in France, Try Hongkong’. Thousands of idle French, under cover of  making exciting discoveries in Sino-Gallic cultural fusion, are loafing around in Kennedy Town, dunking croissants in coffee and teaching the younger locals a sniffy, un-sino insouciance. Even worse, after ten glorious years of teaching in the mother tongue in government secondary schools, which has done so much to sabotage interest in English amongst the younger generation, these arrogant interlopers, who whisper to young people about barely cooked lamb, now insist that they speak in French.

Then Gordon Ramsay opens a restaurant.

You can see why Chen feels that something is afoot. I looked away from the East Rail carriage TV set on which I was watching him to see a middle aged white foreigner get on the train, bold as brass, walk down the compartment and sit down, like he owned the place. Then it struck me.  It was me  – and that man and other foreigners who stayed on and kept their clubs and formed their own dragon boat teams – whom the colonialists left behind. I am a ‘sleeper’ agent of colonization and de-sinofication without even knowing it. Every time I say something socially democratic or call my own country’s leader Cameron ‘posh money’ or Obama ‘all hat and no cattle’, or quote Samuel Johnson’s ‘patriotism is the last resort of the scoundrel’, I am ‘de-sinofying’ all within earshot. I am what Mr Chen wants eliminated.

The radio is just now telling me that Chen has erupted again. I am wondering if he has heard about the Duke of Windsor building but it seems somebody has told him about the ‘localist’ movement. Again the waves are crashing on the rocks and the spray is a bit confusing, but he has been clearly heard to say that ‘you cannot have a home without a country’.

The game is up, chaps. Sleeping though we are and didn’t know it, what Mr Chen really wants is for we vestiges of de-sinofying colonialism to go back to our country. Let’s sell our properties, move out what we’ve got and tell everybody back there to come here only as tourists or businessmen on short trips who have fun not knowing how to use chopsticks. That includes the French. You know it’s the right thing to do.

Beijing speaks: Eliminate what can't be regulated! But kilts or croissants first?