Recently, a controversial proposal was made to cut some tram routes and services between Admiralty and Central, a proposal which many people view as regressive. Far from scaling back our city’s pioneering electric transport infrastructure, it can be argued that we should actually be expanding it in the face of the global climate crisis, as well as ensuring that the power-generation source for it is clean and green. Every other major city in the world is either installing (or considering installing), new tram and light rail networks, because they demonstrably relieve traffic congestion, they are highly convenient (due to their surface-level hop on-off use), and have lower carbon-footprints and are far less polluting than diesel buses. They also add charm, help in reinforcing cities’ brand identities and provide highly visible, dynamic advertising space in our cityscapes.

Innovative rail schemes can also be very beneficial to a city’s infrastructure and environment. A notable example is the East London Overground line, which reclaimed Victorian viaducts in the east London districts of Shoreditch and Hoxton as part of the new orbital Tube line. The London Mayor, Boris Johnson, has said that he believes this helped London to beat Paris in its bid for the 2012 Olympics.

This is in part because studies show cities whose residents are active are also those where people are likely to be more productive and positive in their outlook.

One thing I have noticed in Hong Kong is cyclists riding, rather riskily, along the tramways, between successive trams, occasionally darting out into the road lanes to pass them. An alternative to this rather risky behaviour might be, as some have advocated, to “green” the tramways, pedestrianising some appropriate zones; but also to create a cycling-dedicated “Highline” filigree suspension bridge directly above (and safely enclosing) the power cables that drive the trams – right along the whole length of the tramway route.

In this way the legendary trams of Hong Kong could be preserved while also adding a brand new, elevated and therefore safer cycling route for the main transport spine of Hong Kong island.

This solution could be extended to another Sky network over the expressways of Hong Kong and Kowloon, featuring cycle ways, e-cycles and Personal Rapid Transit pods. 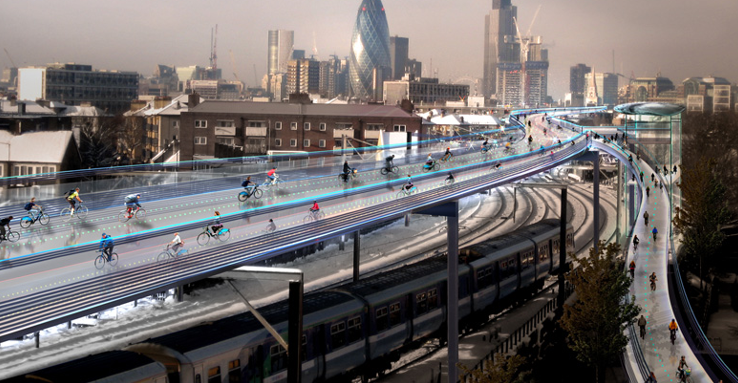 Looking to future possibilities,  this dual tram-cycle route system could  follow some of the surface MTR routes on the island. New tram-cycle routes in Kowloon could be added wherever traffic congestion is at its worst.

These Sky-Cycle routes could also feature lightweight Solar PV canopies which would serve the dual purpose of providing shade and rain-cover while feeding power to the route’s lighting and advertising signage, as well as e-cycle charging stations.

Finally, to ensure truly zero-carbon power for our city, why not replace our dirty coal power with renewable marine, solar and wind power, and aquaculture farms. The power generated could be used to charge our pollution-free e-vehicles, power our city directly, grow clean food in fish and land-based farms, desalinate seawater and potentially produce hydrogen for vehicles and building fuel cells (via seawater electrolysis or from imported natural gas), as is being done now in Japan, Denmark and many other places.

This may seem unrealistic, but research is increasingly predicting a dire future for the planet if we do not take action now.
A NASA-funded study concludes that modern industrial civilization across the globe will begin to collapse in as little as 15 years.

Another study predicts the loss of all oceanic coral reefs within 30 years, along with the marine fisheries that supply much of our food reserves. As a parent whose children will come of age in around 15 years, this is naturally a pretty disturbing, dystopian prospect. Environmental degradation, crises in the supply of food and water and increasing human conflict as a result could mean much of the world in future enduring the conditions of countries experiencing civil war today, such as Syria.

Clearly there’s something about the current civilisational model that is dysfunctional – since it is allowing this destruction to proliferate.

As Walter Kwok was recently quoted as saying when sending off his Oxford Scholarship holders, what Hong Kong values most is “stability and prosperity”.

Well, neither of these are possible without the city itself being, sustainable.

Part one of two by Nigel Reading. Click here for part two.

For the sake of the climate, expand the trams, don't scrap them