While strolling through a Wellcome supermarket one evening, I saw the staff removing 30 or so packs of unsold meat from the fridge, and putting them in a black plastic garbage bag. I asked whether it was going to be thrown away as trash. The friendly worker nonchalantly replied “yes”, as if it was the most normal thing in the world.

These packs of unsold meat, sitting in foam trays and enclosed in plastic wrap, will be sent to the nearby landfill. There, they will decompose anaerobically, emitting a horrendous stench and methane, a greenhouse gas at least 20 times more powerful than CO2. In 2012, research by Friends of the Earth (FoE) revealed that Hong Kong’s supermarket chains were throwing away tons of food everyday. FoE estimated that the big four supermarket chains: ParkNshop, Wellcome, China Resource and Jusco (now renamed Aeon) combined were sending 87 tonnes of food to the landfill each day. According to FoE, “In a year, the food they throw away is equivalent to the weight of two thousand double decker buses.” Of that amount, one third is bread, vegetables, fruits and even sushi that is still edible. Two thirds consists of peel and expired food which they classified as non-edible (However, as John Oliver explains in this hilarious segment, the expiration dates set are quite arbitrary and most food is still edible well past the expiration date).

Back then, Wellcome told FoE that they were considering turning the food waste into compost or animal feed. Three years have passed, so we’d like to ask Wellcome: “Have you finished considering? What targets you have set? And what measures have you taken to reduce food waste?”

The meat in this photo is still edible (I don’t believe that supermarkets would remove it from the rack only after it is rotten), it should therefore be donated to charity for distribution to low-income families or the substantial elderly population that is living in poverty. However, since there is no law requiring them to do so (in addition, to the fact that it is still free for supermarkets to dump waste into the landfill), the simplest and easiest solution is to continue to throw unsold, edible food into the landfill. To discourage dumpster diving, some supermarkets even adopt measures such as pouring bleach on discarded food. 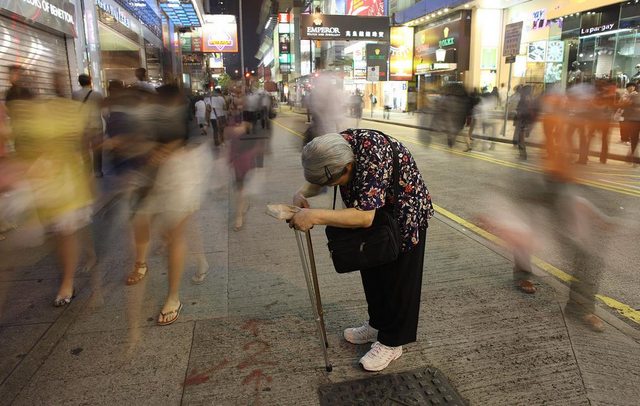 Targeting the wasteful behaviour of supermarkets, the French Assembly unanimously passed a law this May which forces big supermarket chains to give away unsold food to charities. According to the Guardian, “Supermarkets will be barred from deliberately spoiling unsold food so it cannot be eaten. Those with a footprint of 4,305 sq ft (400 sq m) or more will have to sign contracts with charities by July next year or face penalties including fines of up to €75,000 (£53,000) or two years in jail.”

Hong Kong ranks no.1 in inequality: the gap between the rich and the poor is the largest among all developed countries. One third of the elderly population (65 or over) lives below the poverty line. That’s why we always see old folks with bent backs, pushing heavy metal carts to collect waste paper or discarded metal in order just to survive. No matter how much supermarkets reduce prices on this unsold food, these seniors will never be able to afford to buy it. GoGreenHongKong urges the supermarket chains to stop throwing away good food and instead donate it to charity for distribution to low-income families and the elderly.

Established in 2011, GoGreenHongKong is Hong Kong's most viewed sustainable living website. It got its start providing objective and unbiased reviews of green products and services. It now also analyses policies and issues relevant to environmental sustainability.