I had not heard very much of Mr Vincent Fang before he emerged from the sticky honeycomb of wealth and connections to become leader of the Liberal Party—a role which probably adds up to who at the end of a game of bridge goes out of the door first. It does not really matter because Mr Fang will become even less heard of when he ceases to be the leader. It’s a role from which people evaporate and, if you do not have a strong reputation before you take it, you find yourself blown as dust into the “What was his name/ Is he still with us?” category.

This is because the Liberal Party has little intellectual oxygen in its air so that even those who choose to be inside to start with have to run off to breathe eventually. It’s the Hong Kong rich man’s boutique version of UKIP. God knows: It does not reflect the resentments of the common man. Fang’s colleague, Tommy Cheung, believes that the common man can get by on HK$20 an hour. He and his fellow members would pick their way fastidiously over the unfortunate fellow on their way to cocktails. The party does however reflect the feelings of the man of common thoughts and uncommon amounts of money—a man who understands liberalism to mean helping oneself from whatever of the common weal is within his grasp. The Liberal Party probably scratches around beneath the needs of the property tycoons. It may better reflect the insecurities of ex-Shanghainese textile barons among whom Fang’s masters qualification in yarns from North Carolina is equivalent to a Fellowship of All Souls. It presents issues as big squares of sweet and simple caramel which have no real centre but, after a few chews, clamp your teeth together and pull your fillings out.

Fang handed out a big half-pound bag of the stuff over the weekend. First toffee out was that CY Leung should apologise to mainland tourists for the rudeness of the “localist” protesters. Exactly which “tourists” he has in mind for the Chief Executive to make obeisance to is not clear. The 7 million shoppers who were here at the time, the 7 million here now or the 7 million he hopes will cross over tomorrow?

Next out was the big fat nougat that tourism was down and the absence of mainlanders was ruining the catering, retailing and hotel businesses. And here comes the really chewy bit. Fang claims to be most worried about his friend, the man who is worth $20 an hour, and who now may not get it because of “nativists” daubed with mud and ochre. It must be a wonderful world in which you move from one unit of air conditioned upholstery to another, without ever coming into contact with the atmosphere—and where you have so many suits, none ever needs to be sent to the cleaners—even though quite a few of us want to barf up over Vincent’s jacket after chewing on a bag of his caramels. It is a world I would like a part in except that, in such a sugar rush of happy majorities passing by my S500 window, I may lose the knack of asking questions with hard centres.

Vincent, as a member of the Tourism Board among other august placements, does not seem able to ask a big question that occurs to those whose feet hit the sidewalk occasionally. Could it be that most real tourists are tired of Hong Kong?

If I didn’t live here, I’d never set foot in the place. I am not interested in jade, pearls or a camera. Suits made here make you look you are off to British NCO’s reunion dinner. A remortgaged bungalow in Penge in Southeast London gets a week at a “four-star” in Yau Ma Tei or you die of fright at Chungking Mansions. You visit the fog on the Peak and get accosted to exhaustion in Tsim Sha Tsui. In the New Territories, through stacked containers and different grades of rust and crap, you may find an ancestral hall. Out of the five Southeast Asian cities I am in from time to time, Hong Kong is the one in which I can regularly expect to be served a bad meal for a lot of money. 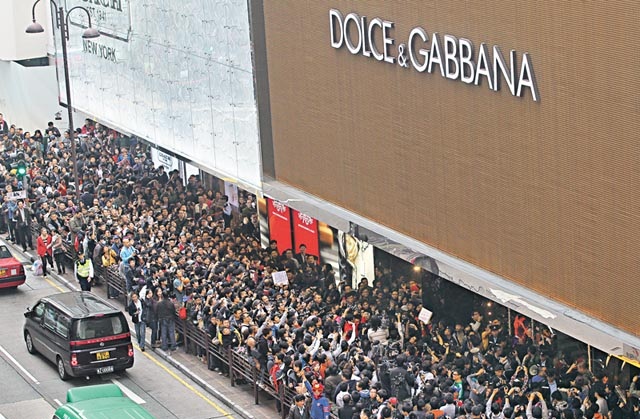 The Liberal response this weekend was a raspberry in caramel offering which has dissolved fillings before but it seems is worth another try. Let the scruffs of Shenzhen across again to trade in as many tins of milk powder as they like. Now, you can only feed ideas like this into the body politic so often before your provoke antibodies and they appeared. The “localists” demonstrated again in Sheung Shui.

There weren’t many but the police, widely appreciated now as the Harmonious Society Protection Militia, were edgy enough to be about in numbers, removing the more vociferous to vans under new harmony regulations. Their instincts are correct. Localists are Hong Kong’s ISIS coming out of Mosul. They are swift and they can be everywhere. They make Occupy look clumsy.

The Liberals will not see this coming. Soon they will be swinging from the lamp posts or in Cambodia but they had better hurry up. The real Shanghai guys are already there.

Property tycoon or mainland shopper? Vincent Fang's Liberal Party is here for you!