Boxing gloves raised, two orangutans enter a ring at a Thai zoo, a spectacle that fascinates locals and foreigners alike but sits increasingly at odds in a nation slowly embracing animal welfare.

Every morning hundreds of tourists visit Safari World, a large zoo on the outskirts of Bangkok, to see apes perform a show parodying human behaviour — in particular our predilection for violence, sex and alcohol.

“It’s one of the funniest things I’ve ever seen,” Aisha, a 23-year-old tourist from Sri Lanka, tells AFP. “It’s incredible what they’re capable of.”

But others are less enthusiastic.

“I don’t like it at all,” says Erwin Newton, 30, from the United States. “I don’t understand, what is interesting in making animals behave in this violent, dirty way.”

To outsiders, Thailand’s treatment of animals can appear confusingly contradictory. This photo taken on July 9, 2015 shows orangutans performing for an audience at Safari World, a large zoo on the outskirts of Bangkok. Photo: Pornchai KittiwongSakul

In this deeply Buddhist country it is not unusual to see pampered pooches pushed around in prams or entire temples providing sanctuary to stray cats and dogs.

Yet dogs might also be on a dinner table in the northeast of Thailand while the kingdom — a renowned animal-trafficking hub — retains its long tradition of blood sports such as cock and bull fighting.

But there are signs that public attitudes are changing.

The first-ever animal welfare law was adopted in late 2014 — under the ruling junta — after years of campaigning by a growing bevy of increasingly vocal animal rights groups.

The law now specifically bans “torture and cruelty towards animals” with exemptions for activities that are part of the country’s traditions.

‘There must be rules’

The country’s animal fighting industry is also trying to make itself more humane.

Unlike in the Philippines, where cocks can be seen fighting with blades attached to their feet, Thailand’s birds now usually spar with their talons wrapped in fabric.

The cocks are judged on their fighting prowess, not their ability to kill their opponent, an event that is much rarer thanks to recent changes. 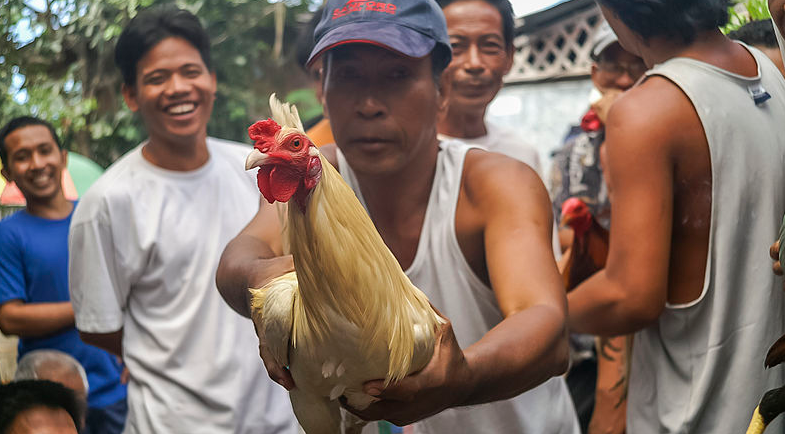 Thailand’s bull-versus-bull fights, especially popular in the south, also rarely lead to deaths, unlike the man-versus-beast version still thriving in Spain — and the bulls themselves are treated with celebrity status.

“Even in animal fights, there must be rules,” says Chaichan Laohasiripanya, Secretary-General of the Thai Society for the Prevention of Cruelty to Animals.

“They must consider the health of the animal, the length of the fight,” she said.

Suddan Wisudthiluck, an anthropologist at Bangkok’s Thammasat University, says the shift towards making the country’s traditions more animal-friendly stems in part from people keeping pets, especially in the cities.

“Animals are more and more seen as friends or family members,” he said.

All across Bangkok and other urban centres, salons, hospitals and clothes shops for pets are almost as ubiquitous as 7-Eleven shops and street food hawkers.

In July the arrest of a village headman who killed his neighbour’s pet dog after an argument was front-page news in Thai media for days.

But despite recent police crackdowns Thailand is still host to a thriving dog meat trade in the northeast to feed both local appetites and those in nearby Laos, Vietnam and China where canines are a delicacy.

Elephant rides are another popular tourist attraction that causes disquiet among activists, who say Thailand’s national animals are often overworked and stressed ferrying tourists every day.

In late August an elephant in northern Thailand went berserk, killing his keeper before running off into the jungle with three terrified Chinese tourists still on his back.

But the unease over their treatment has also led to the creation of an increasing number of ethical sanctuaries where visitors are encouraged to view elephants in their natural surroundings and no rides are permitted.

But laws can only go so far if they are not enforced.

Few attractions highlight the limitations of Thailand’s ability to enforce its own legislation more than the controversial Tiger Temple in Kanchanaburi.

Authorities say nearly 150 tigers have been kept at the temple without proper paperwork and have vowed to seize them, sparking standoffs in recent months between officials and angry monks blocking their way.

But the government has been powerless to resolve the issue, partly for fear of being seen to confront the clergy and also because officials readily admit they have nowhere else to put such a large number of tigers.

Edwin Wiek, a campaigner from Wildlife Friends of Thailand, says Thailand’s animal rights journey has been typified by two steps forward, one step backwards with law enforcement his “biggest concern”.

Some people “just care about money and don’t hesitate to use (animals) to make some”, Wiek told AFP.

“But I think most Thai people love their animals.”