A week after massive blasts at a chemical storage warehouse killed at least 116 people in Tianjin, China, thousands of dead fish appeared in a river near the explosion site. Local residents feared the fish were poisoned by cyanide that leaked from the warehouse into the waterway.

To prevent panic from spreading, the Tianjin Environmental Monitoring Center announced that cyanide levels were “zero” in three water samples collected along the coast on August 20.

Though the cyanide levels of water sample collected from a rain water pump station and at the center of the crater was 356 times and 800 times above standards respectively, the bureau stressed that the polluted water had been sealed off at the explosion site and ruled out a link between the dead fish and chemical leakage. Yet, even outside the quarantine zone, some water samples indicated that the cyanide levels reached up to eight times above normal. 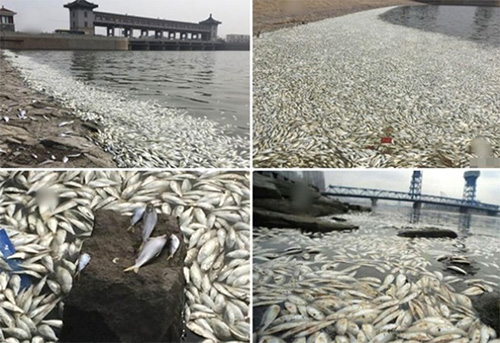 Earlier this week, Chinese authorities confirmed that 700 tons of highly poisonous sodium cyanide were stored in the warehouse when the explosions took place on August 12.

In a press conference on August 20, Deng Xiaowen, director of the Tianjin Environmental Monitoring Center, said that the fish could have died for many reasons, such as a change in water temperature or levels of salt or oxygen. He also pointed out that the water quality in Tianjin has historically been poor and similar incidents have happened before.

But many found the explanation hard to believe. Cartoonist DSX’s latest work (see top image) captured popular skepticism with a piece that depicted a pair of fish near several fish gravestones, listing homicide, suicide, suffocation, drowning and fits of rage as their cause of death.

Sina headline: Massive amounts of dead fish found in Tianjin Harbor, six kilometers away from the explosion site.
These fish felt ashamed. They saw that so many people had died. They felt sorry and drowned themselves. Those bastard government officials and corrupt businessmen should die instead. Now, you fish are dead and the motherf***ers still insist it is normal.

On popular social media website Weibo, local media outlets quoted many experts to explain that what happened to the fish was not related to the explosions. But as Weibo user Xue Hanbo pointed out, this failed to assuage people’s fears:

Though [the authorities] explained what happened to the dead fish, the clarification did not address people’s doubts. Perhaps the answer was the truth, but the investigation process was not transparent enough and the government has lost its credibility already. As a result, a simple answer seems to have generated more doubts. As the issue at stake affects ordinary people, [the authorities] have to involve people in the search for answers and let the media cover the news objectively.