Chinese authorities’ handling of the Tianjin explosions bears many of the hallmarks of their standard approach to the litany of disasters in the country — a clampdown on discussion, official obfuscation, and carefully targeted media condemnation.

But it has been unusually ineffective, analysts say, with a lack of transparency compared to previous disasters that has created an image of indecision or even possible infighting at the highest levels of power.

The August 12 explosions at the hazardous goods storage facility in the port of Tianjin set off a giant fireball, killed 114 people, devastated a vast area and raised fears over potentially toxic contamination. They are only the latest in a series of man-made calamities to strike the Communist country. Two months ago a ferry capsized in the Yangtze River, on New Year’s Eve in Shanghai a crush killed dozens and a pipeline explosion in Qingdao devastated an entire neighbourhood.

Central authorities look to portray such events as the result of individual, local failures, rather than consequences of China’s system of governance, and are quick to suppress any online blame targeting the central government or the system as a whole.

China has punished 50 websites and 360 social media accounts for “spreading rumours” about the Tianjin blast, authorities have said. A mourner marks seven days since the blasts in Tianjin. Photo: ECNS.

But local authorities have been condemned online and in state-run media for not rapidly disclosing details of what chemicals were present on the site.

“There is a feeling that the authorities are stalling and not being forthright with the people because they are still trying to determine what the next step is,” said Joseph Cheng, a former political science professor at the City University of Hong Kong.

“Man-made disasters like the Tianjin explosion reflect that society is not well managed because safety rules are not followed and corruption is rampant.” But Li only arrived in Tianjin on Sunday afternoon, several days after the Wednesday night disaster.

“Now most of the leadership is not taking responsibility, they’re afraid to take responsibility because they are afraid of losing their posts,” wrote one user on Sina Weibo, a Twitter-like website.

The delay was “very strange” said Willy Lam, a political science professor at the Chinese University of Hong Kong, “especially since Tianjin is just a short train ride from Beijing.

“When it comes to natural or man-made disasters, we used to see Grandpa Wen on the scene within 48 hours.”

Li rushed to June’s ferry disaster — which killed 442 people — less than two days after the capsize. Last August he was at the scene of an earthquake that killed more than 600 people for several days, and featured prominently in China’s state-run media.

“This suggests there is a division among the leadership on who should be the fall guy,” Lam said.

Accountability for disasters in China is variable. Following a collision between two high-speed trains in Wenzhou — which tarnished the reputation one of China’s flagship projects — the railways ministry was abolished.

In the pipeline explosion in Qingdao, 48 people were disciplined, including Fu Chengyu, chairman of the company that owned the pipeline, but only 15 faced criminal charges.

But no-one has ever been prosecuted over the deaths of more than 5,000 children in an earthquake in Sichuan, when their shoddily built schools collapsed but buildings used by officials remained standing, raising widespread accusations of corruption. 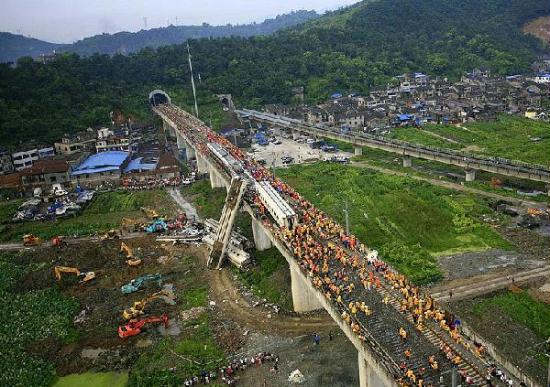 While in Tianjin, Li himself told Hong Kong’s i-Cable TV: “We must investigate the accident, find the cause of the blasts and anyone who acted illegally will be severely punished.”

Authorities have been lambasted for failing to uphold industrial regulations, notably requirements that warehouses stocking dangerous materials be at least one kilometre from surrounding public buildings and main roads.

Internal principles link disaster death tolls to the rank of official who will ultimately be held accountable, Lam said.

“If it’s under 200, only the vice mayor of Tianjin in charge of safety will need to resign,” Lam said, adding he is the “obvious fall guy”.

But in the case of Tianjin, current mayor Huang Xingguo is widely seen by analysts as part of the Communist party’s “Zhejiang faction”, which has close ties to President Xi Jinping.

He was a vice governor of Zhejiang province when Xi was governor, and Lam said the relationship could protect him from punishment, or limit any repercussions.

The head of China’s State Administration of Work Safety, Yang Dongliang, was put under investigation for “suspected severe violation of discipline and the law”, the Central Commission for Discipline Inspection said Tuesday, employing a phrase often used to indicate corruption.

“There’s still a fairly long way to go for China to become a developed and well-managed country,” Cheng said.