The UK government has granted Chinese dissident artist Ai Weiwei a six-month visa and apologised for refusing his application because he “lied” on his form.

On Thursday, the artist posted a letter from the British embassy in Beijing saying that his application for a six-month business visa had been rejected as he failed to declare on his application form that he had a criminal conviction. He was instead given a 20-day entry visa valid from September 9-29 only. Ai Weiwei posts a photo of himself holding his passport, which was given back to him four years after it was confiscated by the Chinese authorities. Photo: Ai Weiwei via Instagram.

Ai was arrested for alleged tax evasion in 2011 and was detained for 81 days. After his release he was prohibited from travelling to other countries until July this year when authorities returned his passport.

A Home Office spokesperson said: “This case did not come to the Home Secretary, and she is now looking into it.” The original letter to Ai said: “It is a matter of public record that you have previously received a criminal conviction in China, and you have not declared this.”

The letter goes on to add that an exception was granted in his case and that any future applications “must be completed as accurately as possible.” The letter warned that failure to do this could incur a a 10-year ban from entering the UK.

The decision not to grant Ai his requested visa caused outrage among human rights groups, with others suggesting that it was partly influenced by President Xi Jinping’s first official state visit to the UK in October. 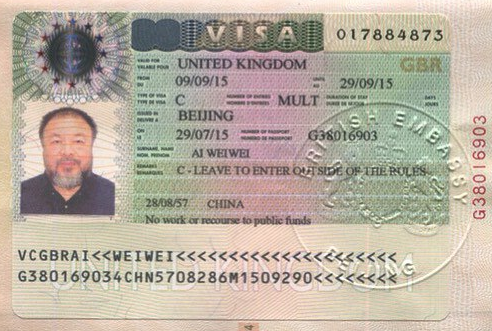 In a previous statement, the Home Office stressed that reports about Ai Weiwei being barred from entering the UK were inaccurate and that he was still allowed to enter. However, the Home Office have yet to clarify what criminal conviction it believes Ai has.

Ai is best known for designing Beijing’s Olympic stadium, the Bird’s Nest. In the UK he is also known for filling the Tate Modern, one of country’s biggest art galleries, with ceramic sunflower seeds.

He will be in London in September for the opening of his new installation exhibition at the Royal Academy of Arts.