Scores of Taiwanese students were today surrounding Taipei’s education ministry building following the suicide of a student activist who was campaigning against new curriculum guidelines, which many believe are China-centric.

Activists took to the streets last night, storming the ministry building as news emerged that Lin Kuan-hua, a 20-year-old spokesman for a student group campaigning against the curriculum changes, had been found dead on his birthday.

Around 100 students surrounded the legislature for about 45 minutes yesterday evening, before moving on to occupy the education ministry building, according to media reports.

Lin is believed to have committed suicide on Thursday the morning of his birthday. 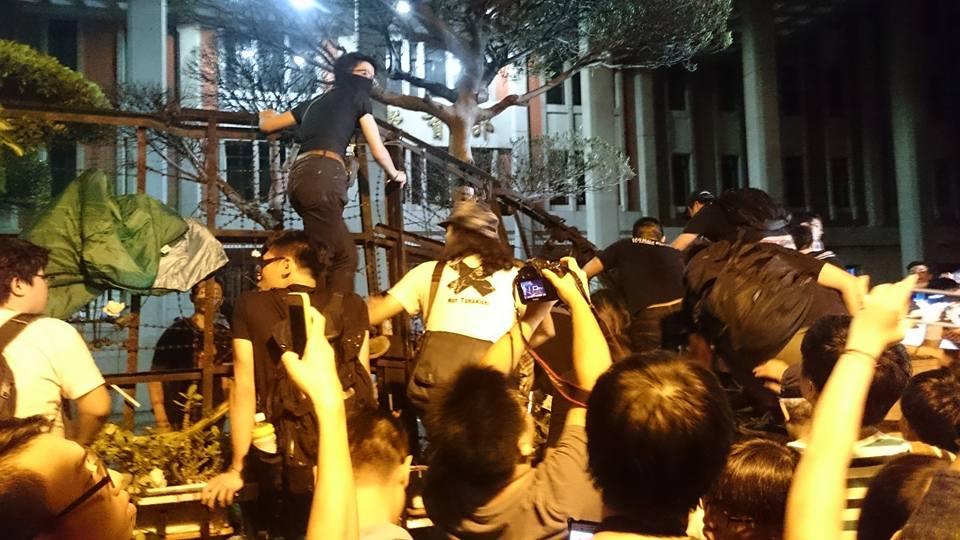 His peers were devastated by the news and vowed that the education ministry “would pay the price” for Lin’s death. As students surrounded the legislature some said that they wanted to fulfil Lin’s birthday wish of seeing the curriculum guidelines withdrawn.

Those gathered sang a birthday song in tribute to the young man and chanted, “Lin, are you watching this?”, while some threw traditional paper offerings at the education ministry complex, calling Education Minister Wu Se-hwa a “murderer”.

Wu had said earlier that he was “shocked and saddened” by the news, and felt guilty for not being able to save Lin’s life. But students accused him of lying and demanded that he apologise and step down.

The education ministry later admitted that it had received intelligence that Lin would take “extreme action” on his birthday. The authorities held a meeting to discuss it and decided to ask Lin’s school to follow up.

One student who said he was Lin’s boyfriend addressed the crowd on Thursday evening, saying he hoped society would focus on the curriculum issue instead of Lin’s suicide. Lin had earlier said in a TV programme that he felt pressured by the principal and homeroom teacher of his school, who had visited his home voicing concerns about his involvement in the anti-curriculum campaign. But the school principal denied she had been too harsh on the young activist, according to media reports.

While police are still investigating the reason for Lin’s death, his family reportedly said that he seemed depressed after his arrest at an anti-curriculum protest last Thursday. Lin had recently asked his sister why he might face prosecution “even though the curriculum guidelines were wrong and he was doing the right thing”.

The education ministry had said that it would pursue legal action against those who broke into its building and damaged public property, despite widespread criticism and politicians’ objections. 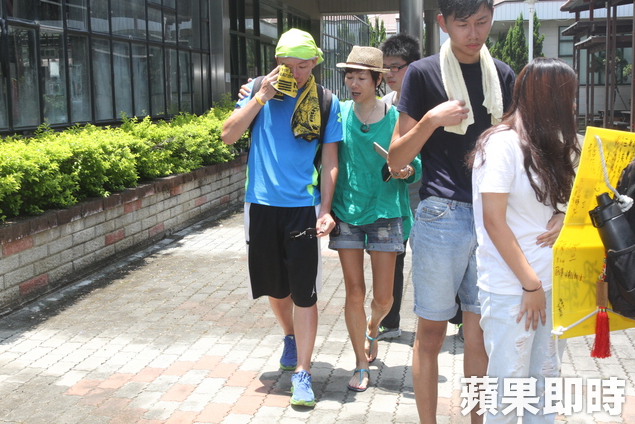 A group chat disclosed by Lin’s peers suggested that he may have planned his suicide as a way of escalating the campaign. In the group message, Lin said that he had a good plan for stopping the new curriculum guidelines from being adopted by schools across Taiwan.

When his peers asked if it was class boycott, Lin replied: “Something more constructive than student strike. The introduction of curriculum guidelines will begin on August 1; my plan is on July 30.”

Lin did not reveal details of his plan, but said he was confident that it would succeed. He said: “I want to spark a wild fire in the media discourse. Let me block the curriculum guidelines for you all.” 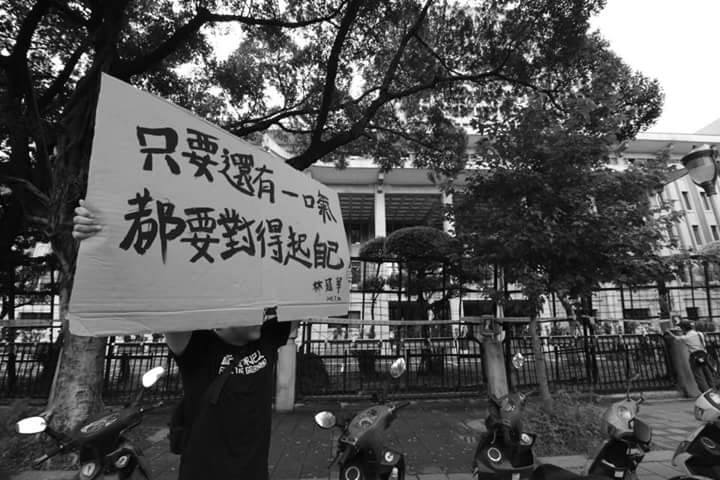 An activist held a placard of Lin’s quote that says, “I must maintain my conscience while I’m alive.” Photo: 馮光遠 via Facebook.

Lin’s suicide has intensified tensions between Taiwan’s major political parities. The pro-independence Democratic Progressive Party (DPP) has repeatedly shown support for students in the nationwide campaign against the change in curriculum guidelines. DPP caucus whip Ker Chien-ming said on Thursday that Lin’s suicide marked “the darkest day of Taiwan’s history of education”, and promised to stand with the students.

Lin Yi-hua, a spokesperson for the pro-reunification ruling party Kuomintang (KMT), said that the DPP provoked students to “stand on the front line of the struggles” while hiding behind them. He said that the government had already agreed to make some concessions, but said that the DPP had not informed students.

KMT’s response to Lin’s suicide has been widely criticised by people who regard the incident as a result of the government’s continual neglect of students’ demands. A well-known commentator, who was present at Thursday’s protest, said KMT’s pro-China stance was ultimately the cause of Lin’s death and students’ struggles against the new curriculum guidelines. Thirty students, including Lin, were arrested at an anti-curriculum protest on July 23. Photo: Yu Yo Lin via Facebook.

Taiwan’s current government, led by President Ma Ying-jeou, has made a series of changes to high school curriculum guidelines since Ma took office in 2008. In 2014, authorities announced new adjustments to the guidelines that were widely considered China-centric.

A number of protests have taken place in response to the perceived “black box”, or non-transparent, policy-making process of the Taiwanese government. Around ten students broke into Taipei’s Education Administration building two weeks ago, but none were arrested. Student groups subsequently promised to step up the campaign.

Supporters of the new curriculum guidelines argue that the changes are in accordance with the constitution. A journalist for United Daily News wrote that changes such as referring to China as “mainland China” rather than “the mainland” prove that the new guidelines are not China-centric.