These days, it is almost a cliche to describe the Hong Kong Police as turning their backs on crime to fulfil political, guard duties for CY Leung’s government. But that’s what they were doing on Sunday night on Sai Yeung Choi Street.

The back story to what now takes place almost every Saturday, Sunday and public holiday evening in Mong Kok looks like this. A group of ‘aunties’ supported by a motley crew of late to middle-aged men congregate to sing and dance to traditional Chinese songs songs. Regular patrons of Sai Yeung Choi Street have various problems with this newly introduced behaviour. Firstly, these groups take over the whole street with their dancing and extremely loud music, and if anyone dares to challenge them to turn it down, then they are met with hostile reactions. This kind of behaviour is exasperated when you speak to local musicians who have been playing in Sai Yeung Choi for years.

I have been speaking with these musicians, and they all said that they feel marginalised by the introduction of the mainland dancing aunties onto the street. They told me: “Those aunties complain that our music is too loud, and the authorities make us turn ours down. But when we complain about their loud music or aggressive behaviour nothing happens, the authorities turn a blind eye.”

All of the local musicians lamented that it appears the aunties have the protection of some powerful people and so act with aggressive impunity towards anyone who dares to challenge them. Many were in agreement that there seems to be a concerted effort to introduce this reddest of red communist past time to Hong Kong’s streets, regardless of the consequences for the local culture. So, while the local artists find themselves being pushed back, the revolutionary aunties and their admirers have expanded. In come the localists

That was until the localist groups took an interest in the musician’s plight. With an ability to regularly mobilise two to 300 protesters at any time, localist groups now have a proven track record of being able to capture the media’s attention on any topic of their choosing.

They revealed to the world the long-suffering difficulties of local communities overrun with swarms of smugglers and the stark contradictions in the government’s policies on street hawkers. The dancing aunties have now become another hotly debated topic that most people know almost nothing about.

For the localists, the dancing aunties are an alien, cultural invasion that degrades local identity and introduces an unwelcome glorification of the Chinese Communist Party (CCP) into Hong Kong. 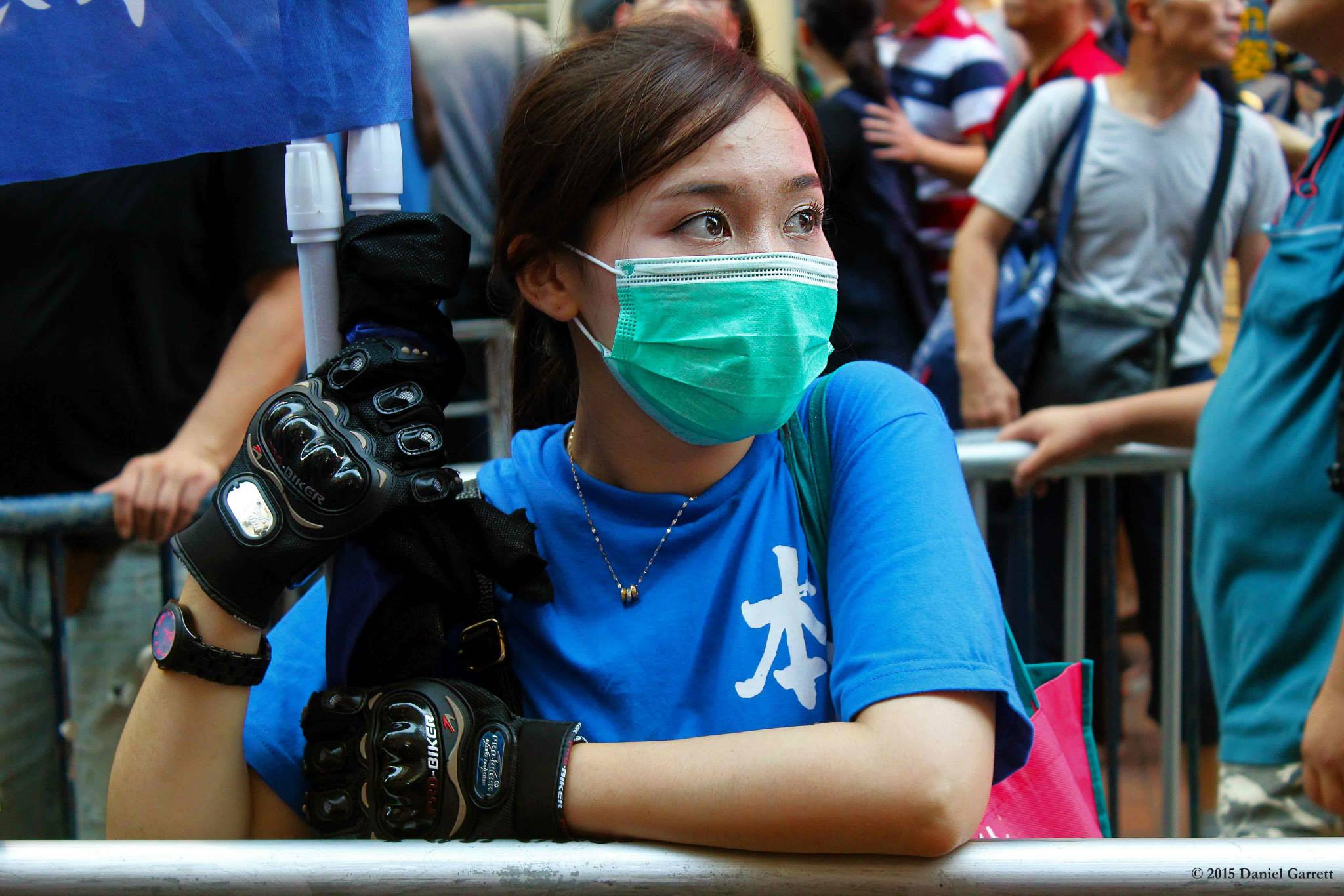 On top of this – and most importantly – what the aunties are doing is illegal. The agreed format for performers on Sai Yeung Choi Street is that space is allotted upon a first come first serve basis. Anyone can perform, but without a license it is illegal to take money from the public. The dark principle behind the aunties’ shows is that the ladies in attendance sing and dance for money, which they receive via red packets. It’s a form of ‘soft prostitution’, as the aunties let the men ‘get close’ and they receive hard cash as a reward.

The tone and the vibe of the songs may be politically supportive of the Mainland and CCP. But, in essence, this is a monetary transactional relationship, heavily tainted with sexual undertones, taking place on a street allocated for performers. Making it illegal.

To be clear, offering any form of sexual favours on a one-to-one basis is not illegal in Hong Kong, but when there is more than one girl involved in the process, then it is. The loophole behind this is that there are many single-girl-brothels all over the territory, or when in Wanchai, patrons to bars don’t pay for girls, they pay for expensive drinks.

On Sai Yeung Choi Street what is flirting with illegality is bringing groups of dancing, singing girls together to exchange money for sexually charged encounters. Let’s be clear, no one is having sex on the street, but the men are paying, and the aunties are letting them have a feel while dancing. It is undeniably a sexual transaction. There are many investigative reports on these encounters where old men openly admit spending all of their money on the ‘pretty girls’. In one such investigation, a video shows singers receiving numerous red packets from men in Tuen Mun. This accusation of accepting cash for sexual favours and breaking laws covering prostitution is in reality hard to pin unequivocally upon the aunties. But what is clear is that they are taking the money while performing on the street, this is fact and is unquestionably breaking the law.

Citizens have filed complaints about this practice. But rather than mobilise the Food and Environmental Hygiene Department (FEHD) to investigate, the Mong Kok police have instead mobilised its police tactical unit (PTU) to ensure whatever the aunties are doing – illegal or not – continues unfettered, presumably under some mistaken notion of protecting freedom of expression and the right to assembly.

So the question arises, in a city where a man fixing people’s bikes for free and taking HK$10 to cover the cost of parts can be hauled up in front of the magistrate for illegal hawking. Why are the FEHD not investigating and why are the police turning their backs while aunties receive hundreds of dollars a night for offering old men soft prostitution services on the street in plain sight?

The obvious retorts to this question are that the police are not aware of what is going on. However, this ‘hear-no-evil, see-no-evil’ approach to law enforcement simply doesn’t hold up in reality. On Sunday night, Frontline Media easily took photographs of the aunties receiving payment while a horde of police stood just one metre away.

In plain sight money was changing hands while the police focused all of their attention on the much-vilified localists who were, in fact, not breaking any laws by being there. If the police turned just one of their cameras on the aunties, they would quickly capture the illegal behaviour everyone is complaining about, and just like the friendly bike-mender they would be up in front of a magistrate. You may then argue, well it isn’t the responsibility of the police to micro manage street performers, this is the job of the FEHD. Yet, I have also witnessed the police closing down would-be buskers within minutes because they tried to collect money.

So the police are not blind to what’s happening on Sai Yeung Choi Street. Instead, the only conclusion one can make is they are selectively enforcing the law depending upon who is in favour. Someone up on high has dictated that the aunties are patriotic and therefore they will stay! Regardless of how many police need to be mobilised to protect them and how much evidence there is to show them repeatedly breaking the laws covering street performance.

With the police only motivated to throw more PTU at the street performer’s impasse and the FEHD nowhere to be seen, what may you ask are the localists plans for the aunties? Their strategy is very succinct. For them, the anti-aunty campaign is a low-cost, economic attack upon the aunties, with the broader goal of keeping the topic of the mainlandisation of Hong Kong in the media.

Between the groups, the cost of the protests is low. They expend little effort either in manpower or risking arrests, yet eventually they believe they can financially cripple the aunties’ money channels. 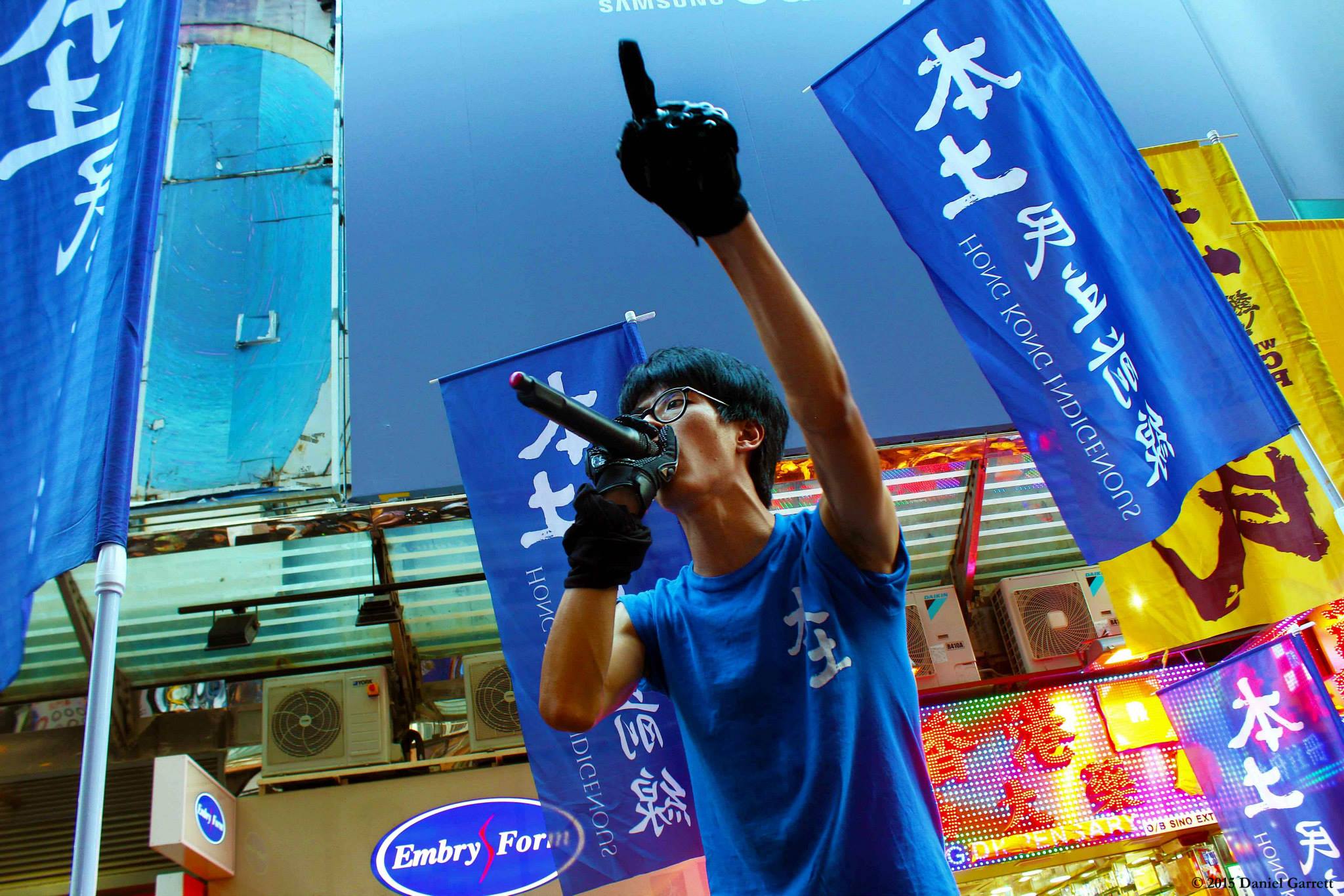 The protests are a classic guerrilla tactic that closely mirrors such direct action groups like Sea Shepherd. Who knows that they can’t match the Japanese Whaling operation dollar for dollar, but they can block it at every turn, making it financially unviable to continue in the long term.

So, rather than being irrelevant bickering over music tastes, the aunty protests show us that localist protests are not being driven by an irrational hatred of mainlanders. Instead, they bring into sharp focus the favouring of a policy of mainlandisation by CY Leung’s Government. The policy is chipping away at Hong Kong’s sophisticated, local culture and works only to the detriment of Hong Kong’s once proud police force and its impartial rule of law.

Are the police selectively turning their back on crime?