A video of workers throwing glass bottles intended for recycling into rubbish bins has surfaced online.

The men are seen unloading glass bottle recycling bins from a truck, before dumping the contents of each into large rubbish containers.

At least seven other empty glass bottle recycling bins are seen lying around the rubbish containers. Their contents are believed to have been emptied in the same manner. 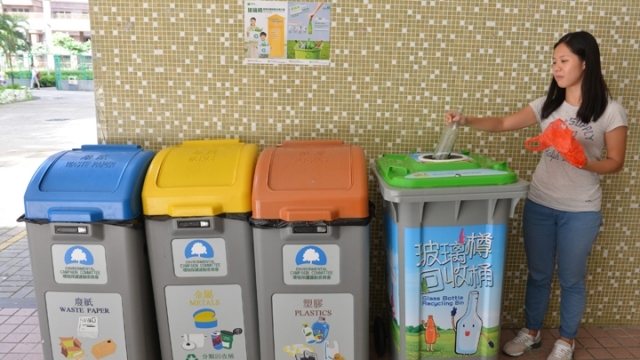 The video was uploaded on Wednesday to Facebook page Hong Kong Highway Wonders. One user commented: “Efforts from public housing estates all go to waste, including mine!” Another said: “Dumping it back into rubbish bins?! And we have to pay you to do this!”

In March 2013, street cleaners employed by the government were caught illegally throwing away items intended for recycling into landfills together with general waste. Rather than being dumped at landfills, local materials to be recycled are meant to be “exported for overseas processing”, according to NGO Green Power.

A total of 164 public housing estates are participating in the government’s pilot glass bottle recycling programme, which was launched in 2010.

The Environmental Protection Department, who co-organise glass bottle recycling services with the Housing Authority, have yet to respond to enquiries.

Update (July 30, 15:34): The EPD told HKFP that the workers filmed had unloaded the glass bottles into litter bins in order to “optimise the carrying capacity of the collection vehicle and thus enhance the effectiveness of the operation”.

They said that workers were contracted by EPD to transfer the glass bottles to a recycling facility located in Tuen Mun. The EPD also acknowledged that unloading of glass bottles would not “normally be carried out within the boundary of the housing estates” and promised to critically review comments on the video.