A Christian protester was beaten unconscious by local government staff during scuffles outside a church in Wenzhou, Zhejiang Province, according to a human rights website.

The news comes amid a year-long campaign by local authorities to remove exterior crosses from churches in the province, with officials claiming it is because they are illegal or unsafe structures.

However the cross-removing campaign is widely seen as a crackdown on the million-strong Christian population of Wenzhou. Protesters lie on the ground outside the church (left), while a man is treated by medics (right). Photo: 路上的仟毛 via Weibo.

According to Boxun – a US-based news website covering human rights and political issues in China – the latest fracas took place on Tuesday outside a church in the town of Pingyan. Violence erupted after local officials tried to forcibly enter the church to remove a crucifix.

A witness quoted by the website said worshippers had attempted to block the doors of the church as authorities broke in, knocking several people to the ground. During the clashes, a male protester was beaten unconscious and was taken to hospital, the site reported. 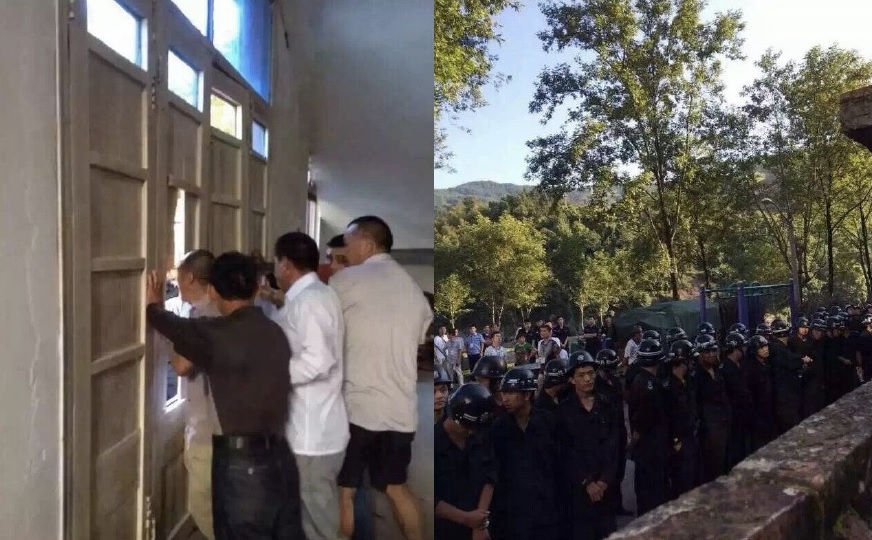 Churchgoers attempt to barricade the doors (left) while police gather outside the church. Photo: 路上的仟毛 via Weibo.

In a bid to stand up for their religious beliefs, Christians in the area have launched a cross-making and wearing campaign.

One Christian based in Wenzhou uploaded pictures on the social media platform Weibo showing people making crosses out of wood and painting them red in what appeared to be a small workshop. Churches in the area have urged Christians to hang crosses up at home and wear them.

According to Boxun, local authorities in Zhejiang kicked off a two-day crackdown on churches beginning on Monday.

Christian protester 'beaten unconscious' in scuffles outside church in China