While our group is prominent in the campaign against Leung Chun-ying’s Innovation and Technology Bureau proposal, we do not completely disagree with the establishment of such a body. If executed carefully, it could accelerate breakthroughs in our current economic conundrum.

What worries us in Leung’s proposal is the lack of detail and key performance indicators to keep the government in check. With Leung’s track record, we can hardly bank on his will alone to bring us a successful ITB. In addition, given his many broken promises, we have no faith in his vacuous statements and slogans. These are demonstrated by his recent hasty resubmission of the same ITB proposal to Legco, without any change and after much criticism, back in February. That is what triggered our full force campaign against his proposal.

Pro-Beijing lawmakers Elizabeth Quat and Lo Wai-kwok, along with individuals who are considered pro-establishment, have formed an alliance to support the ITB amid criticism from the IT sector. Photo: Fight for Tech Bureau via Facebook.

Leaving Leung’s willful ignorance of the concerns of tech workers aside, the composition of the current Advisory Committee on Innovation and Technology is also less than reassuring. The 23 members — including Johnny Chan Kok-chung (private equity fund executive), Denis Tse Tik-yang (also a private equity fund executive), and Paul Chow Man-yiu (ex-CEO of Hong Kong Stock Exchange) — and the China-centric messages in the government’s promotional materials make us wonder: Is the ITB just another ploy to under-sell our position in global finance in order to promote technological development in mainland China, without asking for anything equally valuable in return?

Hong Kong may retain the shopfront position with the back factory in China, but how would it help our goal to pluralise Hong Kong’s economic composition? Will the proposed ITB create more employment opportunities in Hong Kong for local tech workers, or do they have to pack up and cross the Shenzhen river for that? 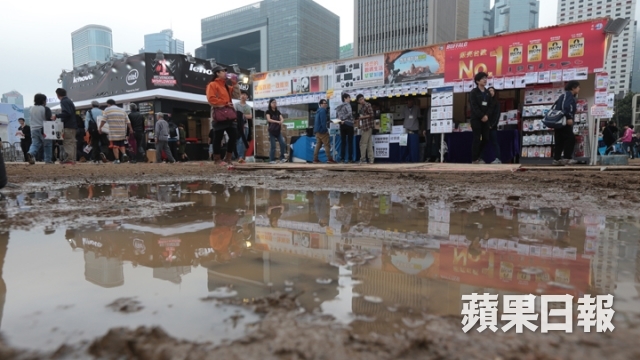 The 2015 Digital Life and Wine & Food Carnival was widely criticised for its poor planning and execution. Photo: Apple Daily.

We are also puzzled about the introduction of Eric Yeung Chuen-sing into the commission. One of his companies was awarded HK$1.3 million by the government to hold the Digital Life Carnival, combined with a Wine and Food Carnival, in April this year. Other than the questionable synergy between digital gadgets and wine, it was a dead-on-arrival event with exhibitors complaining about its disastrous planning and execution. If this is what the government expects from those who will be in charge of Hong Kong’s innovation and technology policy, we are in deep trouble.

Our expectation for an acceptable ITB proposal is straightforward: talk to the people. The chief executive shouldn’t always consult the same cronyistic circle that makes decisions which benefit the same coterie, rather than the whole science and technology sector and furthering the whole economy. Besides, you can hardly expect beneficiaries of the coterie, after enjoying paternalistic privileges for so long, to innovate out of their own boxes. The industry has a lot of ideas that can be channeled through our IT legislator, if only Leung would stop fighting and listen to the industry for once.

Peter Woo is an IT project manager who has been working in the banking and finance sector for more than 20 years.

Frontline Tech Workers is founded by a group of socially aware IT workers, who are committed to making use of their expertise to defend their sector and Hong Kong.

Why tech workers are opposing the government's IT Bureau proposal