Last week Chinese loggers were given life sentences in Myanmar (formerly known as Burma) for illegal logging in the border region between the two countries. In June, Indian Prime Minister Narendra Modi sent his country’s special forces into Myanmar to attack two militant camps, in retaliation for a series of deadly ambushes on Indian soil. The small country, only just opening up after decades of brutal military rule, is becoming a proxy battleground for two emerging Asian giants.

The Myanmar government wanted to be seen as tough on illegal Chinese activity in the country, because of internal grumbling about the influence of the big neighbor and regional hegemon. China has good relations with Myanmar’s military rulers, but after the generals hung up their uniforms in exchange for traditional Burmese garb the country opened up to the west.

Now China is trying to reassert itself in Myanmar, most recently by hosting the country’s grand dame of the democracy movement, Daw Aung San Suu Kyi, in Beijing. President Xi Jinping met the opposition leader personally, a unique honor for someone who is not a head of state or government leader. In exchange for the honor, Suu Kyi promised Beijing during pre-visit negotiations not to mention the human rights situation in China or call for the release of her fellow Nobel Laureate, Liu Xiabo. It was clear to everyone that China will remain a significant power player in Myanmar, no matter who rules in its mountain capital of Naypyidaw. 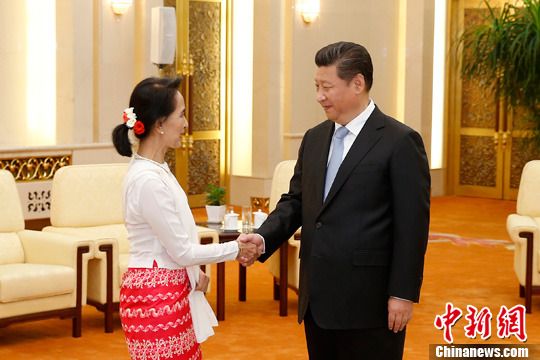 Meanwhile, Indian intelligence offered evidence that the rebels they chased into Myanmar had been using arms and supplies given to them by Beijing. The fragile Myanmar peace process, which is necessary for successful general elections to be held on November 8, is always in danger, but proxy battles between two Asian giants are definitely “not helpful”, as a British diplomat told HKFP.

The violence in the border region between India and Myanmar began when a militia that wants independence for the Naga people of India and Myanmar launched several attacks on Indian security forces from bases in Myanmar. One of these operations left eight members of India’s Assam Rifles paramilitary force dead in early May. A month later, 18 Indian soldiers were killed and 15 injured in an attack in India’s Manipur state.

The ensuing pursuit of the militants led Indian forces into Myanmar to carry out what New Delhi calls “pre-emptive raids based on credible and specific intelligence” about plans for further attacks on Indian territory. The raids were sanctioned by a 2010 agreement permitting Indian counterterror forces to enter Myanmar if they receive permission from the authorities. On this occasion the Burmese army was not directly involved in the raids. Officially it gave only political and intelligence support to the Indians, implying that the Naga militants did not break the truce it signed with the government of President Thein Sein in 2012 and it could therefore not help the Indians. 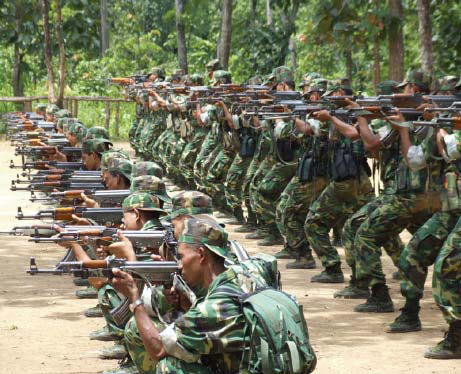 Militants in Manipur, India. Its people include the Nagas. Photo: Wikicommons.

The conflict with India had turned violent in March when this particular militant group joined an alliance with the United Liberation Front of Assam. The ULFA’s leader, Paresh Baruah, has found safe haven in the Chinese province of Yunnan and enjoys close ties with the Chinese People’s Liberation Army. Indian intelligence purportedly suspects that China has been discreetly pushing for cooperation among the region’s various militant groups. Beijing has dismissed these reports as “absurd”, and Chinese experts have pointed at the plight of the Naga people as the cause of the local attacks.

China has a history of meddling in the domestic affairs of its strategically located neighbor, more so than India. Throughout the 1970s and 1980s China backed the Communist Party of Burma, which fought an on-again-off-again insurrection against the Burmese army. Until recently China supplied the United Wa State Army, a militia active at the China-Burma border, with rifles, machine guns, armored vehicles and helicopters, helping turn this militant group into a de facto extra-territorial extension of the PLA. Diplomats in Myanmar suspect the Chinese have only increased their military support for militias in Myanmar after the country’s pro-China military junta stepped down and the country opened up to the West.

In February, fighting between the Myanmar army and Kokang rebels spilled over into China, when a bomb from a Myanmar plane landed on a sugar plantation on the Chinese side of the border, killing twelve workers. Mountainous Kokang is known for its strong bonds with China — local people speak a Chinese dialect, the Chinese RMB is the common currency and the conflict has tapped into long-standing nervousness in Myanmar about its giant northern neighbor, as the ethnic Burmese see the Kokang as a fifth column in the country, very similar to the way they regard the disenfranchised Rohingya Muslims in the north. In 2009 the Myanmar army had pushed Kokang rebels out of the country, but according to a spokesman in Naypyidaw the rebels have since found safe haven in Yunnan province in China, where local CCP officials have sheltered and resupplied them. 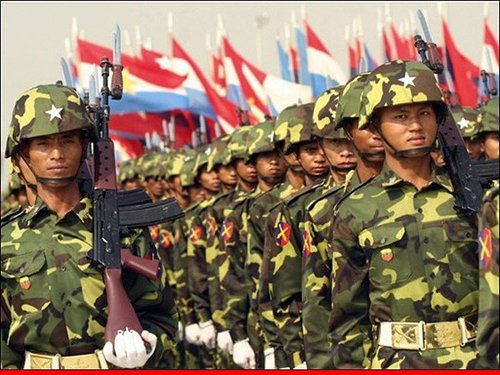 Maintaining a level of insurgency at India’s border with Burma would likely serve China’s interests. Both India and China are trying to develop ties with Southeast Asia. India has a flagship “Act East” policy, while China has its “One Belt, One Road” initiative, including infrastructure networks linking the greater Mekong region to landlocked Yunnan.

Myanmar is essential to China’s southwest passage to the Indian Ocean and it offers a continental alternative to the sea lines that run through the Malacca Strait and the turbulent South China Sea. January’s opening of a pipeline linking Myanmar’s Kyaukpyu deep-sea port to Kunming is of great strategic importance for China and a $20 billion railway line will soon follow the pipeline to bring Chinese goods to the Burmese market and beyond.

By keeping India occupied with insurgencies on its side of the Burmese border, China hopes to keep New Delhi at bay and regain some of the regional influence it has lost in recent years with Myanmar’s opening to the West. It has the added benefit of lowering expectations for the November 8 poll. Free and fair elections would probably make Daw Aung San Suu Kyi’s NDP the largest party, perhaps even with a majority. But even that outcome will not hurt Beijing very much, since it will remain an unstable country that will serve as a proxy battleground for the major Asian powers for a significant time to come.