Photos of a one-year-old drinking beer have caused a storm online amid what appears to be a growing trend of parents in China giving their children alcohol from a young age.

The most recent example of this to emerge on the Chinese internet is that of Tangtang, one year and seven months old, from Yubei District in Chongqing. 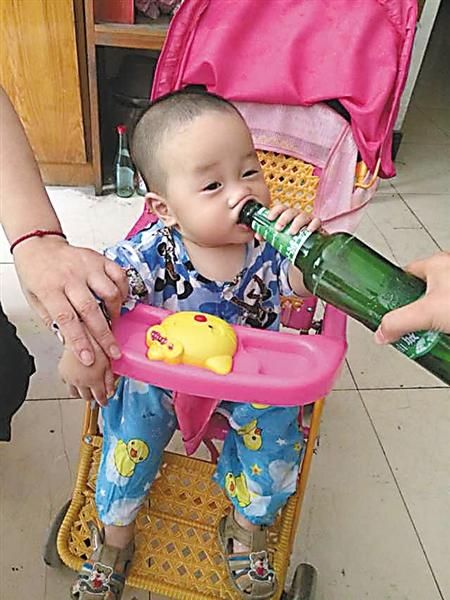 Tangtang, a one year and seven month-old toddler from Chongqing drinking beer straight from the bottle. Photo: China Daily News.

The child’s father, who was only identified as Mr Tang, told journalists that he gave Tangtang his first taste of beer at a family gathering last year by dipping a chopstick into a beer bottle and letting his son lick it.

Tang said he wanted his son to be able to handle his drink as he gets older so decided to train Tangtang from a young age. Now the tiny tippler reaches for the Tsingtao rather than the milk bottle.

A nutritionist quoted by local media said that children under the age of 12 should not drink alcohol as it could seriously affect development, particularly in the brain.

Earlier this year Apple Daily ran an article about the alarming trend of children under the age of 12 suffering from brain damage, epilepsy and even death as a result of being exposed to alcohol from a very early age.

Experts say that children’s livers are not mature enough to break down the enzymes found in alcohol, meaning that drinking from an early age could result in liver damage. Unsurprisingly, expert opinion has been known to discourage parents from plying young children with alcohol.