A police superintendent who allegedly assaulted pedestrians during last year’s Occupy protests has said that he used his baton to “pat” the back of a demonstrator to drive him away, according to an exclusive report by local newspaper Ming Pao. The police officer denies charges that he used excessive force against demonstrators.

In a testimony obtained by Ming Pao, superintendent Chu King-wai explained that he “unintentionally touched” two protesters with a baton in Mong Kok on November 26 at the height of last year’s Occupy protests.

Chu said the first instance was “purely an accident”. “The man was a core member among those who physically clashed with police officers. I did not intentionally hit him, but I admit that I might have touched him when I waved my baton,” Chu is quoted saying in the testimony.

In the second instance, Chu was filmed hitting a man on his neck from behind. The man, Osman Cheng, said that he was only “passing by” that evening.

In response to the video, the officer said, “It looks like I hit [Cheng] with a baton, but actually I only used the baton as an extension of my arm to pat on his back to drive him away.”

Chu said that if he had “intentionally” used a baton against Cheng, Cheng would have experienced a “shocking impact” and an “immediate fall” or some sort of injury, rather than the “normal reaction” seen in the footage.

A number of videos taken on November 26 appear to show that Chu used a baton against pedestrians without prior warning as part of the police operations to disperse crowds that gathered in Mong Kok.

In the testimony, Chu said he took out his baton “as a precaution” against people who were “hostile” with “active aggression” and who “resisted police action violently”. He said that other police officers also attempted to disperse the crowds with batons. The Independent Police Complaints Council (IPCC) has reportedly voted 12:6 in favour of substantiating Chu’s case of assault. But police have rejected the watchdog’s ruling and asked for another vote on the case.

Police have suggested Chu be charged with “unnecessary use of authority”, which is less serious than “assault”.

IPCC chairman Larry Kwok Lam-Kwong said, in an RTHK programme on Tuesday, that the council had not decided whether members would meet again to discuss the case. Members need to assess new documents submitted by the police and seek legal advice before voting again, Kwok added.

If the IPCC and police cannot agree on a ruling, the council needs to submit a report to Chief Executive Leung Chun-ying who will make a final decision on the case. 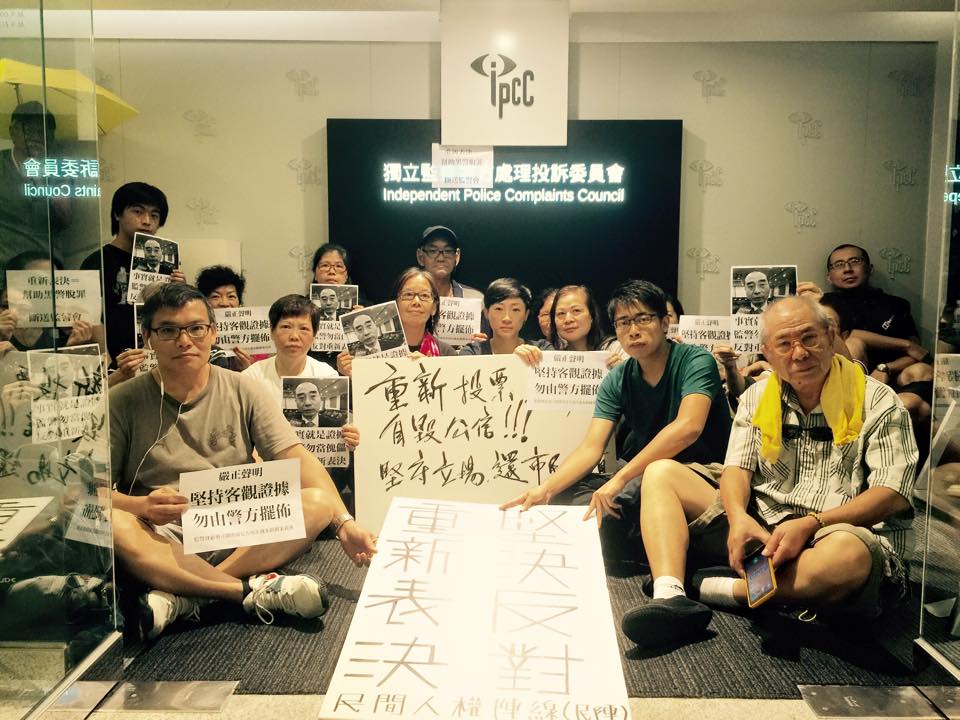 Osman Cheng said that the charge of “unnecessary use of authority” did not reflect the severity of Chu’s behavior, as the superintendent was filmed hitting Cheng and other pedestrians without warning.

Cheng said that he might consider private prosecution if police overturned the IPCC’s ruling.

Activists including barrister Tanya Chan protested at the IPCC office on Monday opposing another vote on Chu’s case. They warned that a new vote would harm the watchdog’s credibility.

Chu is a commander for the Sha Tin division, and is scheduled to retire this Thursday. He was charged with “unnecessary use of handcuffs” on journalists in a police operation to remove demonstrators at Chater Garden in 2002, according to local media. Police said that Chu would face disciplinary action at that time.

Video: The moment policeman accused of assault hit (or 'patted') protester with his baton