Hong Kong police have launched an investigation into a photobook of a six-year-old girl that sparked considerable debate at this year’s Hong Kong Book Fair.

Celine Yeung Hoi-ying is seen with her legs open with white underpants clearly visible in the photobook, entitled Childhood Times. A statement from Celine’s “guardian” released to local media on Saturday said that Celine’s mother felt “guilty and hurt” over “not being cautious enough” to review the photographs and allowing the publication of images that she herself finds “unacceptable.” Celine’s mother also promised to “examine her own actions” and ensure that she “better protects Celine in the future.”

Photographer and head of Popcorn Publishing Ltd. Roland Lam confirmed on Sunday that he had visited a police station to assist in the investigation, adding that “no suspicious items” had been found on his computer.

Lam also apologised to Celine’s parents, confirming in a statement that he did not seek their approval over the volume’s contents before it went to press.

Popcorn Publishing said on Friday that they were pulling the book from the shelves, although local media have reported that the book is still on sale at some 7-11 convenience stores. 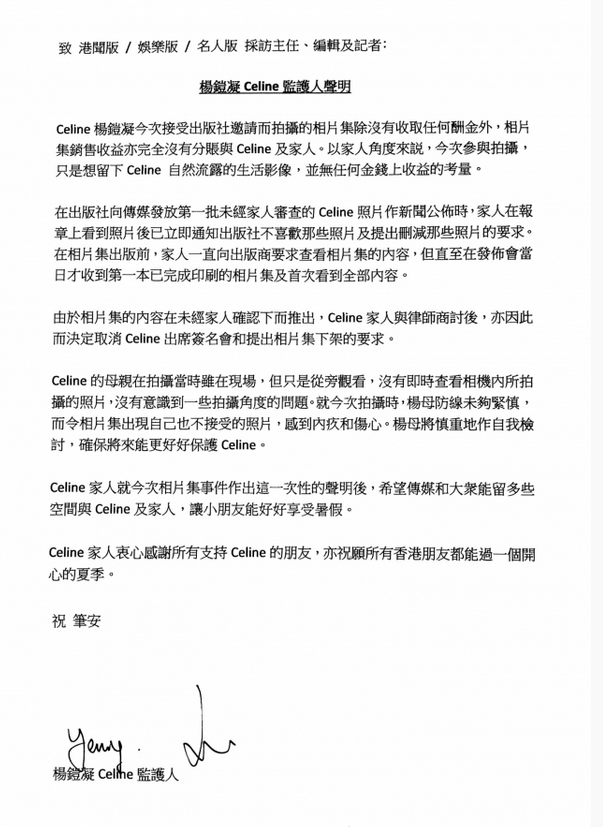 Statement from “Celine’s guardian” released to Chinese-language media on Saturday.

Yeung rose to fame after she appeared in TV advertisements for McDonald’s and Hello Kitty, filmed when she was only 3 years old. She recently appeared on the TVB series Every Step You Take.

HKFP has chosen not to publish the more controversial images from the book.