Several of Hong Kong’s top lawyers have launched a global petition in protest of China’s unprecedented crackdown on human rights lawyers and activists.

The petition, signed by 46 legal heavyweights from the Hong Kong Bar Association and chief executive election committee, denounces China’s “intimidating harassment” of more than 200 individuals in a nationwide crackdown that began on July 10.

The crackdown signals the Chinese Communist Party’s attempt to discredit the “Weiquan (rights defence) movement”, which has tried to promote civil rights through litigation and legal activism.

The petition urges the Chinese government to “uphold the rule of law” and “respect the constitutional rights” of the detained lawyers. It warns that the crackdown would have a “chilling effect on lawyers’ proper discharge of their duties”. “Only when lawyers’ professional duty and rights are respected can the rule of law as understood in the civilized world take root in mainland China,” the lawyers wrote in the petition.

All former chairpersons of the Bar Association since 1980, except Secretary for Justice Rimsky Yuen Kwok-keung and three judges, have signed the petition. 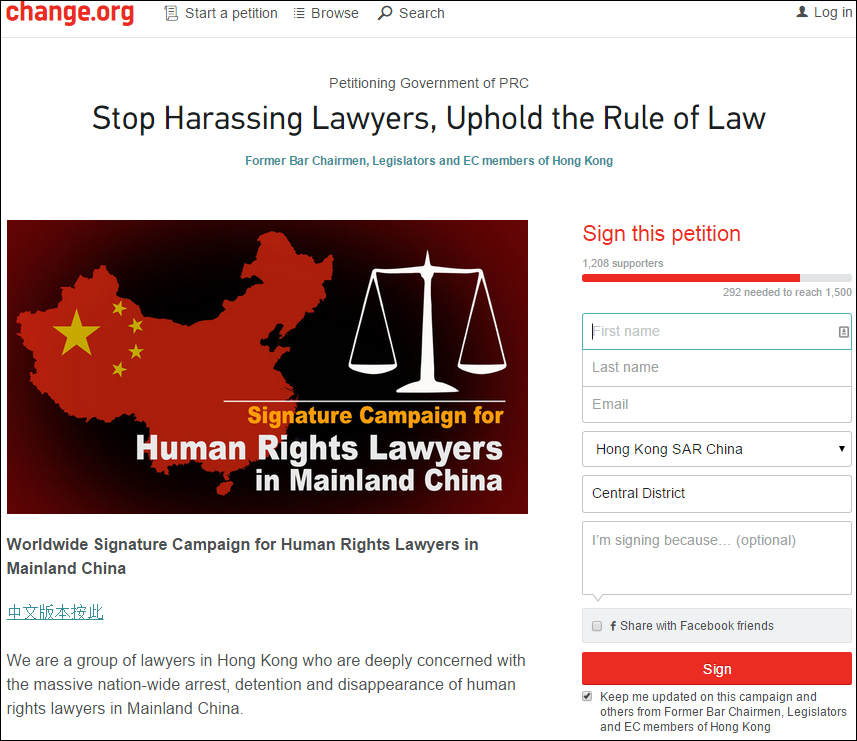 Civic Party leader and barrister Audrey Eu said that she would be inviting Yuen to sign the petition, because his position as Hong Kong’s justice chief could play an important role in calling on China to respect the rule of law.

The Department of Justice has said that Yuen will not join the campaign, since it is “inappropriate” for government officials to comment on or interfere with mainland China’s internal affairs.

Yuen was widely criticised for supporting Beijing’s controversial white paper on the Basic Law published in June 2014, saying that the document did not mean to interfere with Hong Kong’s judicial independence but instead respected its judiciary. Some of the detained lawyers in China.

The Hong Kong Bar Association issued a statement on Saturday voicing “deep concerns” over the large number of lawyers detained in mainland China. The association asked China to “respect the fundamental rights of legal professionals” and refrain from harassing and arresting them.

The United Nations, European Union, the French and Canadian governments as well as law societies in the UK and Australia have spoken out against China’s ongoing crackdown on human rights lawyers.

An article in the paper accused the detained lawyers, who “hyped up events and interfered with the judiciary”, of “trying to make themselves famous”.