Ary is 40 from Blitar in East Java. She has two kids. The first one is 24 years old. The second one is in his last year of high school. While the money is good in Hong Kong, it’s hard being away from her children.

It is domestic workers like Ary who participated in demonstrating in the Justice for Erwiana campaign with the Network of Indonesian Migrant Workers back in 2014. “Helping my comrades,” she said, “makes me happy.”

If Erwiana had to do it alone, she wouldn’t have won her case of abuse against her employer. Although largely invisible to the general public in Hong Kong, driving the campaign behind Erwiana was a group of extremely driven and resilient domestic workers. 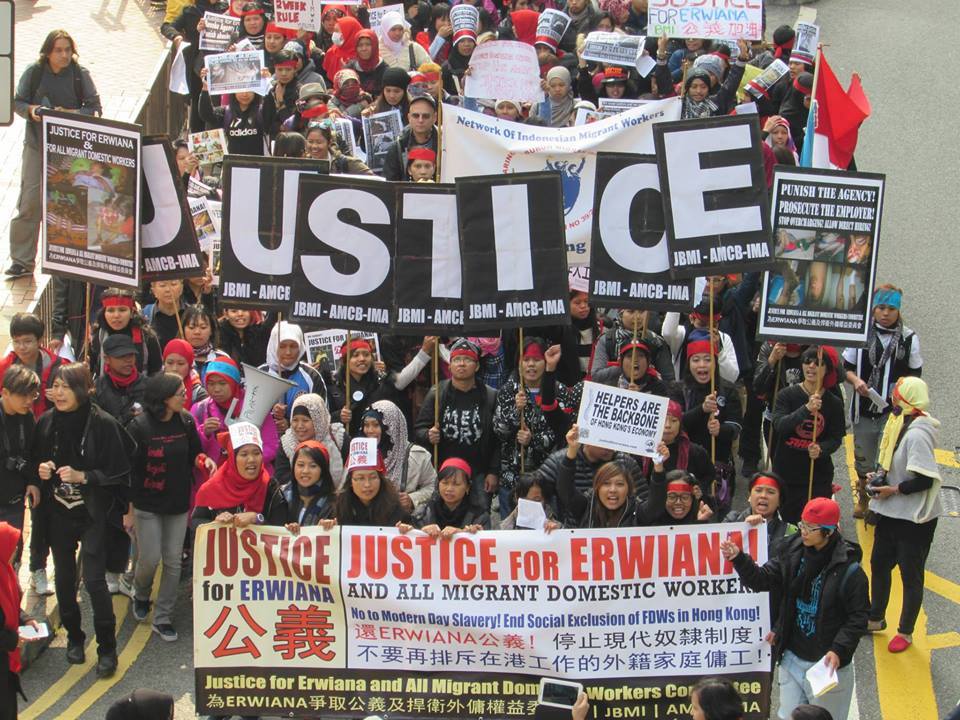 As an officially registered and recognised organisation founded in 1994 by domestic workers, the Indonesian Migrant Workers Union (IMWU) has continually supported and campaigned for Erwiana and other domestic workers for their rights.

Nevertheless, she always had a deep curiousity about other countries. She has worked for six months in Singapore, two years in Saudi Arabia, three years in Taiwan and is now entering her fourth year in Hong Kong.

Ary reflected, “In Singapore, time is money. In Saudi Arabia, the salary is low. In Taiwan, there is no holiday. But in Hong Kong, I’m finally free.”

Ary is “free” in terms of being a domestic worker because she lives alone in her employer’s residence. Her only job is to clean her employer’s place as the grandmother she was taking care of had passed away.

This situation is unlike those of most domestic workers who usually have to live-in with their employers and are often tasked with numerous chores from cleaning, cooking and taking care of children and elderly. 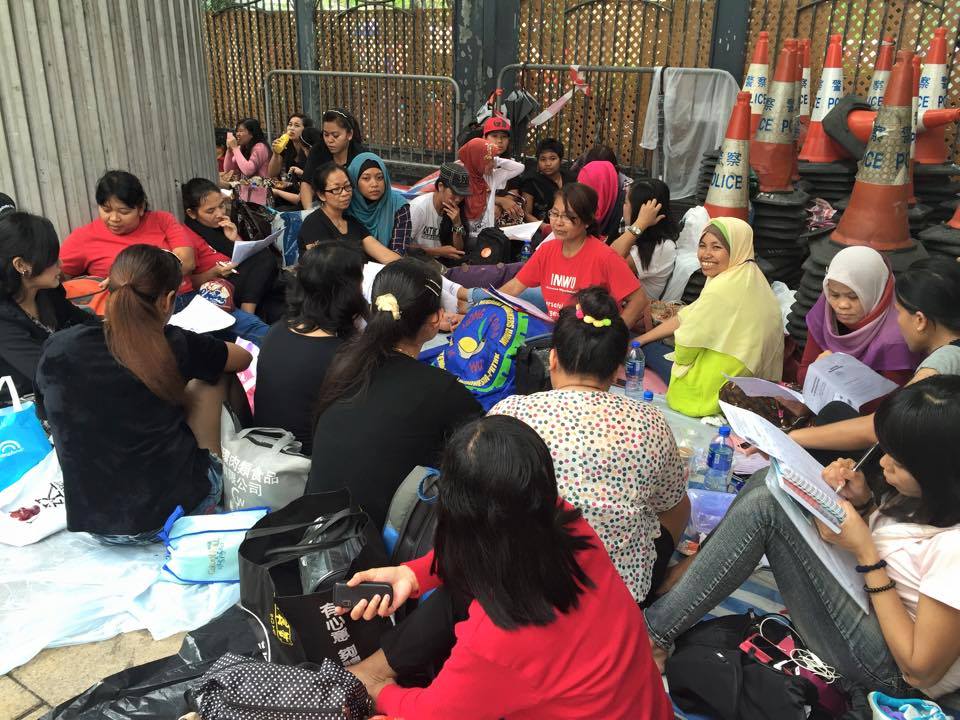 Since joining IMWU one year ago, Ary has devoted nearly all her free time to IMWU. Apart from being part of the nine-person executive committee of the Grass Field branch, she also coordinates skills training for other domestic workers on how to make toys and accessories.

Apart from IMWU providing a safe space for Ary to acquire and teach skills to other domestic workers, it has also exposed her to the various problems domestic workers face in Hong Kong. These range from labour issues as well as complaints and cases against employers. Every Sunday, these issues are discussed in Victoria Park.

I ventured into Victoria Park one hot and sunny day to attend IMWU’s activities. One branch had set up camp by the trees on the grass pitch equipped with microphones and amplifiers, rolls of plastic sheets as mats and snacks to share.

Ary, as my “interlocutor” for the day, made sure that I was introduced to everybody and even bought me bakso, an Indonesian beef ball noodle, amidst the roaring sun and cacophony of hawkers I found difficult to navigate. 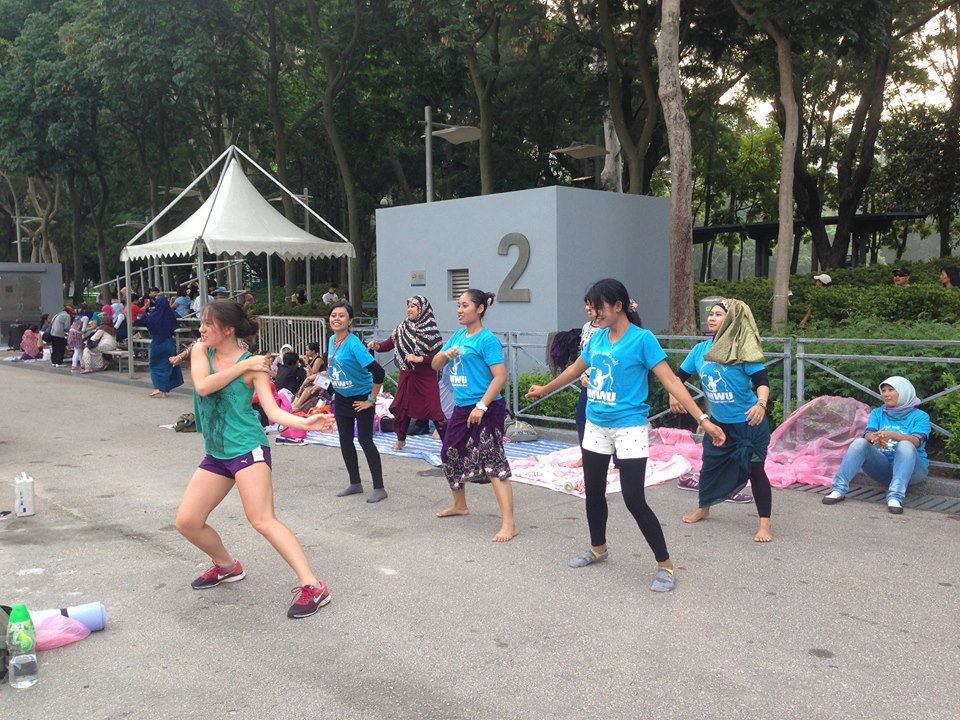 A dancing class held by volunteers from the Asia Pacific Mission for Migrants. Photo: Junko Asano.

Whether the activities were serious, like agenda meetings and passport discussions, or fun, like yoga and dancing, I found that there was a sense of shared understanding amongst IMWU members.

In part, what struck me throughout the day was how social and fun IMWU’s activities were. The community at IMWU reminded me of a warm village community marked by strong ties between each person. Everybody was making jokes, sharing food and calling each other “comrade” and “family”.

While the social and fun parts of IMWU may be considered superfluous to its goals, without it, IMWU would not be able to provide domestic workers with the all rounded support they need to deal with the often times harsh working conditions in their employers’ homes.

As an entirely grassroots organisation made up of domestic workers, IMWU has has played a tremendous role in terms of reaching out to younger domestic workers, who often have little experience navigating the bureaucratic procedures and market competition that enabled their migration. 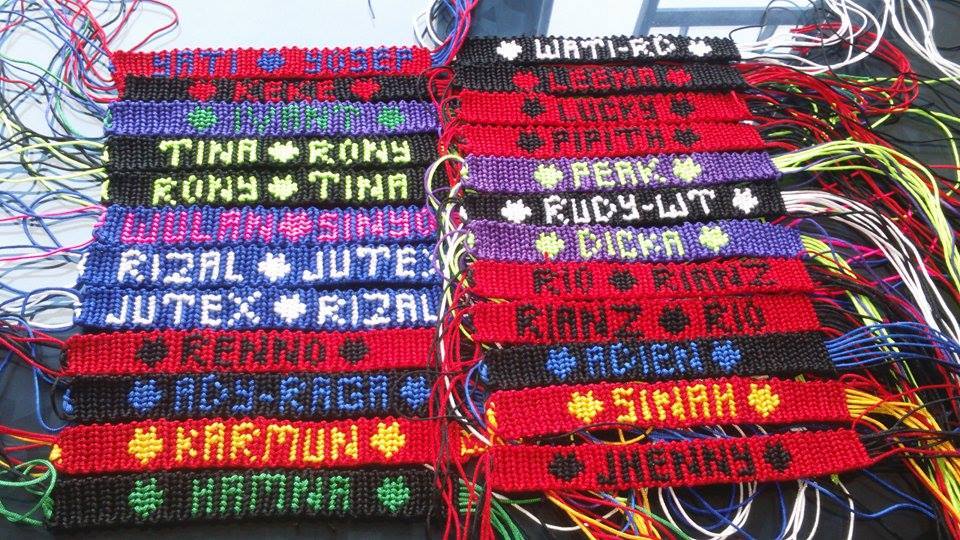 Simple things such as writing a standardised name for a passport and visa renewal applications may not be intuitive to newly arrived domestic workers. Indonesians often have multiple names from their village, parents and religion. It is also common to swap similar sounding letters like “f”, “p”, “v” and “w” in their names.

It is therefore newly arrived domestic workers, who do not possess such knowledge, that are most prone to abuse from employers and agents. New domestic workers often hail straight from villages with a low level of education and few experiences living in the city. Working in Hong Kong can be an overwhelming experience for many.

As the first point of contact, IMWU provides new domestic workers a welcoming environment, current workers, a social group and an organisation to pursue personal development, and aggrieved workers, an institutional and social support group to launch complaints and cases against employers.

A day with a domestic worker union: 'We have to be brave, not ruled by abuse'