Hong Kong’s Mandatory Provident Fund (MPF) scheme has long been the laughing stock of those criticizing the city’s labour welfare policies.  Few workers are under the illusion that their monthly contributions of $1000 or so will yield adequate income for retirement in one of the world’s costliest metropolises.  The investment performance of MPF products has also been the source of much grievance, and it is not uncommon to overhear water cooler conversations about stale or shrinking MPF portfolios.  Many individuals lack the time and financial know-how to scrutinize the thick deck of performance and disclosure mumbo-jumbo that their MPF provider sends out every year.  Is the negative vibe around MPF just cynicism, and if not, exactly how lousy are these pension products? MPF funds: The Not-So-Good, the Bad, and the Really Ugly

The key to evaluating investment performance is benchmarking.  When one describes an investment product as “outperforming” or “underperforming”, what is the reference point for comparison?  Money stashed under the mattress?  A product that makes money is not necessarily an outperformer.  Suppose a portfolio of Hong Kong stocks gained 30% in one year.  Sounds impressive, but what if the Hang Seng returned 50% that same year, as it did in 2009?  The portfolio actually underperformed; it could have made more money simply holding the stocks in the Hang Seng Index (that list of stocks is public information).  Choosing an appropriate benchmark index is therefore crucial.  Indexes are not simply barometers of market sentiment, they also serve as objective performance gauges.

Digression aside, from the Fidelity web site, one learns that the MPF product mentioned previously invests primarily in stocks from markets around the world, and at present holds just a few percent in bonds.  A suitable benchmark would be the MSCI World Index, a benchmark of global stocks that is almost a de-facto standard among investment practitioners.  How does the Fidelity Growth Fund fare against this benchmark index? 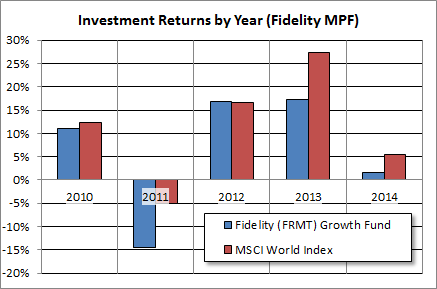 Not much of a winner.  The Fidelity fund only managed to beat the benchmark once in the past five years.  In 2012, it returned 16.74% compared with benchmark‘s 16.54%, a meager 0.20% of outperformance.  But wait – Fidelity charges a hefty 1.53% fee every year – wiping out that gain!  With such an atrocious track record, this is considered the best product on the market?  One cannot help but wonder how bad its peers are.

The awards cited above were issued by MPF Ratings Limited, who presented another “Longevity Award” to the Invesco Strategic MPF Scheme Growth Fund.  Seems like everyone gets an award for something!  (There are twenty-seven winners in total)  Like its Fidelity counterpart, the Invesco MPF fund invests in stocks globally, so once again we compare its returns to the popular MSCI World Index: 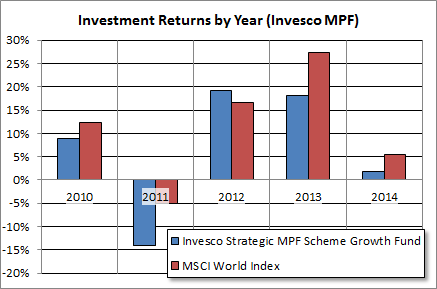 What a farce.  Outperformance only one-fifth of the time (or rather, picking the wrong stocks four times out of five) gets an award.  The award should have been renamed to “Nice Try!”  The Invesco fund’s claim to fame was having beat the market in 2012, but missed the mark by a long shot in 2013, and more than doubled the market’s losses in 2011.  Decent retirement options are more difficult to find than mushrooms in a manure pile!

Let us look at yet another award winner, the Haitong MPF Hong Kong SAR Fund, recipient of the “Best 10 Year Performance – Equity Fund HK & China”.  It comes with a punchy mandate – to “provide investors with growth potential through exposure to Hong Kong equities.”  Haitong’s online documentation does not show ten of performance figures, but at least they are honest enough to show comparisons versus their benchmark (the Hang Seng Index), which puts their MPF fund to shame: 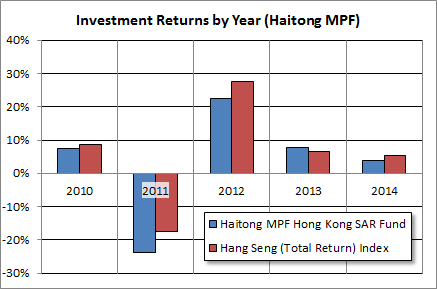 No surprises here: outperformance in only one out of five years (no outperformance at all if you count their 1.33% annual fee).  Over this entire period, the Hang Seng Index accumulated 28.50% in gains but for those unfortunate enough to have Haitong managing their retirement savings, only 11.76% was made.

The Manulife MPF Healthcare Fund boasts a long list of accolades : “Best 1 Year Performance” from MPF Ratings in 2015, and “Best in Class” from Benchmark Magazine and Bloomberg BusinessWeek/Chinese Top Fund Awards in 2014.  Like its name suggests, the fund invests in shares of companies in sectors like pharmaceuticals, health care, and biotechnology, returning a respectable 17.69% in 2014.  On the other hand, health care stocks around the world, on average, rose 18.70% in 2014, according to the MSCI World Health Care Index.  Once again, picking an appropriate reference index for performance comparison is vital.  The portfolio managers at Manulife will be quick to point out that their fund earned a whopping 31.62% in 2013.  Our retort?  The index gained 37.06% the same year.  Not to mention 2011, when Manulife completely flopped. 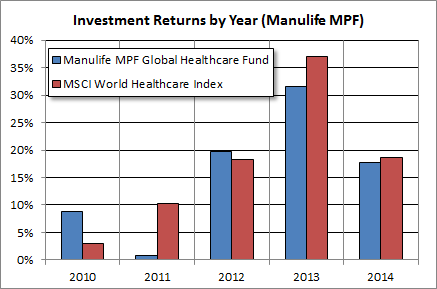 The picture could not be more obvious.  Hong Kong’s MPF schemes have become no more than a bad joke.  To label the current MPF investment options as mediocre or lacklustre would be a generous overstatement.  As we have shown, even products with best-this, best-that titles (just industry participants looking for a chance to wine and dine by showering each other with awards) are often persistent underperformers.  Unfortunately, most workers – blue collar types whose savings the MPF programme was originally designed to protect – are unlikely to possess the financial sophistication required to understand and research performance metrics, so the sheer extent and prevalence of appalling MPF returns has seldom been documented and discussed.

Several weeks ago, a fellow reader commented on an HKFP article, challenging the author’s claim that the HKSAR government is “pro-business”.  Hong Kong’s MPF is a perfect example of the entrenched cronyism between policymakers and the private sector.  Billions of dollars are funneled every year from workers’ pockets into the portfolios of money managers who are blatantly flouting their fiduciary duty as agents tasked with managing other people’s savings, facilitated by regulators who turn a blind eye to shoddy performance and excessive fees.

Hong Kong Free Press reached out Haitong, Manulife, Fidelity and Invesco regarding their MPF programmes. However, none provided any comment.

MPF funds: The not-so-good, the bad, and the really ugly