There is always something for everyone at the Hong Kong book fair, but this year’s hottest selling items are educational books for kids.

According to Apple Daily, parents spent up to HK$50,000 on educational books for kids on the opening day of the annual book fair, with English-language books the most popular… and expensive. According to the newspaper, the most popular English-language books on sale were Oxford University Press’s Oxford Path series and Disney’s World of American English (DWE).

However, some have raised concerns about the cost of educational books. Lawmaker Claudia Mo from the Civic party, who had a stand at the book fair, told the newspaper that parents should be leading by example and spending more time with their children on learning English instead of buying them expensive books.

Apple Daily reported that DWE’s starter edition will set parents back HK$20,000. A set of Oxford Path books – which includes smart pens, colouring books and CDs – can cost an eye-watering HK$23,800 to HK$48,000.

But despite the cost, money is not an issue for some parents. One parent who spoke to the newspaper said she wanted her child to be confident with the English exercises and it doesn’t matter how much the books cost. Another parent said that money was not a problem as long as her children were interested in reading. 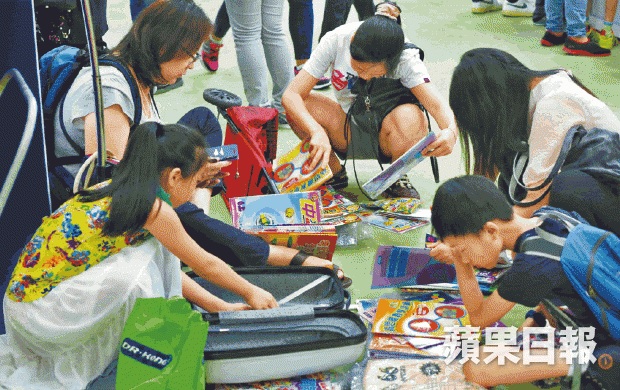 Hong Kong consistently ranks highly in international education league tables for having some of the world’s smartest students. In the 2012 PISA rankings – the Programme for International Student Assessment – Hong Kong came third behind Shanghai and Singapore. However, critics have argued over the years that the city’s education system puts too much pressure on its students, who have to attend extra classes or tutorial schools to stand a good chance of getting into a good school or university.

Last month, a survey by the territory’s largest teaching union revealed that 65 percent of teachers felt the Territory-wide Assessment – a government test used to track pupils’ progress in primary schools – should be abolished because it put too much pressure on students and teachers. The survey also found that 97 percent of primary school teachers were required to buy practice exercises for the exam and pupils preparing for the exam buy three practice exercises on average.

Another survey by the Hong Kong Federation of Youth Groups revealed that 80 percent of the city’s primary school pupils had applied to do more extra-curricular activities during the summer holidays, and that 45 percent of students had to finish at least five summer workbooks before the holiday break ends.