Hong Kong’s equality watchdog has publicly responded to complaints made after the president of the Legislative Council repeated a racist joke.

The Equal Opportunities Commission made the comments after the Refugee Union sent a formal complaint to the commission regarding Jasper Tsang’s comments about clearing pro-democracy protesters from the street by encouraging Africans from Chungking Mansions to go down to the Occupy camp site with the bonus of free food. The Refugee Union sent a formal complaint to the EOC saying they were “greatly concerned” by Tsang’s comments and called on him to apologise and retract his comments.

In a letter addressed to the Refugee Union, the EOC said: “The Commission is of the view that anyone making comments in public on race related issues, whether in conversation or in jest, should be sensitive to the feelings of others to avoid any unnecessary misunderstanding.”

The EOC also included in their response a newspaper clipping of an article published on Saturday in July 4 in the Hong Kong Economic Journal, which had the same statement published in Chinese. The HKEJ article was published four days before the NGO sent their complaint. 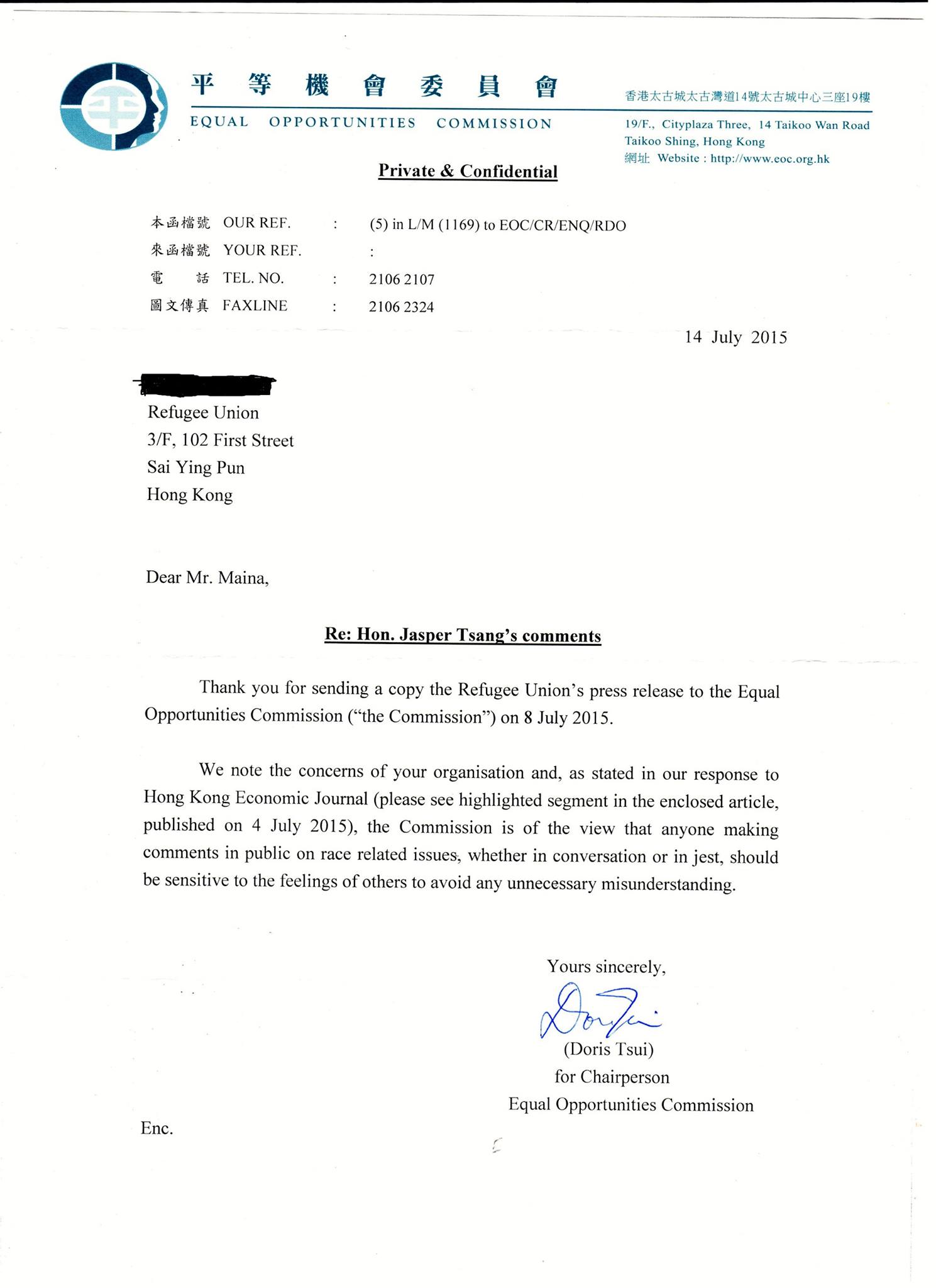 A spokesperson for the Refugee Union  told HKFP he did not read the attached article because he can’t understand Chinese and would have wanted someone to translate the article for him.

“We did a complaint because we thought it was not for [Tsang] to make such a comment in a very casual manner and we were very offended, it was very embarrassing to hear somebody like him talking about or implying that you can use other people to send other people out [of the protest sites].”

He added: “I would also want him to resign, because as someone in leadership who is supposed to lead, someone who is formulating policy for the government… if that’s the kind of mentality that he has, it just shows that we have a long way to go.”

Tsang made the comments during a speech at the University of Hong Kong’s St John’s College.  In an email to HKFP, Tsang said “there was no racism intended in any remark I made on that occasion.”

Last week, the Refugee Union issued a statement condemning Tsang’s comments and called on the LegCo president to retract his comments. The NGO also used the press release to criticise the government’s Unified Screening Mechanism, the system used to screen asylum seekers looking for refuge in Hong Kong.

The USM was introduced in March 2014, but has been criticised by NGOs and human rights advocates for being slow and doing very little to help refugees.