Protesters who smashed into the Legislative Council building during last year’s pro-democracy Occupy protests have each been sentenced to 150 hours of community service.

The four protesters – Cheng Yeung, Tai Chi-shing, Cheung Chi-pong and Shek Ka-fai, aged between 18 and 24 – previously pleaded guilty to criminal damage and unlawful assembly. On Monday, they agreed to serve the community service and pay court costs of HK$500 each at the Eastern Magistrate Courts in Sai Wan Ho. 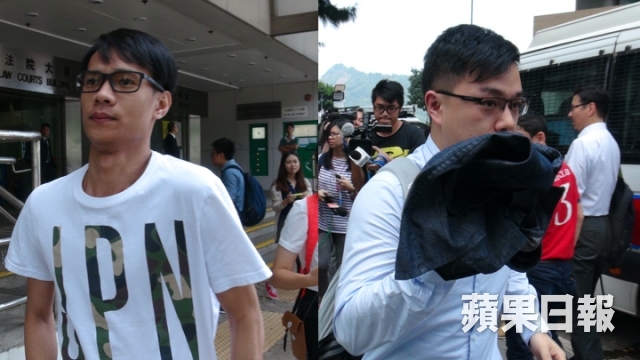 Principal magistrate Bina Chainrai refused the prosecution’s request that the accused pay a total amount of almost HK$587,000 in reparations, saying that the prosecutor’s report failed to illustrate the value of the destroyed items.

She suggested the prosecutor commence civil proceedings instead if they wish to receive compensation through the court. The four were among numerous protesters who gathered outside the legislature in November in response to a false rumour that an “Internet Article 23” bill would be passed that day. The rumoured ordinance proposed to regulate internet use in the territory and potentially criminalise popular online parodies.

The incident was also seen as an attempt to escalate the stagnant Occupy movement, thereby applying more pressure upon the government. The move was met with disapproval by the majority of protesters, earning condemnation from pan-democrats and student groups.

Although Labour Party vice-chairman Fernando Cheung Chiu-hung attempted to persuade protesters to leave the scene, he was dismissed immediately. The accused used metal barricades and bricks to break the building’s glass doors, making way for dozens of protesters to enter the LegCo complex.

The event was a turning point for the pro-democracy movement, precipitating a split between mainstream pan-democrats and those pressing for more forceful forms of protest.

Correction: A previous version of this article stated the prosecution requested that the accused pay almost HK$587,000 each in reparations, as opposed to in total.