Chief Executive Leung Chun-ying has said that Hong Kong needs a “new cooperative relationship” between the executive and the legislature, and has offered to cater to pan-democrats’ choice of breakfast when they meet.

At his quarterly Q&A session on Thursday morning, Leung said that the Hong Kong government would like to see more “cooperation” from legislators. In response to some pan-democrats’ ongoing campaign of non-cooperation, the chief executive said that he and the government “have only ever asked for cooperation.”

Leung added he was open to having breakfast with pan-democrats, and was prepared to entertain their various meal preferences at Government House. “If [the legislators] want sausage and eggs instead of the pre-arranged Chinese-style breakfast, that’s fine as well,” he said.

In what was his fourth and final Q&A session of the Legislative Council year, Leung repeatedly criticised the practice of filibustering: “Even if legislators reject a motion, this is acceptable as it is part of the democratic process. However, if a motion could otherwise have been passed, it would be unacceptable to use methods like filibustering to hinder the administration’s fulfillment of its promises to the Hong Kong people.” Chief Executive Leung Chun-ying at a ceremony for 18th Anniversary of the HKSAR . Photo: GovHK

The chief executive also urged the legislature to pass the establishment of the controversial Innovation and Technology Bureau, which he said had already been delayed for three years. Leung said, “No Hong Kong resident would believe that after three years of discussion, the government has yet to fully answer legislators’ questions.”

Legislator Dennis Kwok of the Civic Party asked whether Leung should be held responsible for the mistrust between the executive and the legislature.

Leung denied the suggestion and said that the mistrust could be traced back to Hong Kong’s first SAR administration. He declined to answer Kwok on whether he would promise not to run for chief executive in 2017. Leung said that Kwok’s question was invalid because the premise of his question was “not in accordance with the Basic Law and the political reality of the past 18 years.”

Economic and livelihood issues will also be a focus for the government over the next two years. In particular, the government will conduct a public hygiene drive led by Chief Secretary Carrie Lam in August and September. 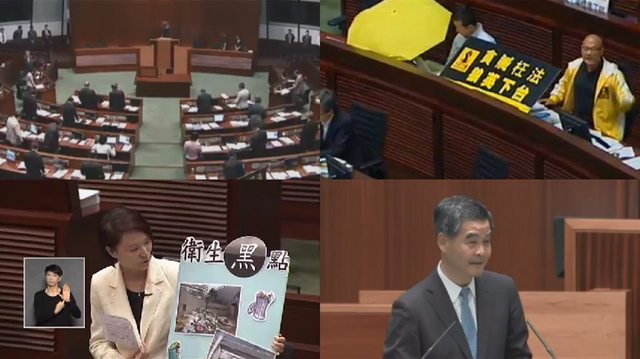 Since legislators who have asked fewer questions in the previous Q&A sessions are given priority, only three pan-democratic lawmakers were able to speak.

During the session, League of Social Democrats legislator Leung Kwok-hung was ejected from the chamber after he disrupted proceedings.

Civic Party legislator Kenneth Chan Ka-lok also left the chambers during the session. Chan called the Q&A session a “complete waste of time [with] a bunch of rubbish [pro-establishment legislators] causing a ruckus in order to protect their master.”

Pro-Beijing legislators also expressed their dissatisfaction with pan-democrats, questioning the conduct of some legislators who yelled at the chief executive.