The Chinese economy is now facing its strongest challenges for a generation and Xi Jinping’s best efforts to create a nationalistic, shareholder, last stand for the stock market seem to have largely failed. What the fall out from this will be we can only speculate, but the enormous economic disaster that is the Chinese economy is not of Hong Kong’s making. Back in the colonial days, if the British economy collapsed, Hong Kong would not be expected to fall on its sword in sympathy. Likewise, given the stormy times ahead for China, Hong Kongers should not be looking at going down with the sinking ship, but instead working on preserving what makes the city different, or the Two Systems part of the Basic Law. Given this, the idea of a Hong Kong City State, that can buffer itself from China becomes increasingly more viable and appealing.

The impracticalities of a Hong Kong City State are often premised on the geopolitics of Asia remaining similar to what it has been for the last 30 years. But once you accept the premise that the geopolitics of Asia are heading into turbulent seas, then the question of how Hong Kong can best batten down the hatches and survive the storm becomes much more pertinent and pressing. More independence and autonomy, and not less, suddenly become compelling. Protesters held the British colonial flag, which is associated with Hong Kong independence movement, during a protest in Mongkok. Photo: Arthur Lo.

When you live in the shadow, of the overly jealous and malign CCP, even uttering the word independence under your breath is high treason against The Party. Certainly, there are significant amounts of people who believe the independence debate in Hong Kong was created by the CCP to create social division within the democratic movement and brand everyone who opposes the government as splitists. In China, there can be no worse a traitor than a splitist. However, most of the anti-independence arguments are actually ill-thought out if we work back from 2047. For, when we look at the pros and cons of more independence based on 2047 as a starting point, it starts to make a lot of sense and a much smarter path to follow than blithely accepting whatever bones the CCP wishes to throw Hong Kong erstwhile its own economy and political system rips itself apart.

It’s not too early to ask the question, what will happen come 2047? Does Hong Kong law become superseded by Mainland law? Because if that’s going to be the case, the day this is officially announced, whether it be tomorrow or in ten years time, will be like pulling a plug on the city. Money, resources and people will stampede to safer havens. Those that faithfully pledge their full allegiance to The Party, will be left in a hollow shell of a city as anything that creates real, global value will be gone.

If your argument against greater Hong Kong independence is that Hong Kong’s unchangeable destiny is to eventually be fully assimilated into the CCP’s vision of China and become a carbon copy of any other CCP city then you must first be clear what these other cities will look like in five years time, or even five months time! Simply pointing out that we need to be more like ‘them’, but having no clue what ‘them’ will look like in the years to come and having zero control of how ‘they’ are created is no plan at all. 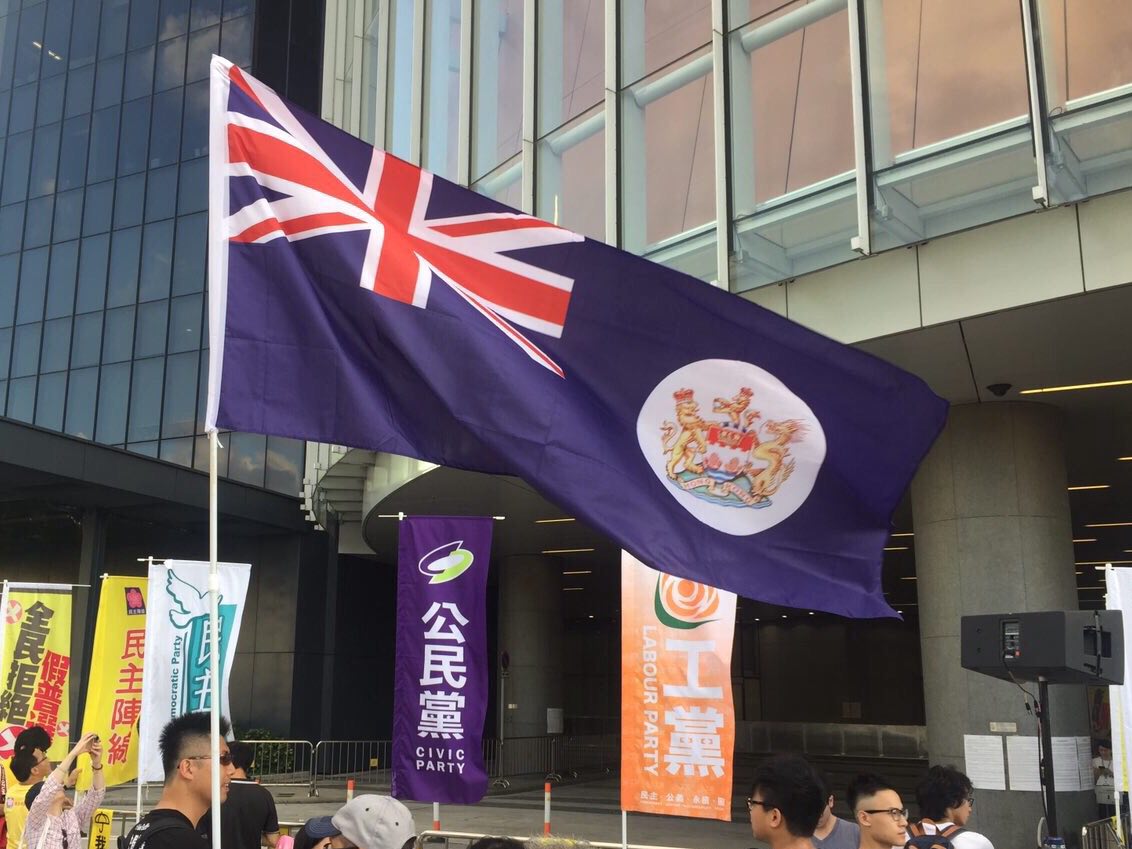 A protester held the British colonial flag in a protest outside the LegCo. Photo: Eric Cheung.

Hong Kong certainly has all the tools to make a positive contribution to the historical place known as China for many years to come. The same can’t be said of the multitude of cites we’re supposed to be more like, and that includes Shanghai. The most likely future for these cities are astronomically high, local debts, huge environmental clean-up bills, violent, social unrest and rampant corruption. None of which Hong Kong suffers from, yet. Hong Kong has everything it needs to protect itself from such a bleak future, but unfortunately the current government seems intent on throwing away all the city’s global advantages in a lame attempt to show loyalty to a broken political part that pretends its a country.

No one who advocates greater independence is dreaming that Hong Kong isn’t part of China in a physical sense, but being geographically part of a continent and being ruined by the politically oppressive CCP are not one-in-the-same. The CCP is not China, it is not the country, neither is it the people. It is a shadowy, political organisation with a horrific track record for wreaking havoc upon the peoples of China throughout its very short and violent tenure.

There will come a time when the CCP no longer holds power, but there will still be a China and also city in its south called Hong Kong. This is what the independence debate is based on, a practical approach to preservation, and there’s a lot to be protected here in this quasi-City State. This is the true pragmatic path for Hong Kongers now, or how does Hong Kong negotiate the impending disaster that is the CCP’s complete loss of trust in China and not be destroyed with it? Does Hong Kong go down with the CCP, or attempt to preserve what has always made it so unique?

Currently the CCP tirelessly tries to bewitch pragmatists in Hong Kong with the narrative that the only future lies with them, a transient and decaying political entity, motivated by self-preservation and quick gain. However this lie becomes increasingly less convincing with every passing week. Hong Kongers are no stranger in handling inept northern governments. They have played this game for almost two centuries and they know when the winds of change howl, and China looks like a shaky pile of eggs (危如累卵 – Wei Ru Lei Luan), their future lies in protecting their own autonomy and not integrating more into turmoil.