Can we discuss the elephant in the room? It might be thought that the elephant appears in the shape of the extraordinary idea that cosmopolitan Hong Kong should try catching up with the rest of the world by ending discrimination against same sex marriage or maybe we could even be getting on with legislation to ban discrimination on the basis of sexual orientation.

However this is not the case as the real elephant is the extraordinary power of Christian groups who seem to hold a vice-like grip on thwarting proposals to introduce socially progressive legislation.

They have not only succeeded in pushing all talk of legally recognized same sex partnerships into the long grass but have also thwarted legislation that would outlaw discrimination on the basis of sexual orientation.

The most vociferous of the Christian groups is the Society for Truth and Light but in the background are high-ranking officials who carefully conceal their hostility to anything that smacks of progressive social legislation yet have the means to ensure that Hong Kong remains in the backwaters. Although most Hong Kong people have a loose association with either Taoism or Buddhism, they tend not to be religious in the sense that the Christian churches expect of their adherents. However due to the proliferation of Christian-run elite schools in Hong Kong, their graduates occupy a disproportionately high number of top jobs in the SAR. This especially applies in the upper echelons of the civil service.

The schools and churches that count these influential people as members tend to have been immune from the reforming social wind blowing through the Christian community, a wind that has even started to tickle through the Vatican’s corridors.

Hong Kong, by and large, has old style Christianity, insisting on literal interpretations of the Bible and displaying considerable hostility to social change, especially in the arena of same sex matters. There are however parts of the Christian community who have shown themselves to be more open-minded.

No one should be demonized for their faith but when people of faith seek to demonize and perpetuate prejudice against others this becomes a problem. When evangelical views combine with the puritanism of a Communist Party that rules China we are in real trouble. At times this combination is laughable, as was seen when the state-run Global Times pronounced that the recent US Supreme Court decision legalizing same sex marriages was a license to persuade people to change their sexual orientation. However the persecution of bi, gay, lesbian and transgender people on the Mainland is no joke.

Hongkongers tend to be more tolerant and opinion poll evidence shows a relaxed response to reforms that would give same sex couples equal rights with everyone else. 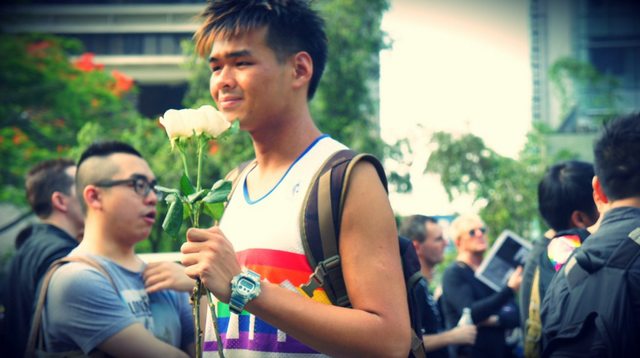 As matters stand, and a case currently before the courts demonstrates, this lack of rights is causing problems for same sex couples who come to work in Hong Kong.  This, at least, is out in the open, but what happens to LGBT people who, for example, work in the civil service and have to be careful to hide their sexuality if their job prospects are not to be jeopardized? And what about the heart-rending stories of same sex couples being denied hospital visiting rights and funeral observation rights?

And there is more, some of it petty but some not so petty but it all amounts to Hong Kong being stuck discussing forms of equality that are taken for granted in most advanced societies. It is quite true that when these rights were given they proved to be highly controversial, as is the case in the United States right now, but experience from other countries ranging from South Africa to Britain to Brazil is that following new laws acceptance flowed at a rapid pace and people were left scratching their heads as to why it was ever controversial. Asia’s so-called World City has a problem in lagging so far behind.