Protesters ranging from a fifth grader demanding universal suffrage to a 77-year old who has attended every rally since the handover filled the streets on July 1.

Sporting yellow ribbons, this is the third time Theodore (right) and his father attended the rally together. “I think it’s important that people unite and walk together so we can achieve true democracy together. While less people turned up this year, I still came because I demand true universal suffrage.” Chung (with microphone) attended the rally on behalf of Nutong Xueshe, a group aiming to raise awareness of LGBTQ issues. “I demand legislation protecting the rights of same-sex couples, and also for [Chief Executive] Leung Chun-ying to pay attention to LGBTQ rights,” he said. 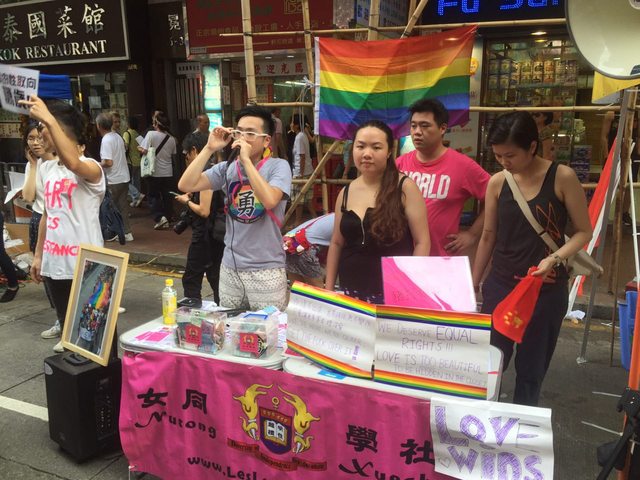 Lau, seen with a mask of legislator Lau Wong-fat said he is here on behalf of a group of netizens to “condemn those who did not cast their vote for the political reform.” At the same time, Lau also thanks the pro-establishment lawmakers for saving Hong Kong “in a twisted way” by leaving the legislature at the recent farce. Lau is part of Keyboard Frontline, an online platform defending internet freedom. Chong decided to attend the rally because she thinks Hong Kongers “did not win anything yet.” She said: “While the reform is vetoed, it only means we didn’t lose. We demand universal suffrage as provided by the Basic Law.” Chong said she was not disappointed with the turnout this year. “I understand that people have families to attend to and wish to rest on a public holiday. But when I have the strength to join the rally and unresolved problems are in place, I will still continue to take part in the march.”

She said that she would focus on restarting the political reform package for chief executive elections rather than amending the Basic Law, one of the demands in this year’s rally. Cheung has been attending the July 1 rally since its inception in 1997. Offering his views on the 2017 election, he said: “400 people elected Tung Chee-hwa, 800 elected Donald Tsang and 1,200 elected the big liar Leung Chun-ying. Now we reach 2017 and it still stays at 1,200. Is this a great leap forward or backwards? I think it’s obvious.”

He was also proud of Hong Kongers’ calm behaviour in protests. “From June 4 [candlelight vigil] to July 1 to the Umbrella Movement, there is no other place in the world that show such peacefulness. It is ridiculous that the police are exerting violence to our residents. Because of this, I think it is important for us to attend the rally and voice out,” he said.