This live blog has been archived – click here for part 2. 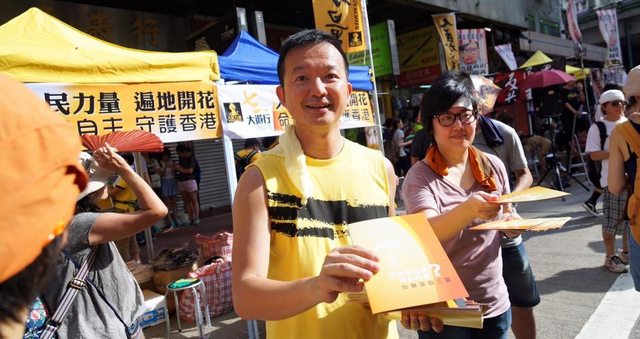 4:28pm – Media mogul Jimmy Lai had spoken to RTHK, denying rumours of Apple Daily close down its print edition. He says that he still has faith in that the political reform process will be restarted.

4:25pm – Sporting yellow ribbons, it is the third time Theodore Chan, 11, and his father have attended the July 1st rally together. “I think it’s important that people unite and walk together. Through uniting, we can achieve true democracy together”, Theodore told HKFP. 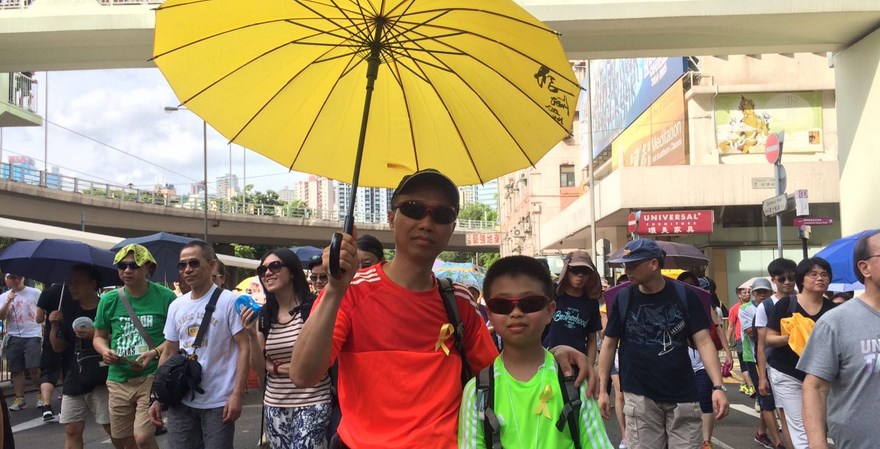 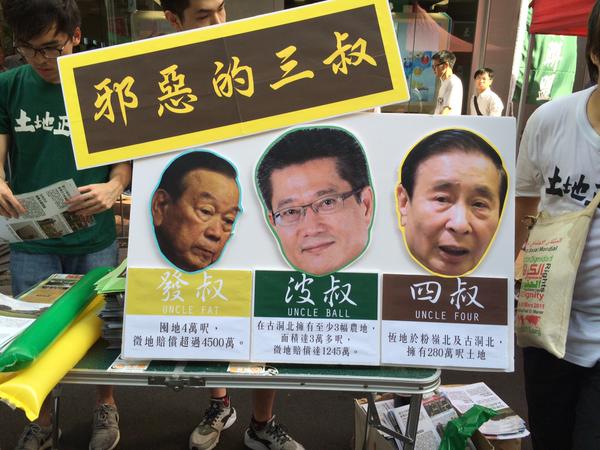 4:10pm – Shouts of “give way!” rise from the Scholarism booth, where marchers say a few young activists have been surrounded by around 20 police, as well as Criminal Investigation Division officers. Joshua Wong and Oscar Lai are on stage. 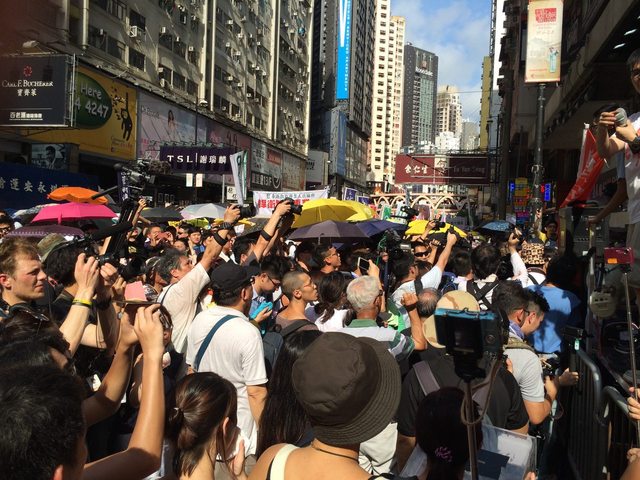 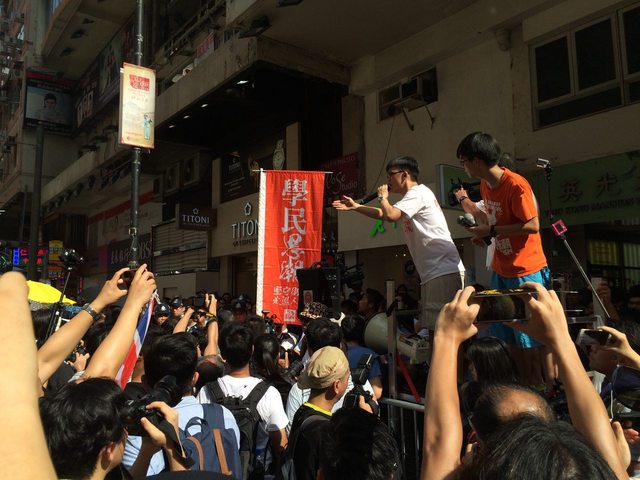 4:05pm – Founded last year, the Self-Determination Party of Tibet and Hong Kong promotes independence for both Hong Kongers and Tibetans. “We’re advocating for Hong Kong nationalism. We want to build an ideal society that belongs to Hong Kongers,” said the group organiser. 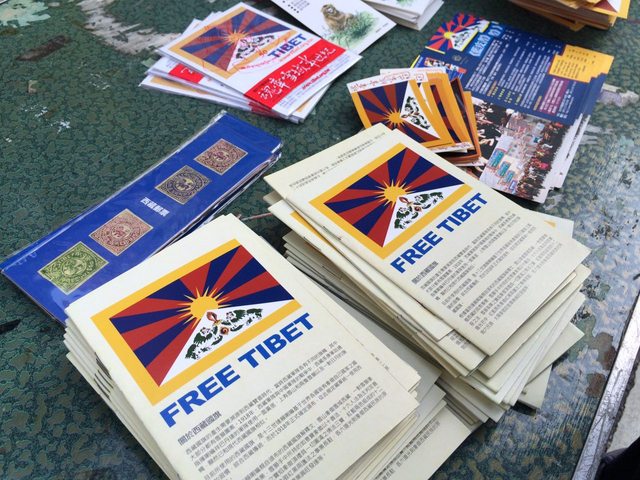 3:55pm – Social work lecturer Shiu Ka-chun and his group are protesting against government intrusion into academia. Shiu was originally appointed to be the vice chair of a research institute at Baptist University, but management told him to reconsider the appointment because he was too “high profile” and attracted “unwelcome attention.” Shiu was actively involved in the Occupy protests and was one of the MCs at the daily evening assembly during the 79-day protests.

The administration backed down & appointed Shiu after Shiu exposed it to the media, but Shiu says that Johannas Chan is another instance that shows that academic freedom is at stake. Professor Chan, Dean of HKU’s Faculty of Law, was a front-runner to become pro-vice chancellor until he became the target of a smear campaign launched by pro-Beijing papers and parties close to the government applied behind-the-scenes pressure to block Chan’s appointment 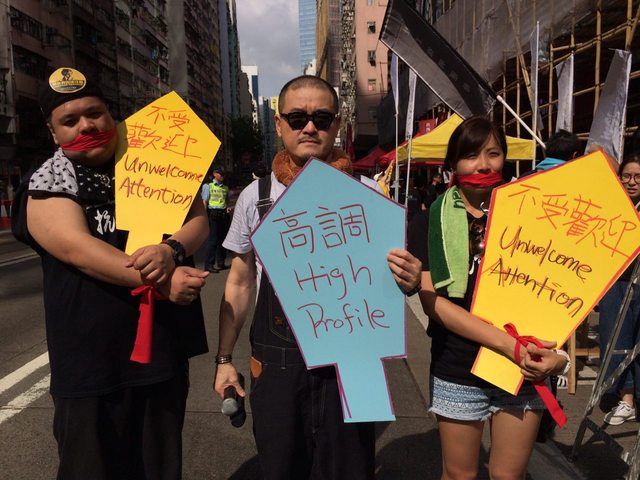 3:45pm – Charles Limbumba, 44, has been a refugee in Hong Kong for 6 years. Originally from Tanzania, he’s in Victoria Park to protest against the territory’s denial of refugees’ right to work. 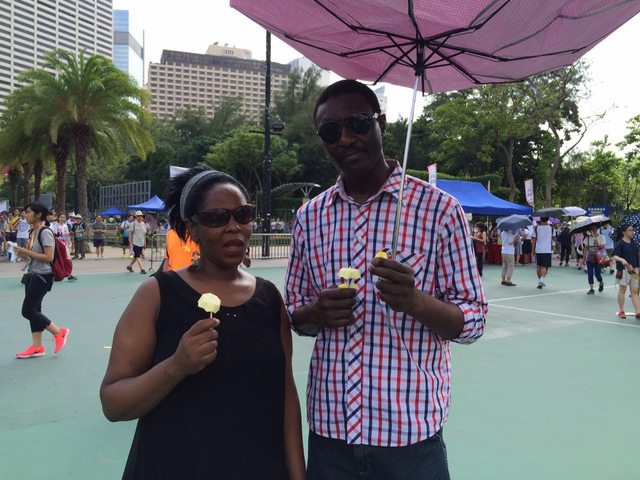 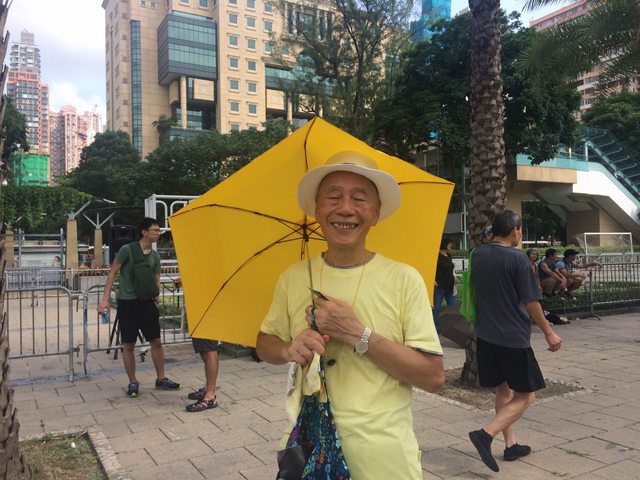 3:30pm – Occupy Central leader and HKU law professor Benny Tai: “I dont think we can use the number of people participating as a kind of indicator for the general support for universal suffrage among Hong Kong people. After two and a half years of struggle for democratic reform, I think it is reasonable for many Hong Kongers to want time for rest and reflection. I am positive that if the opportunity comes again they will stand up once more to fight for democracy in Hong Kong.” 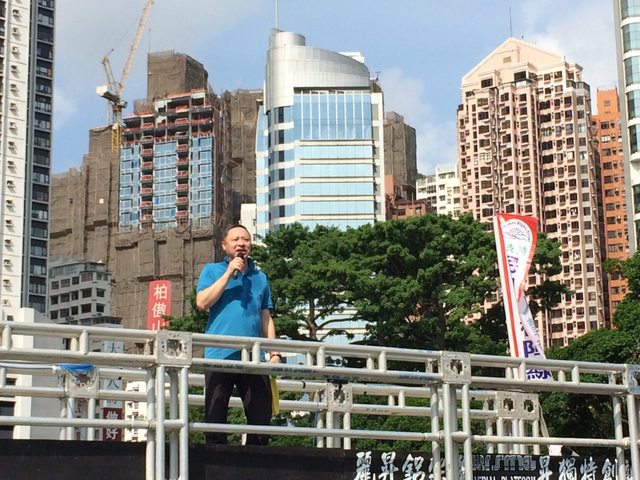 3:20pm – Artists’ Action leader Cancer Chong told HKFP: “I’m here because we didn’t win anything. The reform was vetoed, but it only means we didn’t lose. We demand universal suffrage as promised by the Basic Law.” 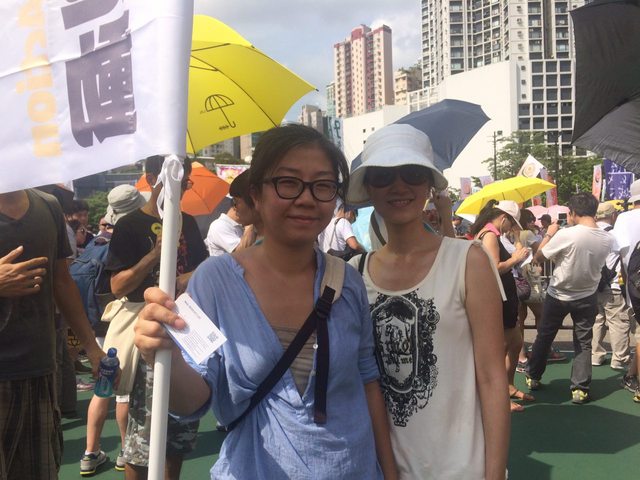 3:00pm – Pro-democracy activist Lui Yuk-lin (AKA Lady Long Hair) spotted by SocRec holding a picture of Chief Executive Leung Chun-ying with the words “rat crossing the street,” meaning a person hated by everyone. 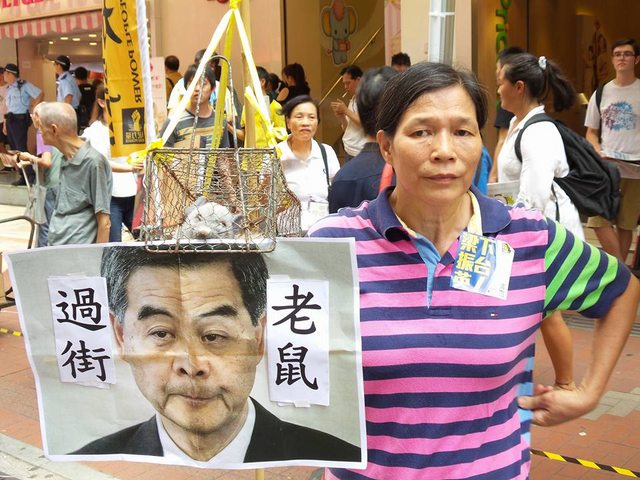 2:50pm – A second football pitch has been opened up to protesters, though turnout appears to be modest. One protester, Dennis Chan estimated that there may be fewer than 10,000 people in attendance at the moment.

2:40pm – Joe Wyatt, 20, currently a student at Edinburgh University: “I’m here because I think it’s very important to stick up for Hong Kong. I’ve lived here for the majority for my life. The veto was a good step, but it’s a first step in a long fight against this fake suffrage that’s being forced upon us, and achieving true universal suffrage.”  Wyatt previously attended West Island School.

Yu Jian from Sichuan says that he is attending to support the democratic development of Hong Kong. 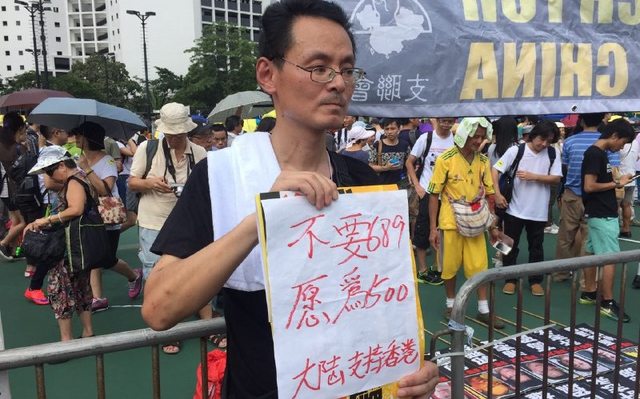 2:35pm – A counter-protest at the pro-democracy rally? Passion Times have spotted a group of demonstrations parodying the numbered shirts worn by pro-Beijing protesters during the recent political reform protests outside the legislature. 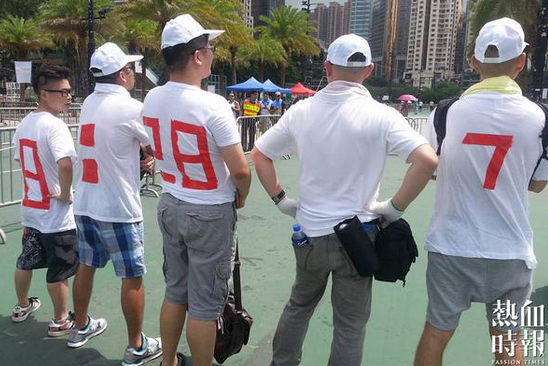 2:25pm – Rosa Mok of the Civil Human Rights Front addresses the crowd gathering in Causeway Bay: “We hope that participants can spare some time to take part in political discussions throughout the rally today. We want to ask what we can do on the 364 [other] days. While most of the time we have differences in what we think, we want participants today to find out what we can do… From the beginning, the July 1st rally is about universal suffrage. Although the political reform package is vetoed now, we still have a long way to go.”

2:10pm – Youngspiration, a new and young pro-democracy group that were formed during the umbrella movement protests, are running candidates for the district council elections this year.

Leaflet by Youngspiration – HK and China should be separated, exterminate sellouts of HK. #July1st pic.twitter.com/dg26syxqVi

1:40pm – Democratic Party legislator Wu Chi Wai told HKFP that this year’s turnout may be modest: “After the veto, we have to accept that the pressure of the political reform has been released to a certain extent. So maybe the turnout for this years demonstration will decrease, but it doesn’t hurt our concern over political change in Hong Kong.”

Alan Leong of the Civic Party told HKFP: “Whether or not we are optimistic about the rally or the democracy movement is not the question. We should do our very best to come out and let CY and the Central People’s Government and HKSAR know that Hong Kong people are not giving up on defending our values and institutions.”

1:30pm – Welcome to the HKFP Live Blog for this year’s annual pro-democracy demonstration. Protesters are convening at Victoria Park for kick-off at 2pm – tens of thousands are expected to attend.

The theme for this year’s rally is “Build a democratic Hong Kong; reclaim the future of our city”. The five demands include:

Read our explainer on the themes of this year’s event.