From the outset, this protest was never really about aunties dancing on the street, but instead a proxy fight for what many believe is the increasing mainlandisation of Hong Kong.

From as early as 6:00pm there was a visibly high presence of plainclothes police in the area. The police had clearly mobilised high numbers of officers and it would later become clear to all why that was the case. At 7:30pm, the main group leading the protest, Hong Kong Localism Power, began to set up their speakers and banners. 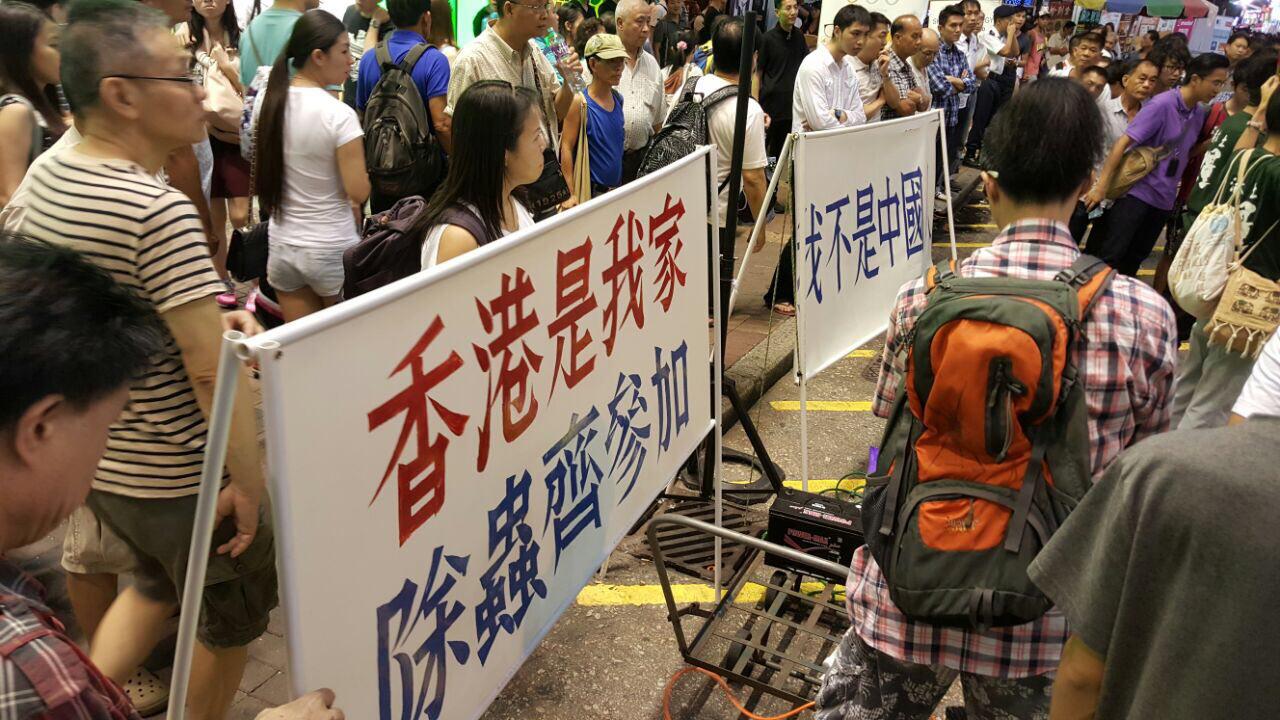 Banners by Hong Kong localism power: “Hong Kong is my home, everyone join in exterminating pests” and “I am not Chinese”. Photo: Tony Wong.

Just in front of where the localists planned to speak, police had created an empty corral with metal barricades around ten metres in length. It was not clear what the barriers were doing other than blocking half of the road from pedestrians and the increasing number of protester.

These barricades were out. Localists pushed them back. Now police anger up crowd by getting them out again pic.twitter.com/Y5m33GxACJ

At this point there were hundreds of localists in the area, who found themselves both in and outside of the newly created corral. It was all very confusing. No one could figure out why the police were so insistent on making the corral so close to the localist booth. Needless to say, this action heightened the tensions between police and protesters. The police first moved the barricades out, then moved them back, then out, then back again, but there were just too many confused people in the way. Finally the police dragged the barriers twenty metres down the road and made a new corral.

This was when the first scuffle broke out between a police officer and a protester. As with every other incident, no one had any clue as to why the police suddenly targeted one person. The crowd closed ranks and the person was able to scurry away without being detained.

Interestingly, this set the tone for the rest of the night, as police officers involved in the melee ran nearly a hundred metres down the street after the intended target. At this point the crowd demanded to know why the person was being detained as it is his lawful right, but the police did not answer. The police then hogtied the man, violently barged him through the crowd and took him to a waiting van.

If the man is found to have committed a crime, I have no problem with this slightly aggressive arrest procedure. However, bear in mind the enormous effort the police had invested in detaining this single person, and then how hands off they became once things got really serious and laws were blatantly broken.

This first arrest then led to the first pepper spraying of the night. This occurred when the police erroneously stated that their vehicle was surrounded and so needed to use pepper spray to push back the crowds. The reality was that the vehicle was behind a barrier on Nathan Road and was free to leave anytime. Protesters were only on one side, standing on the footpath and behind the barrier. There was no reason to indiscriminately pepper spray those on the footpath.

I feel so safe around these cops… https://t.co/RT0znmyO7s

While the first pepper spraying of the night was taking place on Nathan Road, it became clear as to why the police had wanted to create their corral. With a police escort that even a president would be proud of, in came a tiny contingent of Pro-Beijing supporters with flags and a loudspeaker. 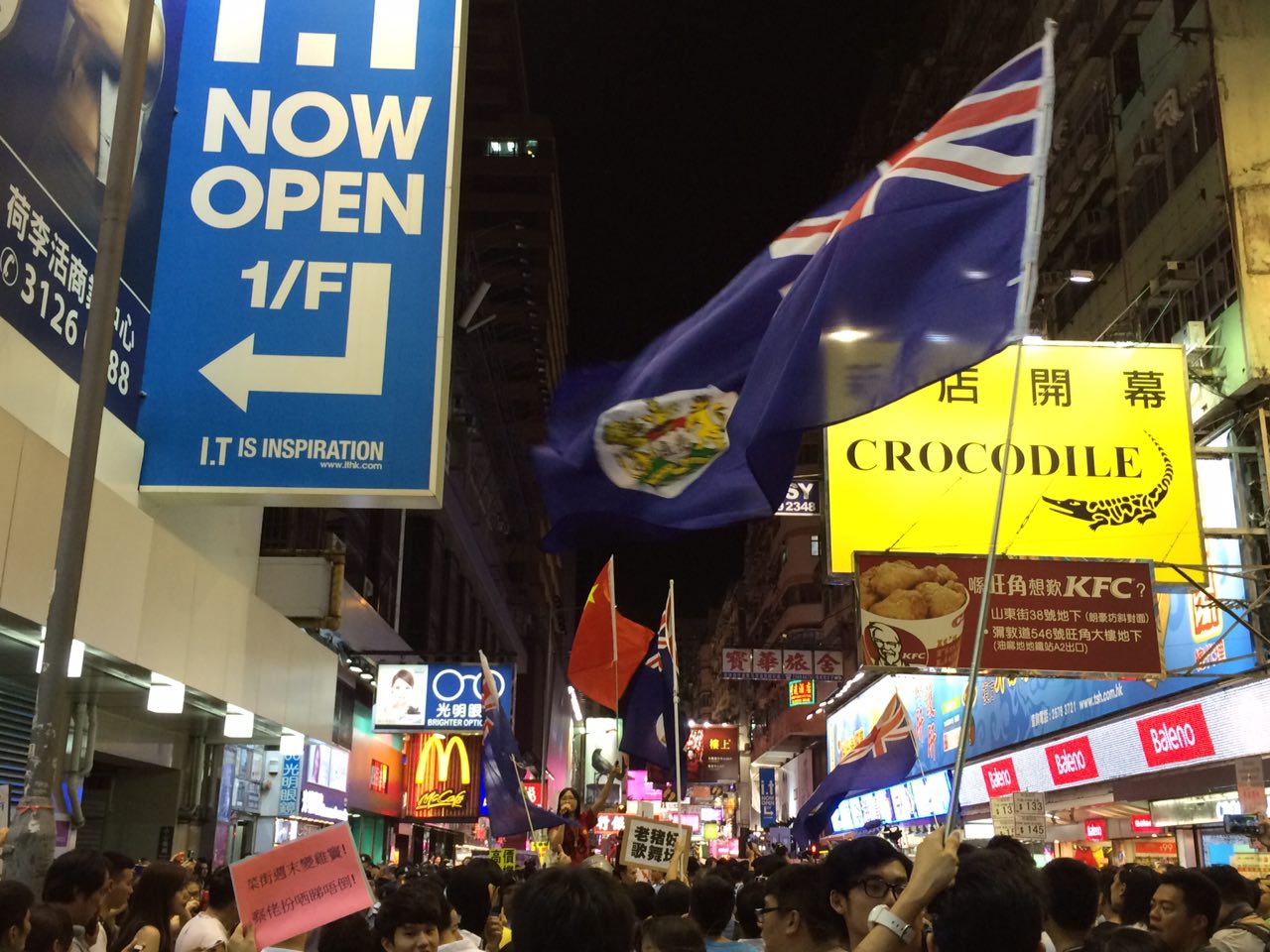 A 50-minute slanging match and flag-waving contest ensued between the two groups, divided by a very thick, blue line of police. In this regard, I thoroughly support the idea that the police are there to protect free speech for everyone but once again, we have to see the actions by the police in context. 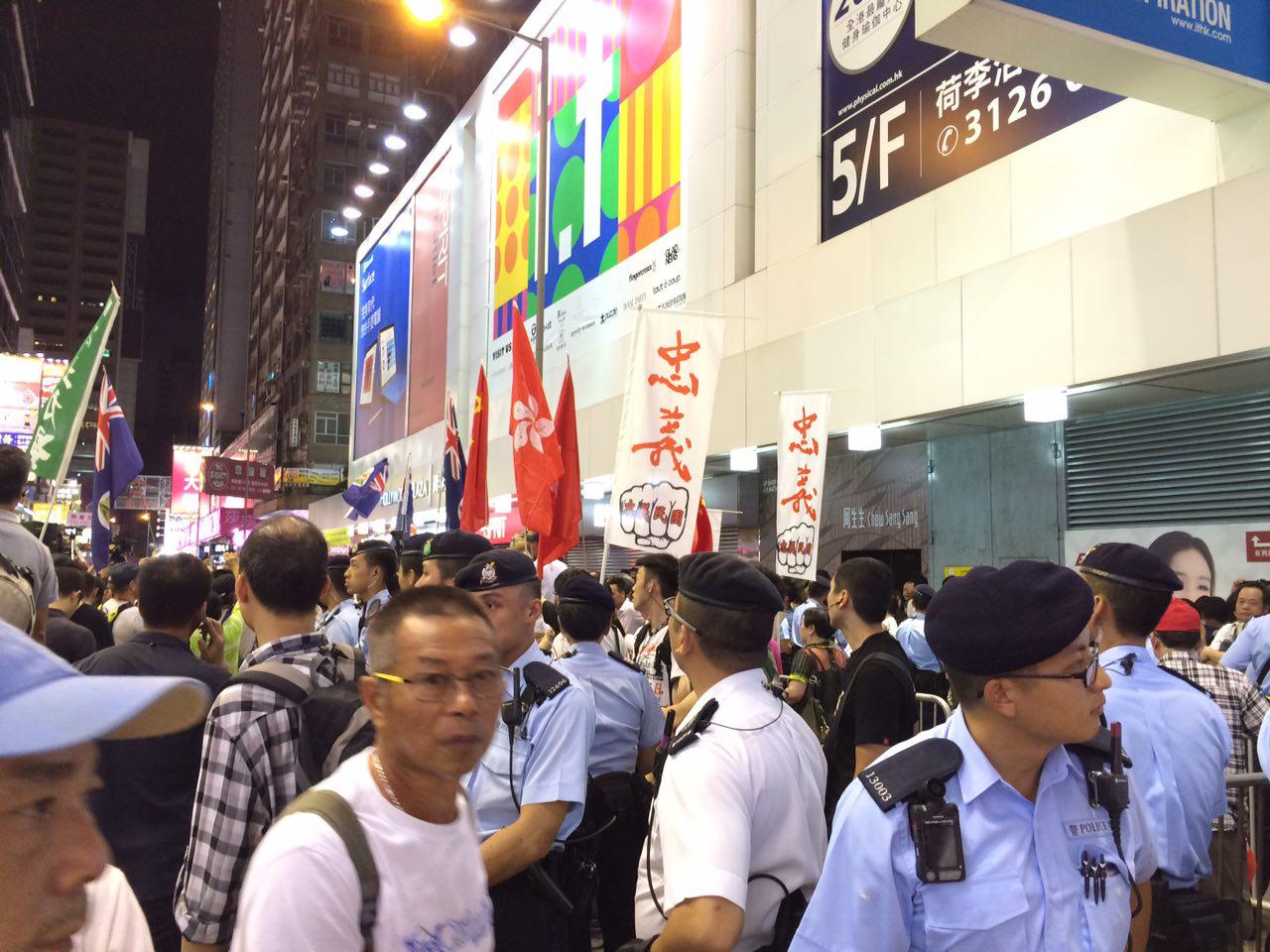 Police surrounding the pro-China groups who are behind metal barricades. Photo: Arthur Lo.

For this coming July 1st march, temporary hawkers licenses were refused to political and civil society groups. The reason given by the Food and Environmental Hygiene Department was obstruction but clearly the department is now subservient to the Hong Kong Police. Yet, the police mobilised an entire army to ensure that two Pro-Beijing supporters could stand on a stepladder and shout profanities at an already agitated crowd. The police action was tantamount to mobilizing hundreds of officers to ensure that Joshua Wong could shout abuse at five hundred CCP stalwarts.

If getting the Beijing loyalists in was impressive, extracting them was a military operation to behold. The police effectively made an impenetrable blue tunnel for them to scurry through. It was an epic, superstar treatment fit for a king.

Needless to say, tensions were now off the charts and most importantly, confidence of the “blue ribbons” in the area was at an all time high. The police had demonstrated in spectacular fashion which side they were rooting for, and so the fighting began. Not pushing and shouting like you see at most protests, but full on fist fights and assaults with isolated localists getting the worst of it by gangs of aging male “blue ribbons.”

All the serious fighting occurred on Nathan Road. As more localists began to stream out of Sai Yeung Choi Street to help those that had been assaulted they easily cornered the attackers.  So what did the police do with the assailants? They released them to the great consternation of the crowd.

So police escort out a blue into a taxi. No doubt the localist arrested will be spending night in cells. pic.twitter.com/pRvZf3iGCl

At this point, let us remind ourselves of the first localist arrested – the man was chased 100 metres down the road, hog-tied and carried onto the police van by six officers. Yet when the police were now confronted with victims of assault, with obvious signs of injury and multiple people wanting to give statements, the police let them go. No hog-tying, no violent police takedowns and no pepper spraying. Those accused of the assaults were given the friendly shoulder tap and released out of sight.

But not out of sight enough!

Protesters saw the police releasing them and were not going to tolerate it.

At this point, the police could have saved themselves a lot of legwork if they had treated the “blue ribbons” like the localists and bundled them into waiting cells in Mong Kok police station. Instead, rolling battles ensued as the localists hunted down the released “blue ribbons” assailants to demand that they be arrested once again. Serious scuffles continued all the way to Tong Mi Road, which is practically in Sham Shui Po, until once again the assailants were cornered on Palm Street.

Police then set up another defensive circle around those accused of assault until a police van arrived to finally take them away. To ensure that the police did not release them again, Ray Wong, leader of HK Indigenous, went in a police van too to make a statement. Ray was escorted by eight policemen, while the accused attackers sauntered onto the waiting police van with a gentle shoulder tap from the police.

All in all, the night was a sad example of just how much energy the police will spend on detaining localists, while going to great lengths to avoid detaining their own so called supporters.

The aunties never featured in the night, not even for a minute. The night was never about dancing. The localists chose the dancing because they knew it would raise alarms with the authorities, and true to form, the Hong Kong police showed once again that they are now just a paramilitary force set up to defend the mainland Chinese. They are happy to let clear assaults pass by in plain sight, so long as those assaulting support mainland China.