The daughter of a protester who set his arm on fire when government officials tried to reclaim land of a well-known temple said she did not expect him to take such drastic action.

The protester, Lau Kin-kwok, set his left arm on fire last Tuesday (June 16) after police and firefighters entered the Buddhist temple, which is near Tiu Keng Leng in Sai Kung. Lau was believed to be the person in charge of the temple and was sent to Tseung Kwan O Hospital for surgery after suffering severe burns.

Lau’s daughter Lau Tsz-lam told journalists at a press conference: “I didn’t expect him to perform such an act”. According to Apple Daily, she said her father had had skin grafted from his leg onto his hand. 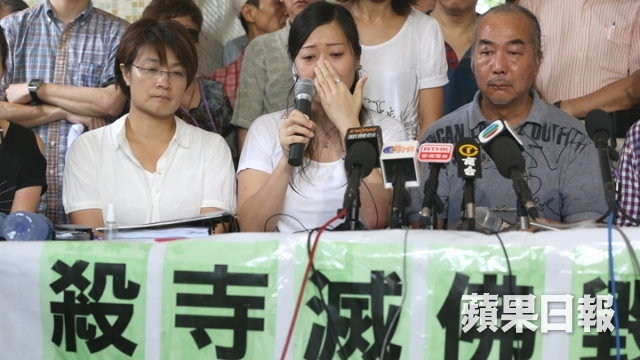 Lau Kin-man, the protester’s brother, said government officials had used coal to burn the temple’s gate and barged into the premises without prior notice. Lau criticised the authorities’ actions, saying “they treated us like terrorists”.

Numerous animals are still inside the premises, now confined by government authorities, the family said. The protester’s daughter has requested for officials to return their animals and personal belongings. While the Home Affairs Department have promised to let Kitty re-enter the premises and collect the animals, government officials failed to show up on the scheduled date, the family claimed.

Alongside Labour Party legislative councillor Fernando Cheung Chiu-hung and Sai Kung District Councillor Christine Fong Kwok-shan, the villagers protested outside the Po Yin Fat Yuen. They called the government’s plan to redevelop the temple into a heritage centre “fake conservation”, and called for an end to the demolition.

The controversy began when the Sai Kung District Council passed a bill to build the Tseung Kwan O Heritage Hiking Trail and History and Heritage Information Centre in 2014. The authorities served a notice terminating the tenancy in July 2014.

'They treated us like terrorists', says family of man who set himself on fire in temple protest