Pro-Beijing lawmakers who walked out of a key vote on the city’s political reforms have placed a half-page advert in seven local newspapers condemning the pan-democrats for vetoing the reform package.

The Business and Professionals Alliance for Hong Kong (BPA) paid for the advertisement on behalf of the pro-Beijing camp, according to newspaper Ming Pao. BPA member and commercial (first) sector lawmaker Jeffrey Lam Kin-fung led the group to walk out on the vote after his request for an adjournment was rejected by Legislative Council Chairman Jasper Tsang on procedural grounds.

Titled “Pro-establishment lawmakers strongly condemn the decision of opposition lawmakers to veto the reform package”, the statement in the advert was consistent with the government’s rhetoric in putting the blame on pan-democrats.

It argued that because the package required a minimal threshold of two-thirds of the votes, or 47 or more votes, the 28 ‘no’ votes meant the package would not have been passed anyway. “We express regrets over the rejection of the political reform and anger over the opposition camp’s rejection of the package,” the statement said. “They must be held responsible for vetoing the universal suffrage motion and blocking Hong Kong’s progress towards democracy.”

In the last paragraph, the pro-Beijing camp explained why they were unable to cast a vote: “Legislator Lau Wong-fat could not make it in time to the chamber because he was unwell. Since he sincerely hoped to cast the ‘yes’ vote and we also wanted all 41 pro-establishment legislators to vote ‘yes” in unity, we decided to ask for a 15 minute adjournment.”

After Tsang rejected their request, the statement explained, “we decided to walk out of the chamber in unison… However, our inability to seize the timing has caused the 33 legislators to miss the opportunity to vote in favor of the resolution.” It “sincerely apologises” to people who supported the political reform for the mistake. 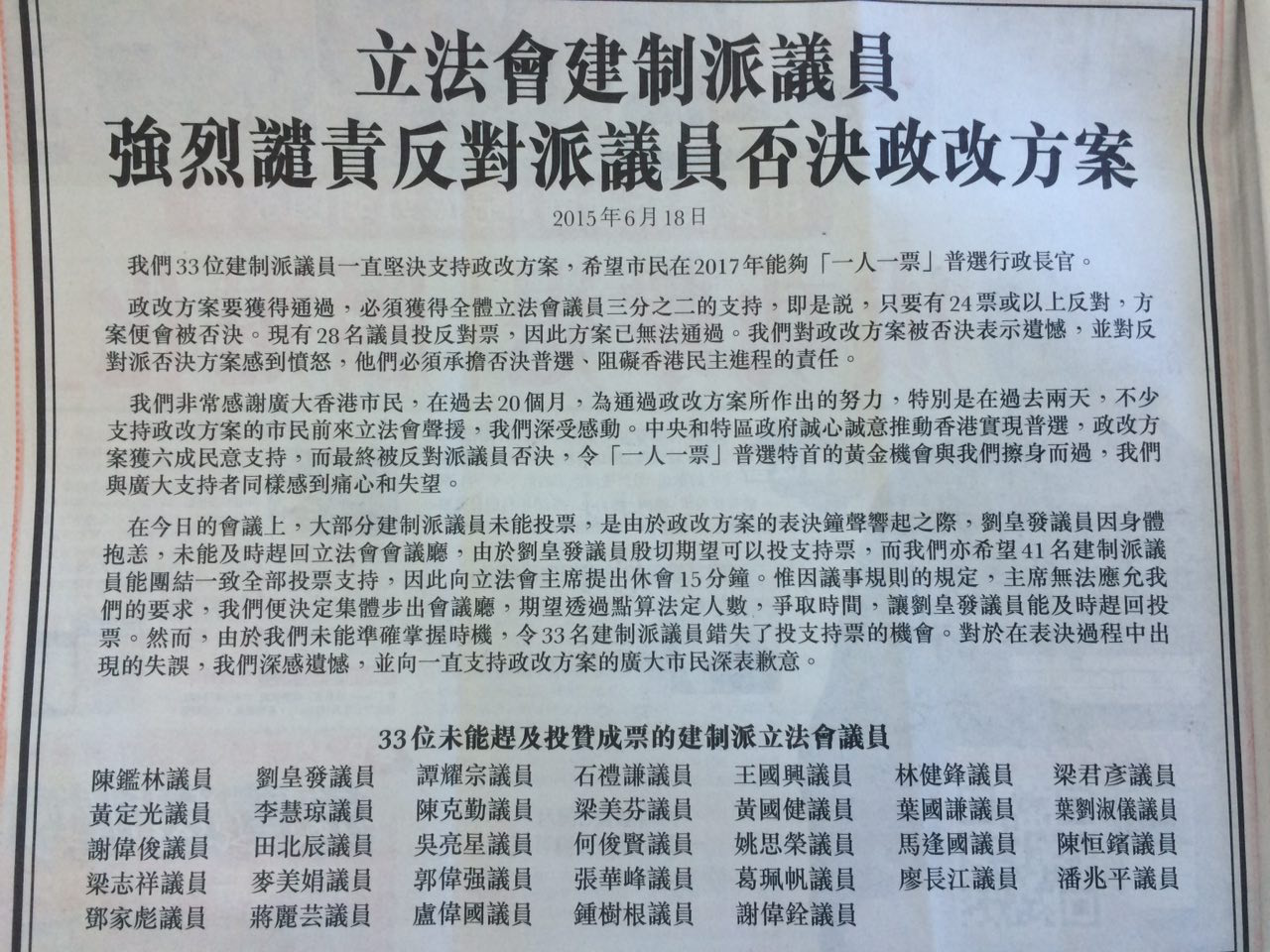 The pro-Beijing camp was yesterday reported to have been summoned to the Chinese liaison office to explain how the mistake had happened.

James Tien, representative of the pro-business Liberal Party, was among those who had remained in the chamber and voted in support of the package. Tien told the press that the party leader Vincent Fang later received a phone call from the Chinese liaison office saying that the Liberal Party “did a good job”.

In a press conference hours after the vote, Chief Executive CY Leung defended the pro-Beijing lawmakers and said they had consistently showed their support for the reform package.  He then accused pan-democrats of rejecting “most of Hong Kong residents’ wishes, denying the democratic right to elect the Chief Executive through universal suffrage.”

But the 33 absentee ballots could have turned the tide had six more lawmakers decided to vote yes.

Speaking to HKFP, pro-democracy activist Matthew Chan offered an alternative perspective. “Objectively speaking, absentee ballot is no different than a ‘no’ vote. Let’s say if all 27 pan-democrats voted yes and the medical sector lawmaker [Leung Ka-lau] ate his words and supported the reform, there would only be 36 ‘yes’ votes and the reform would still be rejected.

“The pro-Beijing lawmakers absent in the vote would objectively mean that they opposed the resolution,” said Chan. “Therefore, they would be responsible for the rejection of the package.”