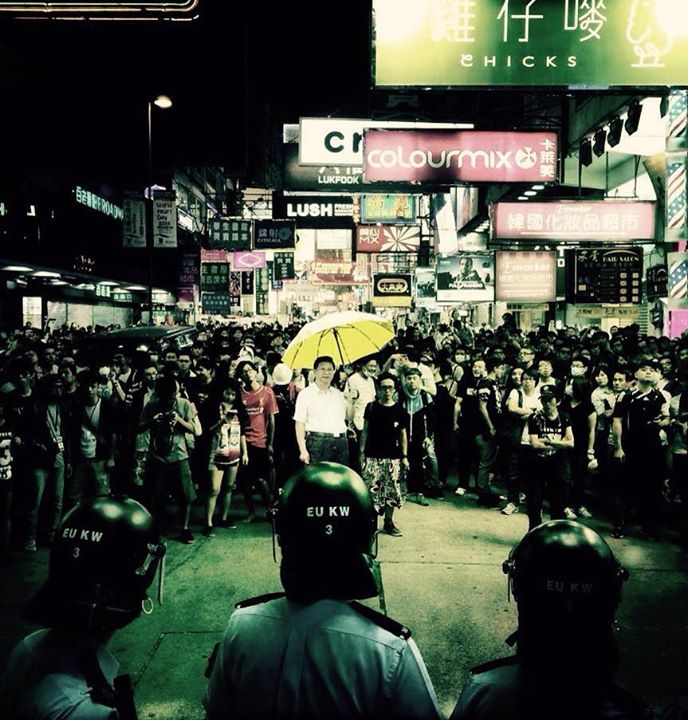 It started with Chinese state media’s announcement that a photo of Xi visiting Hubei Province won the country’s top photojournalism prize. He was holding an umbrella and talking to some engineers in the rain. His pants were rolled up to prevent them from getting wet:

The photo, which is rather typical of mainland Chinese political propaganda to push a grassroots image of their leaders, quickly caught the attention of Hong Kong netizens. They remixed the photo, placing Xi and his yellow umbrella against the background of protest sites in Hong Kong, where people have gathered to demand
an open nomination system for chief executive candidates instead of the largely pro-Beijing nominating committed insisted upon by the mainland.

Mainland Chinese media outlets are accusing the recent protests, called Occupy Central by local media or the Umbrella Revolution by foreign media, of being as color revolution that seeks to undermine the central government’s authority, a serious charge. The political memes of Xi holding an umbrella — the symbol of the protest — have been a source of comic relief given the tense political atmosphere. 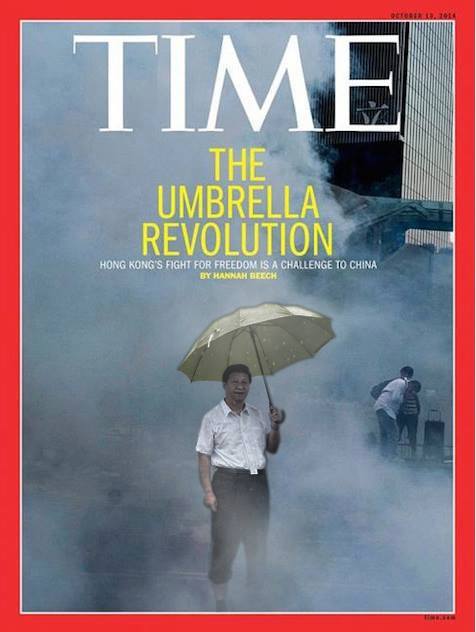 President Xi on the cover of Time magazine. Photo: Andy Sum via 100 Most Facebook.

A photoshopped image of American magazine Time’s cover showing Xi holding an umbrella in tear gas was reposted by 100most, a popular cultural magazine on Facebook, and attracted more than 10,000 likes and 800 shares. Netizen Ivan Wong commented with sarcasm:

President Xi is such a parent-like leader: He demonstrated to 689 [refers to Hong Kong Chief Executive Leung Chun-ying who won only 689 votes from the 1,200-member election committee in 2012] how to mingle with local communities and listen to people’s opinion with “an umbrella, a sincere-looking glimpse and a cuffed pant”.

The meme below shows Xi edited into a scene at Admiralty, the key sit-in site in central Hong Kong: 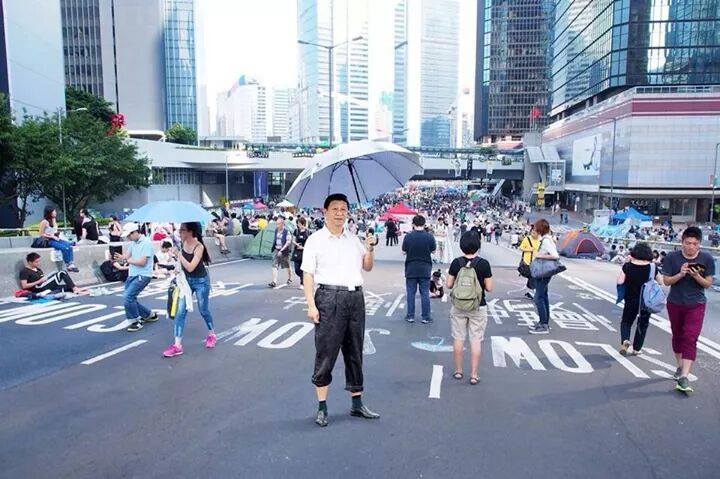 Surprisingly, Patrick Li reported that the meme has survived so far for more than 24 hours on WeChat, China’s popular messaging and calling app, without being censored.

The Xi umbrella meme confronting riot police at the Mongkok protest site is perhaps the most dramatic as Mongkok is a heavily crowded, diverse working-class commercial district where violent conflicts have broken out almost every day since the sit-in began on September 28 between police officers and protesters, as well as between pro-Beijing groups and pro-democracy protesters.

Despite several police attempts to clear the area, resilient protesters in Mongkok have non-violently reclaimed the streets. The protest site in Mongkok generally sees a more grassroots participation from lower- to middle-class background, while college students, teachers and professionals frequent Admiralty.

Netizen Stephanie Lai believed if China’s top leaders were really willing to stand with the grassroots communities like the image of Xi in Mongkok, people in Hong Kong would embrace reunification with China.

The most up-to-date meme is Xi at the top of Lion Rock in Hong Kong. The Lion Rock Hill has been a symbol of the hardworking spirit of the Hong Kong grassroots because of a popular TV drama in 1970s. 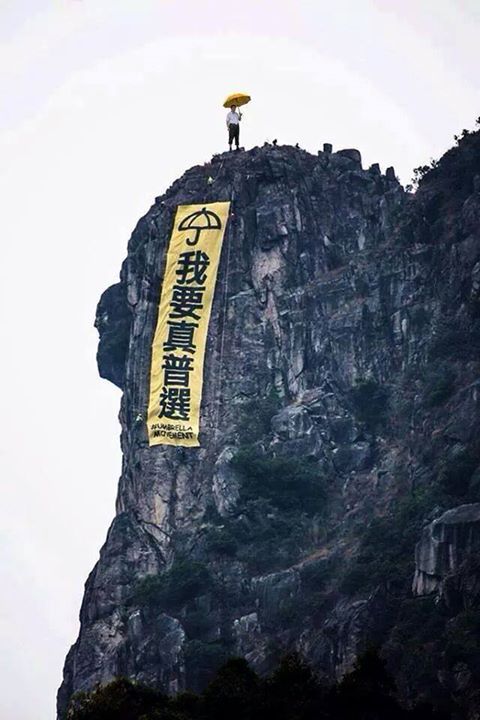 In a recent interview with New York Times, Hong Kong Chief Executive Leung Chun Ying argued that the government would not accept that idea of citizen nomination of candidates because the poor and working classes would dominate the elections. In response to his comment, a group of hikers decided to occupy the Lion Rock Hill by hanging a large banner that says “I want true universal suffrage” on October 23.

The political memes not only help the symbol of the Umbrella Revolution to travel further, but they also serve as a reminder of the role China has to play in the future of Hong Kong. President Xi keeps expressing his concern for the common people. Does that concern extend to the democratic wishes of Hong Kong’s people?